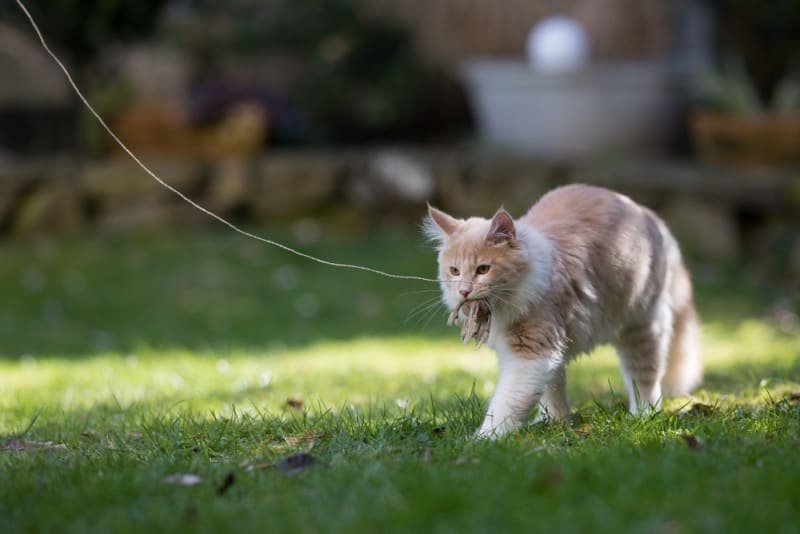 Your cat a hunter and an explorer who likes to find stuff that seems interesting to them.

But why do they bring their toys to you?

Cats bring their owners things as a trophy to get affection and from their owners. They might bring you their toy, or something they found in the yard as a present so that you can reward them with attention or yummy treats!

But could this behavior possibly be indicating a problem with your cat?

Keep on reading to find out more!

Why do cats bring their owners things?

According to ancestral research on the cat family, they used to bring back gifts and the prey. This was their way of showing respect and motivation to their owners and elders. It was observed whether the cat or the dog became a companion to the humans first.

And surprisingly, most evidence shows that cats domesticated themselves to humans before dogs. This is also one of the reasons why they have an attitude problem. Cats bring back their toys to you and meow to seek attention and gain appreciation on their hunting skills.

Other things cats bring to their owners

A few cats also bring back lost stuff from the home to their owners from places they weren’t able to look at. The cat gains trust by this and the humans love them more and more.

Many pet cats who are allowed to go outside in the backyard or the garage seem to always bring back their prey like mice or dead birds into the house and keep them on the table. The history of cats shows that they have gone through a gradual evolutionary change in themselves.

We all lose things around the house that aren’t easy to find. Your cat may find it and bring it back to you and expect a reward. The cat deserves a reward as they are helping their owners in finding lost things. There are certain features of a cat that makes them such an amazing hunter. Some of them are mentioned below:

Cats have a strong sense of smell which helps them find out stuff that has been lost. If you can’t find your stuff and it’s lost, your kitty can find it easily. Make them sniff the part of the object lost and they will sniff around the house to find the lost piece. It is said that cats have a smelling sense that’s 14 times stronger than that of humans.

The kitty out of all its senses trusts its sight the most. You might know this if you have noticed the pupils of your kitty dilate in the dark. This helps the cat to see in the dark when the lights are turned off or keep an eye on their prey so they don’t lose it and this can be easily be done with the help of their third eyelid.

Have you ever noticed the balance of the kitty while they are walking on the thin fence without falling? This is a natural trait of the cat and this helps them to get the stuff that could have fallen from the terrace or other places to pick up. Cats also get their preys from narrow places with the help of their incredible balance.

Cats have a more advanced nervous system as compared to us humans. They have the ability to sense danger beforehand and act on it to save themselves.

This could be proven from the fact that whenever the cat falls, it lands on its feet as they can sense the air beneath them and know how to land safely on the ground. This can usually be seen with the fact that they don’t let flies sit on them for a long time and shake their body to move it.

The wilder members of the cat family like lions hunt twice a day. They do this and share it with their pride and teach their younger ones to make their prey and learn how to do it. On the contrary, cats do not need to hunt down when they are provided with food at home from their owners.

Still, they should know how to hunt if they have to live there. Cats tend to be prepared for any situation that can happen with them and has to come up with it.

You must observe these small things your kitty does to know when are they preparing themselves for the hard times or preparing you for them or whether they’re ready for the difficult times to come.

Your kitty might have scratched you out of anger before or ignored your calls, but they do feel regret over their bad behavior. They would like to patch things up with their owner and get the love back from you.

So in order to make things smooth again, the kitty brings back the toy to the owner as a gift and for showing gratitude for the delicious treats you gave them. Your kitty might also do in so to gain approval for something like going outside or have their favorite treats or anything else. Basically, they’re trying to bribe you in simple terms.

Indeed, they do also need affection at their terms but getting it free of cost could be difficult. They think they might be annoying you, but they are admirable when doing such things to get attention and they get it.

How To Respond To Cat Bringing Toys

The whole family doesn’t need to be a fan of the pet cat. There could be elders who aren’t that fan of playing with the cat. They don’t like to pet the cat as much as the younger ones do and how they love to play with it.

The kitty also prefers to play with the young ones in the house as they pet the kitty for long and also play games with them. Apart from this, if there is no one present in the house and they need affection, the kitty tries to get to the older ones.

If your cat approaches you to be petted with love, try to give them the affection they need instead of letting them go as they are kind animals who need to be fed with love and affection. If your kitty is annoying you, you still need to be kind towards them because that’s just the way cats work. Pet them and play with them whenever they come to you and if you don’t want to do it, put them in the room with others who might fulfil their needs.

Whenever your kitty approaches you to be petted, give them affection and don’t let them down. Your cat brings you toys or other things as gifts or appreciation or also to teach you how to hunt or show off their skills and gain appreciation on that.

You must always know the sings of your kitty of what they are doing and why they are doing it. Bringing you toys is a way of showing great care and love. When your kitty brings you a toy in its mouth and meows, they are trying to look adorable and get love because that is all they need.