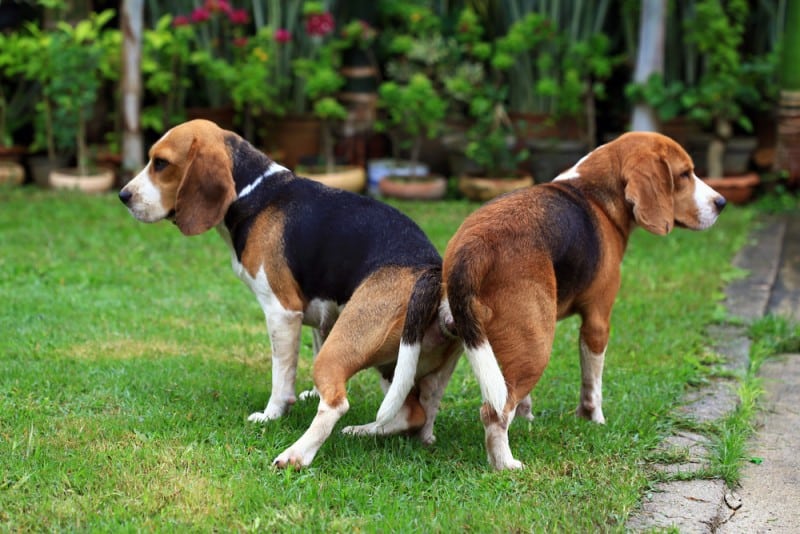 Whether you’re into dog breeding or own a pair of dogs, there comes a time where things need to happen. Mating is a natural process for dogs, just like any other animal. The pair would have intercourse to impregnate the female dog. And while all of this is pretty natural, one thing that most owners find very disturbing is when the male dog gets stuck to the female after mating.

If you’re here to search for the answer, keep reading!

Unlike most other animals, dogs experience what’s called the copulatory tie. This is another natural process that takes place when dogs mate. And if you have never seen it or are scared because you just witnessed it, it can be a little worrisome and strange because usually, the dogs are stuck with their rear end against each other. This is the tie!

Even if you are aware of the concept, owners can get a little anxious while witnessing it. Also, since most dog owners do not have enough information about the copulatory tie, they don’t even know how to react or what to do in an event like this.

Is it painful for my dog when it gets stuck to the female after mating? How long should I expect my dogs to stay in that position? Can I do anything to untie them? What else can I do to make this easier for my dogs?

If you are concerned with all of these questions in your head, we will demystify the concept of the copulatory tie in this article and help you understand why it isn’t as crazy or weird as it looks.

Let’s buckle it down!

In this duration, your dogs may turn their rear ends towards each other and may even look distressed. If your dogs are mating for the first time, chances are they would even whine and be uncomfortable. But the truth is, a copulatory tie for dogs is as natural as mating itself and therefore, there’s no need to panic.

But why does it happen?

When the male dog penetrates inside the female dog, the bulbus glandis at the head of the penis starts to grow and swell. Even after the ejaculation, it becomes impossible for the dog to withdraw the enlarged organ from the female dog’s narrow opening.

You can learn more about copulation in this video:

It could take up to 30 minutes for the bulbus glandis to shrink back to its normal size and for the dogs to get separated again. During the copulatory period, the male organ will continue to ejaculate seminal fluids to impregnate the female dog.

The Different Stages of Dog Mating

Another important thing to remember is that the copulatory tie is just one of the stages that occur during the mating of two dogs. And if you’re new to this, it’s a natural reaction to panic and feel worried about your dog.

There’s absolutely no reason to feel overwhelmed with this, especially because there’s nothing you can do about it. It could be a little uncomfortable but panicking will only make it worse for your dogs. To understand the whole process, let’s learn about the different stages of dog mating.

Unlike humans, the mating process of the canines would look like this:

Mounting: The first step for canines is to get the hint of the female dog to begin with the mounting. The female dog hints through ‘flagging’, which is flaunting her rear to the male dog, signaling that she’s ready. The dog will then mount on the female dog to start the act.

Finding the Vulva: The next step after mounting is to find the vulva. Sometimes, it can take a little while for the male dog to locate the vulva. If you see your dogs struggling with this, you can always assist him with it.

Ejaculation: After finding his way inside the female dog, the male will release his own sperm along with the prostatic fluid as he continues to hump the female dog.

Copulatory Tie: This is where it gets a little uncomfortable. After the ejaculation, the dog will try to withdraw his penis from the female dog’s vagina but will get locked instead to their rear ends. During this process, the dogs are usually stuck by their rear ends and facing in the opposite directions.

Releasing – Once the organ gets back to its original size, the dogs will naturally release on their own. By this time, the sperm is securely deposited into the female dog to impregnate her.

To prepare for the arrival of the newborns, you might want to consider getting toys for the new puppies!

Do not try to intervene during the copulatory tie, let alone trying to separate them. The purpose of this tie is to ensure depositing the semen inside the female without the slip.

And while 30 minutes is a normal duration, some dogs, especially the virgins, can get stuck for about an hour. This is both bothersome and agonizing for the dogs. The duration also depends on the time your dog requires to ejaculate the sperm into the female dog.

Patience is the key here – for both you and your dogs. Wait for your dog’s bulbus glandis to revert back to its original size and your dogs will easily get separated.

This is the major concern for dog owners.

So how much pain is felt by both dogs during the copulatory tie?

Unless it’s their first or the second time, a copulatory tie isn’t painful for your male dog. However, some dogs may find the swelling of their bulbus uncomfortable and may try to withdraw their organ from the female in anxiety. Since it’s not possible for their engorged penis to come out, it can hurt the organ.

Female dogs, on the other hand, may feel more pain than the male dog out of a tie, especially if she was a virgin. Instead of trying to separate them – which you must never – try to calm your dogs. When you find your dog stuck in the tie, comfort the dogs so they do not get anxious.

How to Unstuck Your Dogs?

So what do I do when my dogs get stuck? Here’s everything you need to know:

Contrary to what we think, canine reproduction can be a little overwhelming and complex. The process requires proper courtship so that both the dogs are ready for mating and copulation.

So if you’re ready for pups, it’s important to learn these little facts and be there to supervise your dogs for a healthy courtship. Comforting them during the copulatory tie is the best thing you can do for your dog.

Got something to share with us? Reach out using the comments section below!