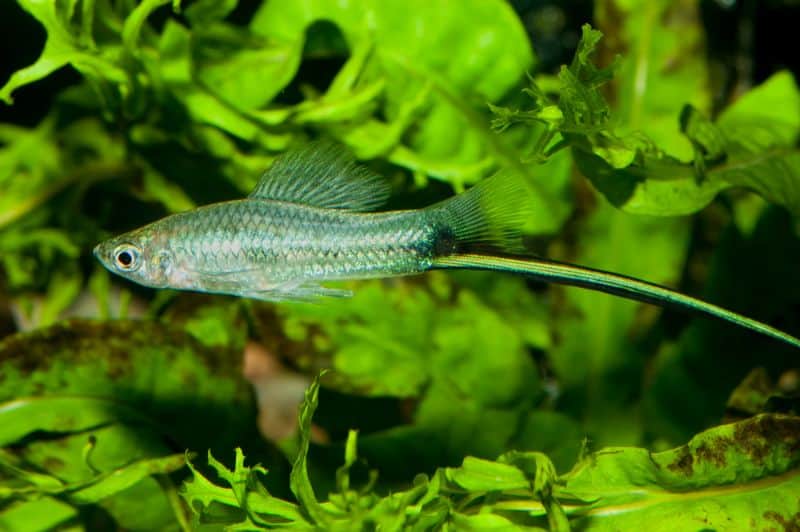 Tropical fish like the swordtails make excellent pets. They are hardy, as well as bright and colorful. But when swordtail fish do weird stuff, such as swimming up and down, it can cause quite some confusion to the owner.

Now that we know that this behavior is not due to some kind of disease, we can continue to look at it in more detail and figure out ways to make the tank a more fun place for these little pets.

Swordtail and many other fish pace the glass, which is the term for swimming up and down, when they are bored. It is a common behavior among these tropical fish and can be due to the following reasons.

Most commonly, the fish do this when they are introduced to a new environment. When you bring the swordtail fish to your home or put them in a new tank, they will be eager to explore around and as a result, swim up and down the tank.

If the fish is not new to the environment, they may be bored due to a dull environment. If you lack decorations in your tank, the fish might get bored and swim up and down to keep themselves entertained. Make sure there are other friendly fish within the tank of the same species or any other tropical fish like the platies.

Swordtail fish will also quite often follow their reflection in the glass and playfully chase it. In order to reduce this kind of behavior in the fish, add some more decorations, plants, rocks or any other item that might make the fish comfortable in their environment.

Poor water quality could cause the swordtails to pace up and down in the tank as it induces stress in them. Make sure that you keep the water quality up to the mark by checking all parameters. This includes water pH, temperature and the nitrogen cycle for beginners. The ideal pH for swordtail fish is 7-8, while the water temperature should be within the 72°F-78°F range.

Nitrogen cycle should also be regularly maintained, which can be done through an inexpensive kit. Perfect water conditions will safeguard the swordtail fish from any sort of stress and showing usual behavior, which also includes going into hiding. More importantly, when you have stress-free fish, they are likely to cause fewer problems and will rarely get sick.

Even though swordtail fish are generally peaceful creatures, they can definitely show aggressive behavior within their own species and chase each other. This will cause the swordtails to swim up and down the tank. Due to this reason, it is absolutely crucial to maintain a proper gender ratio of swordtails within one tank.

If you plan to buy swordtail fish, make sure you purchase one male for 3-4 females.This is due to several reasons. If you buy a single female swordtail for one male, the male will most likely stress out the female, leading to her death. When there are 3-4 females per male swordtail, the females are relieved from a lot of mating stress.

When there is more than one male swordtail in a tank, they start showing aggression and fight quite often. Apart from getting injured, the dominant male will stress out the weaker one enough to cause it to die. So, it is crucial to avoid placing two or more male swordtails in a relatively small tank.

If you notice your fish putting in a lot of effort to move, as if it’s struggling to swim forward, this could indicate a serious problem. When fish shimmy, it is a sign of a problem with the water. Usually, this is the result of unchecked ammonia and nitrate levels in the tank which causes the fish to display such behavior.

For beginners, you can use wonder shells to help absorb these toxins. If you keep a regular check on the toxin levels and replace water frequently, this shouldn’t be a problem. However, taking long gaps between water checks can cause great harm to the fish’s health.

Fish swims up and down nonstop (Video)

Why did my swordtail suddenly become inactive?

Seeing your fish not eat and suddenly become inactive can be quite worrisome for the owners. There can be many reasons why your swordtail is acting this way, but mostly, it’s something that can easily be treated through medication.

Swordtail females usually stop eating and become lethargic very often when they are near the time of giving birth. During this time period, they try staying isolated and are probably just looking for a good place to give birth. This behavior is normal and you have nothing to be worried about unless the fish continues this behavior after giving birth to its juveniles.

If a swordtail or any other live-bearing fish shows this behavior, it is usually caused by a parasite infestation. These parasites do not allow your fish to get enough food and as a result, the fish quickly gets weak and catches a bacterial infection. These events can quickly kill your swordtails unless you take action in time.

To treat this problem, your best bet is to first provide your fish with anti-bacterial medication followed by a water change. This should be continued with an anti-parasitic medication to completely restore the swordtail’s health. It is preferred that you treat the fish in a separate tank to avoid the disease from spreading and keep the other fish from getting ill.

Usually, medication will solve the problem within some time, however, if the problem persists, it could be due to Tuberculosis. This is an untreatable complication in fish and your best bet is to let the fish die. Tuberculosis in fish can easily be spotted as the fish becomes inactive and loses its appetite.

How long does a swordtail fish stay pregnant for? The normal gestation period for swordtail fish is 28 days. It might be difficult to determine when it will give birth, but signs like a swelled belly and a dark spot on its back fin will signal that the time is near.