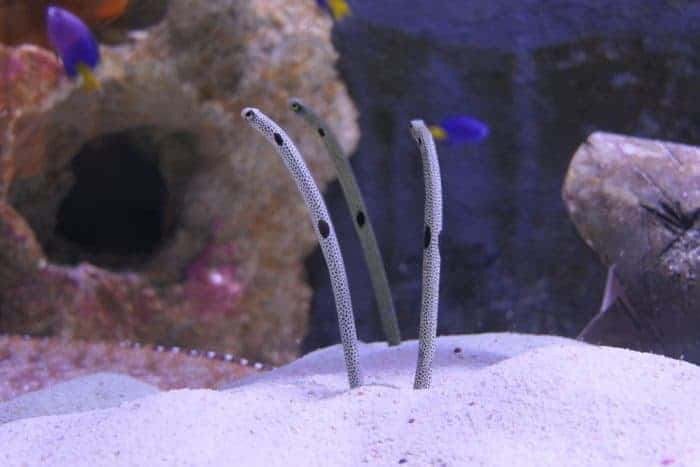 In our daily life, the word worm is spoken for different organisms such as larvae, insects, roundworm, millipedes, shipworms, fluke and caecilians etc. worms are occasionally found in the Fish aquarium which may be indicative of possible shortcomings in respect of maintenance of aquariums.

What is the difference between internal and external parasites? 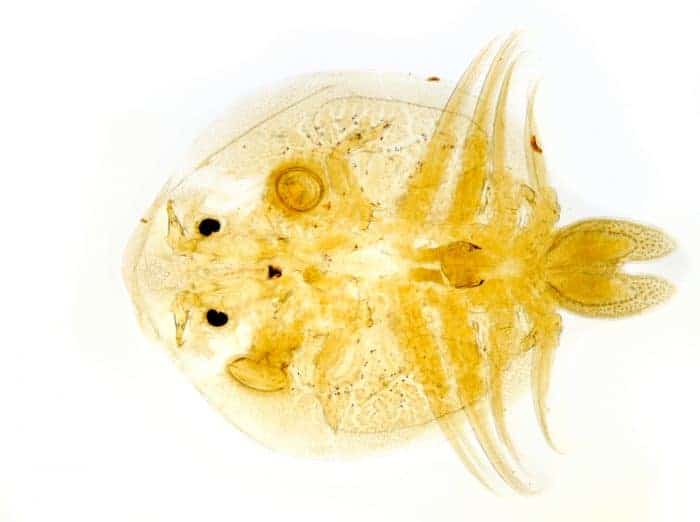 One way to differentiate between the two types is that endoparasites are found inside the body while the latter, can be found on the external surface of the body.

How to categorize worms?

Worms are either parasitic or non-parasitic in nature.

They are however referred to as Platyhelminthes in both the cases.

They have leaf-shaped, soft and flat bodies and don’t have any organs.

Get Rid Of Worms In Fish Tank Aquarium (Video)

What are the different types of worms found in an aquarium?

There are a variety of worms that you can find in your aquarium, these include

Let’s explore each one in detail.

They are known as Helminths, and they are known to cause illness in an aquarium as they live within and on the fish.

These include tapeworm, roundworm, and flukes.

They are usually invisible, as they are small in size.

These organisms are known as Planarians.

They thrive in an unhealthy aquarium and may not be as harmful as other parasites.

They do create an unhealthy environment.

Planarians are known to belong to one of the many flatworms of the class, Turbellaria.

They are mostly hermaphrodites i.e. they have both male and female reproductive cells.

They are found in both saltwater and freshwater aquarium,

Also, freshwater fish are known to enjoy eating these parasites

They are asexual and are known to regenerate especially if they are divided by cuts across their bodies.

How to get rid of Planarians?

A Planarian infestation may occur if uneaten fish food stays in an aquarium for too long.

This occurs when you overfeed your fish or don’t clean your aquarium.

They start reproducing themselves, therefore, it is essential to either kill them or altogether remove them out of your aquarium.

We found some easy ways to get rid of them,

Cestodes are called tapeworms, and they are flatworms. They are known for absorbing nutrients from the host.

They are famously known to disguise themselves to avoid being digested by the digestive system of their host.

These are commonly spotted on the outside of the fish on their skin or fins.

These form spots in yellow, black or white color

Monogeneans are flattened body parasites, ectoparasites and can be easily identified on the gills, fin, and skin of the fish as they cling to these areas causing infection. 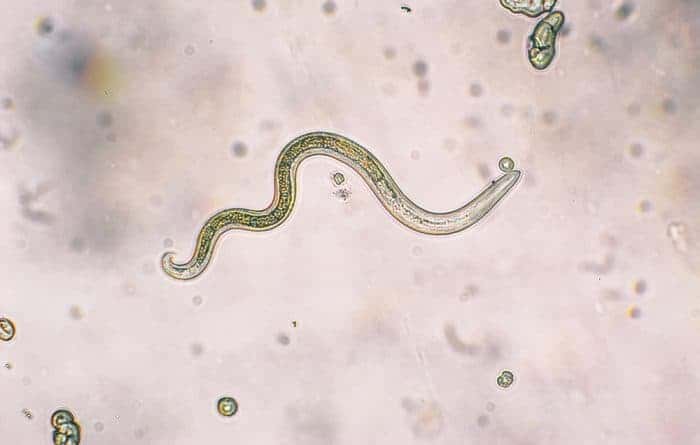 They are known to have many parasitic forms, and they consist of hookworms, and roundworms.

They are internal parasites and live in the digestive system of the fishes.

They have a complete digestive system as compared to other parasitic groups.

Theirs reproduce sexually, and females are larger than males

A sub-group of Annelida known as Detritus Worms includes a segmented group of worms that includes leeches and earthworms.

Even though they do not harm aquarium fish, but are well known as decomposers.

They are tiny and thin, n white and brown strings.

How can Detritus Worms Be Introduced in an Aquarium?

They can enter your aquarium through the new fish, plant or during the transferring process of gravel from one tank to another.

They play an essential part in maintaining the ecosystem of the tank.

They reproduce rapidly that can get out of control

How to get rid of Detritus Worms?

The rapid reproduction of Detritus Worms is usually challenging to control;

Therefore we found some ways to help you out. 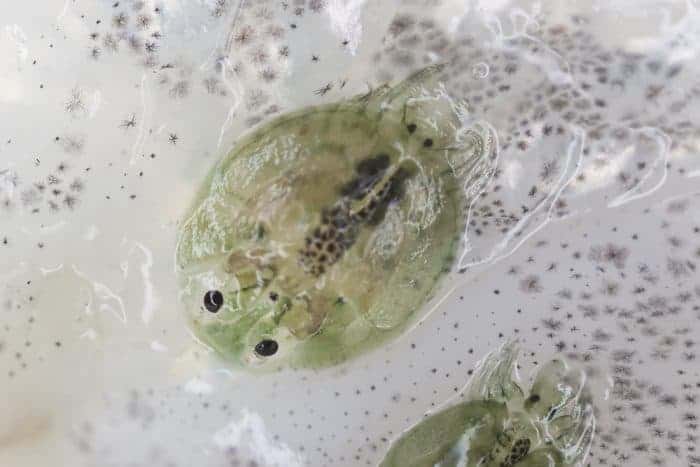 They are the most difficult ones to spot as they hide by changing their color similar to the color of its host.

To get rid of this parasite, the fish usually rubs itself with different objects in the aquarium.

Worms That You Should Be Concern About

Even though all worms can cause havoc in an aquarium, affecting a fish’s life span and health. Some worms can be extremely harmful to fish. These are

Let’s take a look at them in detail so that you can easily recognize them next time you notice your fishes behaving oddly!

What Are the Main Reasons of Having Worms in a Fish Tank?

Steps to Build a Worm Trap for Aquarium

Worm traps are available commercially, but we can help you make one at home too!

All you need is

The steps are as follows,

It is, however, important to make sure that the jar is not transparent as the main idea is to attract the worms to the smell of the bait rather than seeing it.

How to identify invisible worms?

Most of the parasites are invisible, tiny and difficult to spot. Some ways can help you spot one easily by observing the things mentioned below,

How to get rid of microscopic worms?

How to deal with different types of Worms?

Worm invasion becomes easy when the aquarium is not taken care of.

Therefore, let’s see how can they be taken care of,

This step will make ensure that the fishes and the ecosystem of the aquarium remain healthy and intact.

At times it is essential that an expert opinion is taken from a fully trained professional related to using different techniques or medicine to eliminate parasites.

Make sure Aquarium is Clean

Keeping your aquarium clean can minimize the number of parasitic invasions; therefore it is essential that this step is dealt with proper care and attention.

Keep a check on your fishes

It is essential that you regularly monitor your aquatic pets. Visible parasites are easy to notice; this can help with early prevention of parasitic outbreak.

Parasites can cause loss of appetite; therefore, it is vital to ensure that their food intake is regularly monitored.

Look out for symptoms

Some symptoms are easily noticeable, such as red or white patches, cloudy eyes or bloating. These are signs that parasites have invaded the aquarium territory.

At times it is crucial to replace the filtration system of the tank with efficient mechanical filters so that the aquarium remains clean and hygienic and less manual effort is required.

Are All Worms Harmful to Fish?

Well, as dangerous as these tiny organisms look, not all of them are harmful to the fishes in a tank.

Some worms may simply get introduced through plants or food.

Therefore, the aquarium just needs to be kept clean to prevent them.

Some worms are good for fish as they provide them with rich and raw nutrients, proteins and fats, such as earthworms.

Is Contact of Worms in a Fishtank, Harmful for Humans?

Parasitic and non-parasitic worms are usually harmful to fishes, plants or animals. However, their tendency to harm a human varies on their types and their subcategories.

It is recommended that fish owners follow hygienic procedures to avoid any kind of risk of diseases that can spread due to contact with parasites.

Why does a fish tank turn cloudy white? It usually happens when you set up a new tank. One of the main reasons for water in aquarium turning milky cloudy is bacteria blossom.

When bacteria invade the home space of fish, it means that it is undergoing an initial nitrate break-in.

It usually takes time for beneficial bacterial colonies to establish in a new aquatic boundary.

The aquarium then reverts to clearness once the bacteria starts settling in.

How to reduce the risk of acquiring an infection from a fish tank? As a result of direct contact with the aquarium, there are high chances that the fish owner can be infected. It can be minimized by following these listed below,

It is essential to change at least 10 to 15 percent of the water every week.

Whenever water is changed, it is advised to let it age for at least one day.

Is it okay to add too many fishes in one aquarium? This is one of the most common mistakes that is usually done by newbies. It can be challenging to take care of too many fishes at once.

At the initial stage, it is important to make sure the environment of the aquarium is stabilized for the fishes, which includes the pH level, hardness and the temperature of the water.

Secondly, adding too many fishes at once can destabilize the water of the aquarium.

It is essential to make sure that the personal chemistry of the fishes’ match with each other. It is recommended to have some experience beforehand and some background research before taking this decision.

Also, it is important that the temperature of the aquarium is controlled.

They are expensive, require care, and best suited for specific fishes; therefore they are not recommended for beginner aquarists. Consequently, one should make sure that they consider all the factors before planning to start a saltwater aquarium.

Contents show
What is the difference between internal and external parasites?
How to categorize worms?
Get Rid Of Worms In Fish Tank Aquarium (Video)
What are the different types of worms found in an aquarium?
1. Parasitic Worms
2. Non-Parasitic Worms
How to get rid of Planarians?
3. Cestodes
4. Trematode
5. Monogenea
6. Nematoda
7. Detritus Worms
How to get rid of Detritus Worms?
8. Fish Lice
Worms That You Should Be Concern About
Steps to Build a Worm Trap for Aquarium
How to identify invisible worms?
How to get rid of microscopic worms?
How to deal with different types of Worms?
Quarantine
Consult a Professional
Make sure Aquarium is Clean
Keep a check on your fishes
Closely monitor your fish’s eating habits
Look out for symptoms
Upgrade your filtration system
Are All Worms Harmful to Fish?
Is Contact of Worms in a Fishtank, Harmful for Humans?
Related Questions
Other Sources