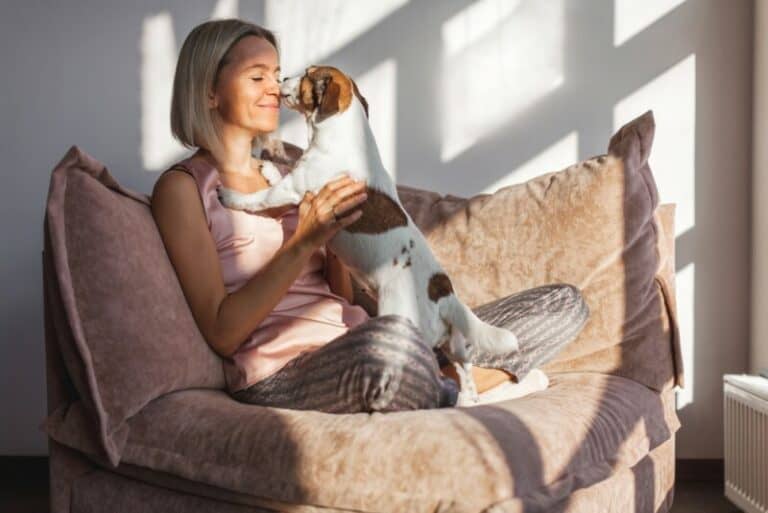 A dog that licks its owner isn’t exactly headline news. Dogs like to explore with their noses and tongues. But what happens when your dog licks your arm incessantly? Why does your dog lick your arm so much? and should you be concerned about it?

So, what should you do when a dog spends too much time licking your arm? Fortunately, it isn’t a cause for concern. Dogs lick your arms for many reasons, some of which are:

It’s important to pay attention, though. Too much arm-licking can also mean a dog is anxious or bored.

Read on to learn more about why dogs will lick their owners’ arms and what steps owners can take to stop the habit.

While there are many possible reasons why your dog licks your arms, none are particularly concerning. However, every owner should consult their veterinarian if they feel something is out of the ordinary.

It’s a widely known fact that dogs lick to show affection. Often, they lick your arms and face to express their love for you.

Beyond expressing their love for their human, they may sense that their owner needs extra affection. A dog may be able to tell when its owner is feeling particularly down. The furry friends respond with more affection than usual to show empathy.

So, owners who find their dog licking their arm more when they are sad don’t have to worry about their pup. Instead, they should focus on feeling better, and an end to the licking will follow.

Dogs may lick their owners to soothe themselves. If this happens too much, it may be because the dog has anxiety.

Maybe a dog’s family is changing their routine. Or, the dog could have fears, like being home alone or loud noises. These factors are common causes of anxiety.

While licking can be a harmless symptom of mild anxiety, consult your veterinarian if symptoms persist or worsen. Experts say that untreated canine anxiety can lead to behavioral disorders.

A dog may be licking its owner’s arms out of boredom. The licking could come from a need for stimulation. It can also be that the dog wants its owner’s attention so that they can play together.

Enrichment activities are a vital component of a dog’s health. It is critically important for puppies and high-energy breeds.

Owners who suspect their dog is licking their arm due to boredom should immediately add enrichment to their pup’s routine. Excessive boredom can lead to depression.

Licking is an early sign of boredom, so owners have no reason to be too worried. Luckily, toys, scheduled playtime, and long walks can alleviate boredom.

As puppies, dogs learn to lick as a grooming method from their mothers. They hold onto this skill for the rest of their lives. They will often practice grooming other dogs and puppies.

Sometimes, they like to groom humans, as well. The grooming may include licking the owner’s arm, an accessible part of the human body.

Grooming is both a favor and a sign that they are a part of their owner’s pack. It’s no cause for concern, and you should feel flattered that your dog sees you as one of its own.

When humans sweat, a salty residue remains on top of their skin. Dogs may lick their arm because they enjoy the salty flavor.

A few different things come out in human sweat. These include:

For a dog, these substances are incredibly appealing. They may even find their owner’s sweat to be nourishing.

An owner may also have leftover food or drink on their skin. People may no longer see or smell it, but a dog’s finely tuned senses allow it to spot the residue. They may not be able to help themselves when it comes to having a taste of their owner’s dinner.

In the wild, dogs submit to the alpha of the pack. They demonstrate their submission by licking their leader. If your dog acts timid while licking your arm, it may signal loyalty toward you.

Is It Okay for My Dog To Lick My Arm?

Humans should ensure that the dog isn’t licking around an open wound. A dog’s tongue carries bacteria that can lead to infection should it get into the wound.

Otherwise, no one should be hurt when a dog licks its owner’s arm. Of course, owners should wash themselves immediately afterward, just as they should when handling the pup in any capacity.

How To Stop a Dog From Licking

You can use a few different methods to get your dog to stop licking them, including:

However, the first step to curbing the dog’s habit is to address the root cause of the problem.

14 Signs Your Dog REALLY Loves You, Confirmed by Science

There’s such a thing as too many kisses. A dog that excessively licks its owner’s arm may not have a serious problem, but it’s still important to address its needs. They could be experiencing anxiety or boredom, which could spiral into larger issues.

The dogs could also just be showing affection or grooming their human. Always consult a veterinarian for any doubts or concerns. 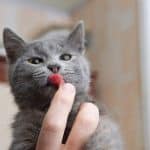 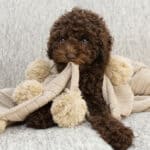 Why Does My Dog Chew on Blankets