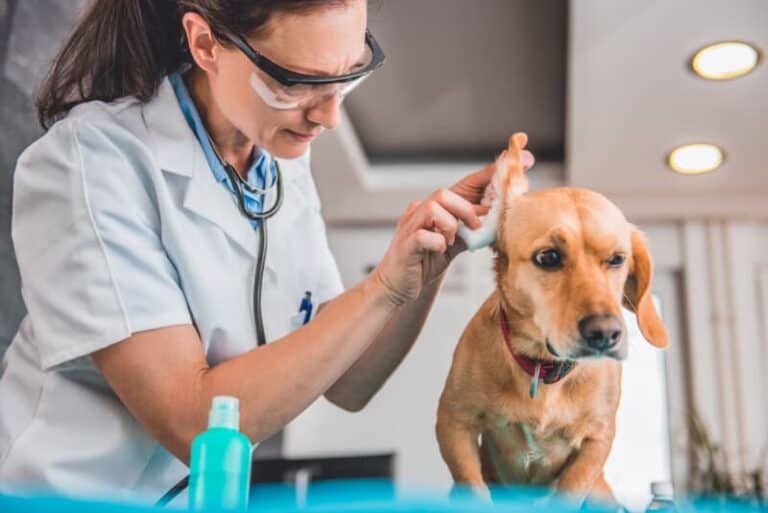 Your dog’s ears are one of the most sensitive, important, and expressive parts of their body. Not only do dogs use their ears to hear, but they are very essential in maintaining balance. Dogs also express emotions through their ears. The posture and position of a dog’s ears at any given time tell the story of how they’re feeling, such as curious, happy, or afraid.

A bump on your dog’s ear could range from a mild skin infection to a malignant tumor. Any medical complications or conditions which cause damage to the ears risk the dog’s sense of hearing and also affect them in various other ways. The psychological harm that hearing loss could cause to a dog should not be underestimated.

Why Does Your Dog Have A Bump On His Ear?

Following are the few causes for a bump on your dog’s ear:

We’ll dig deeper and discuss these causes and their treatments in depth for your knowledge. Let’s dive in…

One of the most common reasons for a bump on your dog’s ear is a hematoma – also known as aural hematoma. This is an accumulation of blood between the cartilage of the ear and skin. It is most commonly found on the inside flap of the dog’s ear. The most common cause of an aural hematoma is trauma, including blunt force, such as being hit or getting bitten by another dog, that can rupture the blood vessels.

There could also be discomfort due to infections in the ear that makes the dog scratch it so violently that it ruptures blood vessels. The ruptured blood vessels then release blood between the skin and cartilage. The otohematoma separates the skin from the ear cartilage, which creates a characteristic bump or swelling on the ear flap. If it is left untreated, the otohematoma can clot and form a seroma – in which case the bump that forms attaches to the ear cartilage, resulting in a wrinkled or puckered outer ear.

The treatment of otohematoma could vary depending on how far it has progressed.

If you see a small bump on your dog’s ear that has only recently developed, treatment is usually based on:

In serious cases where the otohematoma has progressed, surgery is required. The surgeon will make an incision under general anesthesia to drain the blood from the ear and remove any attachments that have formed. It is then stitched with transfixing stitches that allow the skin and ear cartilage to remain attached.

In addition to resolving the bump, it is essential to establish a specific treatment for what triggered it. Otherwise, it is likely to reoccur and can cause problems in the future.

One possible cause for a sizable bump on your dog’s ear is a tumor. Most neoplasms (an abnormal mass of tissue that forms when cells grow and divide more than they should) located in the ear region of a dog are usually benign and do not cause a fatal threat to your dog. Some of the most recurrent types of tumors are:

Malignant tumors are not that recurrent, but can sometimes do so. The most common types of these are adenocarcinomas and mast cell tumors. Mast cell tumors usually occur in the ear flap of the dog.

Despite their origin or malignancy, these tumors must be surgically removed to prevent future complications. In case of a malignant tumor, your vet will also assess the need for treatments such as radiotherapy or chemotherapy.

Abscesses can occur in any tissue of the body where pus accumulates. It is an acute inflammatory reaction (body’s response) to bacterial infections. Abscesses in a dog’s ear can be recognized by bumps in the skin with the size of the bumps varying on how bad the infection is.

Fights with other dogs commonly cause ear abscesses in dogs. The ears are exposed to biting and the bacteria in the other dog’s mouth can infect open wounds. An abscess could also be caused by any trauma or wound with a secondary bacterial infection. These could be due to blows, accidents, or even insect bites.

Usually, the treatment of abscesses is based on:

Other Reasons For A Bump On Your Dog’s Ear

Some of the other less common reasons we might see bumps on a dog’s ear are:

There may be some more reasons for bumps on your dog’s ears and some might not be detrimental to your dog’s health. However, in any case of bumps developing on or in your dog’s ear, take them to the veterinarian as soon as possible. Cysts, lumps and inflammation in the ear could damage your dog’s ear and impair their hearing abilities, especially if they are left untreated. 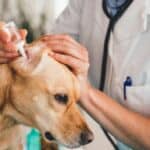 White Bumps on Dog’s Ear Flap – Should I Be Worried?

Why Some Chihuahuas Have Floppy Ears