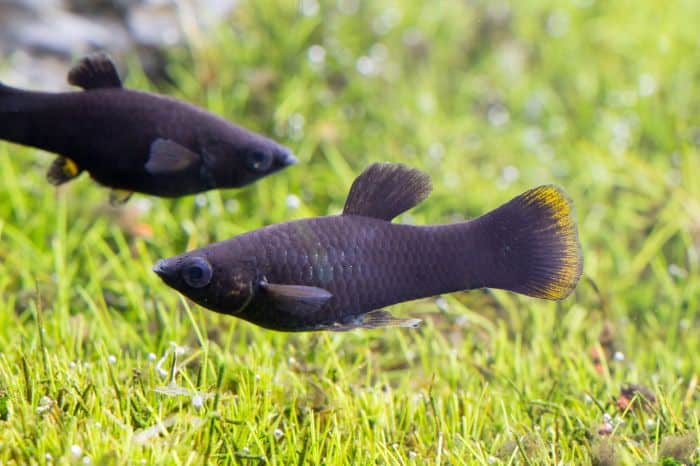 If you are crazy about fish keeping and have Mollies and Platies in your fish tank, then I can guarantee that you must be wondering whether these two can interbreed or not? But don’t worry! I’ve found the answer and its not complicated at all.

So, can Mollies and Platies Breed?

Well, the answer is no! Mollies and Platies are not compatible for breeding. For crossbreeding, the two species must be closely related to each other. As Mollies belong to the family Poecilia and Platies belong to the Xiphophorus therefore, they cannot crossbreed. However, Platies can breed with Swordtails and Mollies can breed with Guppies as they share the same families.

Crossbreeding in fish can be really fascinating as it results in the creation of something new and totally different. The hybrids of different species share the traits of both parent families and have some unique features of their own as well.

Let’s dig a little deeper in this phenomenon and clear all our doubts about the Mollies and Platies cross breeding question.

Crossbreeding is a phenomenon in which fish from two different species breed with each other and produce a hybrid. A lot of people say that you cannot find these hybrids naturally out in the wild. But there also exists a counter-argument that there is nothing like an “unnatural fish.” For example, there are over thousand different species of Cichlid that come from 1 Cichlid fish and have evolved in different types and colors over the years. This supports the argument that crossbreeding, in fact, is a natural process.

Apart from the cross-breeding disputes and arguments, the burning question is whether Mollies and Platies cross breed or not? As stated above, the main requirement for crossbreeding is that the breeding species must be closely related. This is important because if the breeding species are not compatible, the fry produced as a result may have unstable genes. This may lead to them dying quicker than you anticipated.

“Then where did those baby fish come from in my tank?”

If you are keeping Mollies and Platies together in the fish tank and are wondering where the little baby fish came from then we have an answer for that too. It may be due to the fact that your platy was impregnated before you put the two species together.

Platies and mollies are livebearers i.e. they give birth to fully grown babies instead of laying eggs. Therefore, they can store the sperms for a long period before appearing to be pregnant and giving birth. And, platies can give birth multiple times from one male several months after mating.

So, now you can be free from the thought that the little babies are the result of cross-breeding between the two totally different species.

Difference Between Mollies and Platies:

Mollies and Platies are both tropical freshwater fish and are perfect for beginners and longtime fish keepers. Both of these fish are livebearers and give birth to fully grown fry instead of laying eggs. Mollies and Platies are really colorful and active which makes them extremely popular amongst the hobbyists on all experience levels.

There are a number of physical as well as biological differences between these two species. The following description will help you point out those differences instantly so that you can take care of your pet fish accordingly.

How to Find Out Whether Your Mollies And Platies Are Male Or Female?

In case of mollies and platies, telling the difference between male and female is fairly easy.

Is it a Bad Idea to Keep Mollies and Platies Together in a Fish Tank?

Nature-wise, Mollies and Platies are not at all aggressive and you won’t have any problem in keeping them together in a fish tank. They almost have the same survival needs and require same basic care like any other tropical freshwater fish.

Also, you don’t have to be worried about overpopulation in your fish tank as these two species are incompatible and won’t crossbreed. (Although platies would more than enough compensate for that by reproducing almost every month!)

The size of the fish tank is of great importance in this case. If you have a small tank with mollies and Platies, there are chances that your Platies may be a little bit uncomfortable as mollies tend to be of bigger size.

What are the Best Fish Tank Fellows For Mollies and Platies?

Platies are non-aggressive and peaceful tropical fish and can live happily with tank mates like Mollies, Swordtails, Tetras, Gouramis, and Rainbowfish etc.

There are a number of tropical fish species that can live with mollies in the same fish tank. For example, other Mollies, Guppies, Endlers, Swordtails, Platies, and all other livebearers will get along great with them. Some of these freshwater tropical fish may crossbreed and produce hybrids. Whereas, fish like swordtails and platies can give good company to your mollies without overpopulating your fish tank.

Gourami is also a great choice for a roommate with mollies. There are a lot of different species of gourami and you will have a lot of options to make a perfect choice. However, before you choose a roommate for your mollies or Platies, you must do your research on the aggression levels for every species. If you choose a species that grows larger in size as compared to the mollies and Platies, they may show signs of aggression.

Another great choice of a tank mate for mollies are Bottom Feeders. These fish are going to be completely fine with the mollies as they don’t bother the livebearers. They usually mind their own business and their only concern is their next meal. As long as mollies continue to keep to themselves, bottom feeders are going to be completely okay with them. Problems with bottom feeders are extremely rare and they don’t show any signs of aggression.

You can also choose Betta fish to give company to your mollies. You can go for the female Bettas as they are mostly calm and non-aggressive. Female Bettas need to live in groups, otherwise, they may get lonely and die. But the bettas cost almost $4 per fish and can be an expensive roommate for mollies.

Can Platies Breed With Guppies? Just like Mollies, Guppies also belong to the genus Poecilia. Platies being a part of Xiphophorus family cannot breed with guppies due to their incompatible nature and different families.

Is It Possible To Breed Mollies With Other Fish? Mollies can easily breed with closely related species such as guppies. These two belong to the same family i.e. Poecilia. A mature molly can give live birth almost once a month. However, if you want the fry to survive till adulthood, you will have to take special care of them and keep them away from other fish in the tank who might eat them.

Can Mollies and Guppies Live Together? Mollies and Guppies are very similar species in terms of their behavior, needs, and genetics. You can easily keep mollies and guppies together in your fish tank. But you have to take the necessary steps to avoid overpopulation in your aquarium as these two species are closely related and can crossbreed without any difficulty. It is a good idea to keep male mollies and male guppies together and introduce the females in there only when you want them to breed.