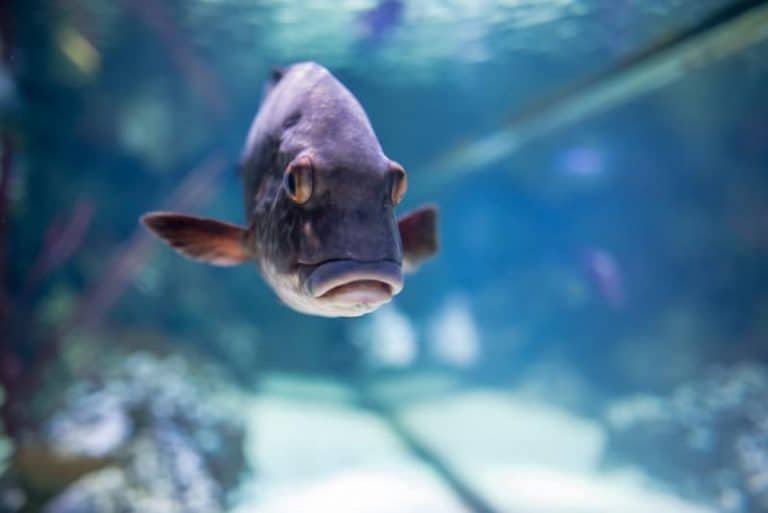 You’ve seen them swim, see, hear, smell, and more. But have you ever seen a fish cough, sneeze, or cry?

The short answer to your question is, yes, a fish coughs, but no, it doesn’t sneeze or cry. The way a fish’s biology works, it is simply not possible for them to sneeze or cry. Even when they cough, it is because of an abnormal interruption.

Are you curious to know more? Then, what are you waiting for? Read the next section.

How Does a Fish Cough?

Every now and then, a fish uses its gills to extract a little amount of oxygen you find in the water. Then, it releases gases like carbon dioxide. During this process, it is possible for particles or bacteria to get sucked in through the gills. Similar to how bacteria and particles are sucked into our mouth while we are breathing.

To clear the bacteria and particles, our body will either instinctively cough, or you could be prompted to cough on your own to clear out these particles. So, when these particles go into a fish’s gills, their ventilation cycle is interrupted with a cough. Why does this happen, and when? The answer is, their ventilation cycle is interrupted when they need to clean out their gills.

Before you ask, no, when a fish coughs, you won’t hear a sound.

Why Can a Fish Cough but not Sneeze?

Before I answer your question, it is important to understand the difference between coughing and sneezing. Coughing comes from your throat, and it is done voluntarily and involuntarily to clear the air channel. On the flip side, sneezing is an involuntary action where your air is expelled at great pressure as a reaction to some irritation near the nostrils.

It is important to note that when you sneeze, air from the lungs is expelled at great pressure. The keyword here is air. Since a fish lives underwater, it doesn’t really have any lungs. Sure, there is a bit of air that a fish sucks in, but no lungs. If it had lungs, you’d find the majority of fishes floating.

So, to answer your question, a fish doesn’t sneeze because it simply doesn’t have the biological components required to sneeze.

You and I might cry due to our emotions, but our fellow animals might tear up for some different reasons. Scientists presume that animals only cry when there is some irritation near the eye. I won’t get into the details, but let’s just say animals try not to cry out of emotions because it is good for their survival. They wouldn’t want to appear weak in front of a threat.

However, marine life is vastly different from the creatures you find on land. Do fishes cry? No, they do not cry because they simply can’t produce tears while living underwater. Also, a fish doesn’t have the cerebral cortex and the limbic system, which are the part of most mammal’s brain that deals with emotions.

To be clear, this is just a general observation. A fish actually has a limbic system. But, no, it still doesn’t cry because it simply can not produce tears underwater. It doesn’t have the biological systems to produce them.

Animals normally don’t cry because they are sad or happy, and a fish doesn’t cry at all. So, the question is, do either of them feel pain? Does a fish feel pain? It is a reasonable question, and the answer is yes. Of course, animals and fish alike feel emotions – agony, joy, anger, and more.

A New York Times article talked about a research that proves; a fish also goes through depression. It shows the same symptoms of depression, i.e., isolating itself from other fishes. It is theorized that how fish feel is probably different from the way you and I feel.

The only reason why it doesn’t cry about is that for fish, it is biologically impossible.

How Does A Fish Express Pain?

Like you and I, fish probably don’t sulk in front of Netflix eating a tub of chocolate ice cream. So, how does a fish express its pain? How does it communicate that to us? For instance, if it was a cat or a dog, you can easily tell their moods. A happy dog would jump around and nudge you to play, or whimper when it doesn’t feel like going for a walk.

According to research, when a fish is happy, you would find it swimming around the tank and near the surface. Alternatively, when it’s feeling mopey, you’d find it lurking around the bottom of the tank. In addition, when a fish feels depressed, it acts similarly to the way we do. There is evidence that the way they act depends on their past experiences. A fish with a good emotional track record will be more optimistic than its counterpart with a history of bad experiences.

If you own a fish, make sure it’s happy. How can you make your fish happy? You could avoid the things that could make it sad. For instance, get a bigger aquarium if you can afford one. Imagine what it must be like for the fish to go from swimming through endless water to a few inches of the same thing. A fish also needs to be fed properly. Starving a fish could leave them depressed, dissatisfied, and with some medical problems.

What A Fish Can And Can’t Do?

Does a fish cough, sneeze, or cry? Now that we know the answers to these questions – I began to think about other functions and if a fish can or can’t do.

The majority of mammals pass gas; it is a natural process to release gas. But the question arises, does a fish fart? You might’ve noticed a little bubble in the fish tank and wondered if that was your fish farting. Sorry to disappoint, but the answer is no. A fish doesn’t fart, but they do release air now and then to maintain buoyancy.

Does a fish itch? Yes, a fish does get itchy – kind of. The gist of it is that a fish scratches that itch by rubbing itself against the rocks or any other surface it can find.

To sum it all up, I hope you finally got the answer to your questions and more. A fish can cough, but it can’t sneeze or cry. I bet if it were biologically possible, a fish would already do it to express their emotions.

Remember, just because it can’t cry, this doesn’t mean a fish doesn’t experience the same emotions. Heck, if a dolphin or whale is sad, you can hear them. It is more agonizing than a dog’s whimper and a cat meowing.

To reiterate, a fish coughs because it is vital for them to clear the bacteria that sneaks in through the gills. However, it can’t sneeze because a fish doesn’t have the biological systems to sneeze. Fishes are complicated beings, and they deserve more credit for their intelligence.

Do fish ever cry?

The emotions of any animal, fish, or human, depends on the brain. For crying in specific, the cerebral cortex and limbic system are responsible for controlling our emotions. However, our little friends from underwater are incapable of crying. They just don’t have the biological systems – such as the cerebral cortex and limbic system. Also, since a fish already live in water, they are incapable of producing watery mediums, in simpler words, tears.

Is there a fish that cries like a baby?

Well, seeing that a fish just doesn’t have the things that make us cry, it is impossible to see on cry like a baby. Howeveerrrrr, there is one fish we know that can emulate a crying baby. Who? The toadfish. It tends to make the same noise like a crying baby. Note, it isn’t crying here. No, the toadfish is just known to make noises similar to a crying baby. Mother Nature can be magnificent… and odd.

How do fish cough?

A fish does indeed cough, just not the way you think it coughs. A fish doesn’t cough because it is allergic to some coral reef. No, a fish only coughs when their ventilation cycle is interrupted for some reason. The only time this occurs is when a fish has to cleanse its gills. So, if you see a fish coughing relentlessly like a kid with flu during winters, it’s because of their mechanical and chemical stimulation.