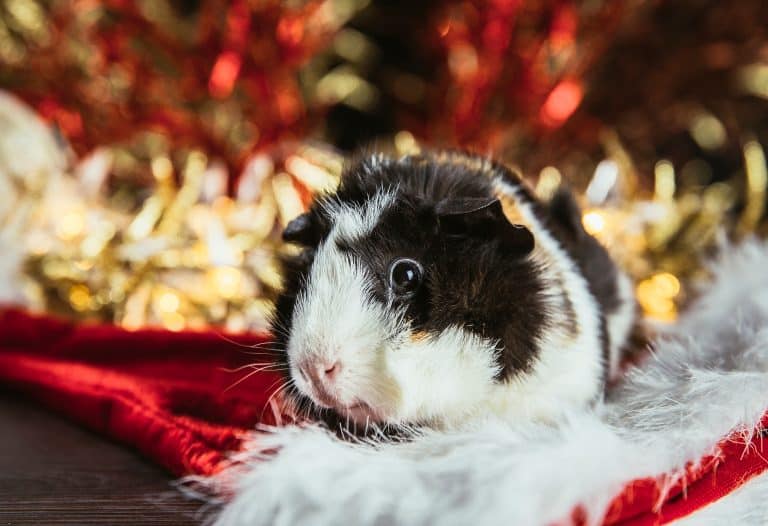 If you’ve ever researched about rodents, you would know that they have poor vision.

This is one of the most commonly known facts about rodents.

Some animals have a hard time seeing in the dark while others are shortsighted.

Similarly, some are color blind and can only see the world in black and white!

So, do guinea pigs see in color? Can they see in the dark? Although guinea pigs belong to the same group of animals, they have much better senses than the rest. Guinea pigs don’t only have better vision, but they also have better hearing and touching abilities. They can see colors very accurately. As for visibility in the dark, it is speculated that they can see better than humans.

Due to this name, they are usually referred to as cavies.

As a matter of fact:

Cavies are said to have better vision than cats!

Since these little animals are at a higher risk of being attacked in the wild, they have been blessed with a special facial structure and vision.

Guinea Pigs are said to have a 340-degree vision which is actually mind-blowing!

This means it is almost impossible for you to ever surprise your guinea pig because it can see you even if it’s facing the opposite way.

Guinea pigs even sleep with their eyes open.

You can even let your guinea pig roam freely in the house if you take proper precautionary measures. I explain how to do that in my article on letting guinea pigs roam free.

One thing is for sure, these animals have really been born with excellent safety qualities that will keep them as safe from predators as possible.

Guinea pigs do have superior eyesight than most rodents but, it still isn’t that great.

A common question that I get asked is, “can guinea pigs see color?”

They can differentiate between different colors and identify them too.

But, they cannot see the colors 100% authentically.

Studies have proven that guinea pigs are highly sensitive to the color green.

Some also say that they are sensitive to the color red.

They can see all the colors.

Some very well but others, they cannot see as well as humans do.

There is a slight degree of color blindness in them, but it’s so minute that it doesn’t really matter.

Can guinea pigs see in the dark?

A guinea pig’s vision during the night is somewhat limited.

They can definitely see but, it just isn’t as well as during the day.

Studies still haven’t 100% concluded whether guinea pigs can see well during the night or not.

One thing that is known for certain is that guinea pigs do use their whiskers and sense of smell to enhance their sight.

Without the combination of these three senses, they won’t be able to survive in the wild.

However, as we know that guinea pigs are said to have better vision in the dark than humans, these animals are just fine as pets.

Let’s talk about the degree of visibility in guinea pigs.

It is clear that their eyesight isn’t perfect, but at the same time, we also know that is better than a lot of other animals.

First, let’s see how far these animals can see.

They cannot see further than 3 to 5 feet.

But can guinea pigs see you when you’re standing right in front? Sure, they can!

This isn’t known for certain but, this range does depend on the health of the animal.

A healthier guinea pig will definitely be able to see better.

They cannot see directly under their nose or mouth either.

This is due to the placement of their eyes on their heads.

That is definitely compensated for in their 340-degree horizontal vision.

But, this does mean that guinea pigs cannot see the food or water they’re consuming.

In that case, they can only use their sense of smell and touch to identify what they are eating.

They have very limited focus.

What this means is that if they are looking at one object, they won’t be able to see anything else that is in the background or around the main subject.

Such limitations are compensated with other qualities such as their ability to see 33 images per second whereas humans can only see 22!

Guinea pigs can also very quickly estimate how big an opening is.

This is why you’ll almost never spot a guinea pig stuck in a hole because all their moves are fully calculated.

They are also blessed with an excellent memory.

According to research, guinea pigs use memory more than sight.

For example, if they walked on a path once, the next time they’ll use their memory to walk the path again.

Their memory is stronger and hence, helps them survive despite their limited eyesight.

All these facts are mostly based on scientific speculations.

Only a few have been verified through experimentation.

Eye infections to look out for in Guinea Pigs

Sometimes, the vision of a guinea pig can be worsened due to eye infections.

Unfortunately, eye infections and other sight-related issues are very common in these animals.

Here are a few symptoms to always look out for:

It is basically conjunctivitis of the eye which causes inflammation of the outermost layer of the eye.

Pus discharge is the most noticeable symptom in this condition.

Just because it is common doesn’t mean it isn’t something serious.

Visit a veterinarian immediately before the infection starts causing permanent damage to the eye.

You should also look out for corneal ulcers.

It can start from a tiny scratch around the eye and worsen within days.

A corneal ulcer can keep your guinea pig from other everyday activities too.

The severe pain makes the animal give up eating as well.

Your vet will prescribe ointment drops at first.

But if they don’t work, you may have to go through with grid keratotomy which is a procedure that is done under anesthesia.

As I mentioned before, a healthier guinea pig has better vision.

If you want to maximize your guinea pig’s sight, you must boost its diet.

Vitamins are the most essential nutrients that boost eyesight.

Other than their regular meals, you can add in a few treats or extra portions from the following suggestions to help improve their sight gradually.

These foods are high in nutrients that improve the vision of guinea pigs.

If you’re afraid that adding these extra foods might make your guinea pig overweight, you can adjust the overall calories.

Reduce the portions of the meals to accommodate these eyesight boosting foods while maintaining the daily calorie intake.

Here’s another important thing to know:

You could be offering the best food options, perfect meal sizes, and what not!

Yet, your guinea pig could still be unhealthy.

There are two reasons for this:

Other than that, ensure that whatever the animal is consuming, it is digested too.

For this, arrange physical activities.

You can take the guinea pig out for a walk or simply provide activity toys within the cage.

This should be at an optimum temperature.

Make sure the water isn’t frozen during winter time.

Do guinea pigs like to sleep in the dark?

Guinea pigs do not sleep for long periods of time like other pets.

Similarly, they don’t really have any preferences as per the environment they sleep in.

However, as a guinea pig, it is important to train them to sleep throughout the night.

By providing a dark and quiet area, you can encourage the guinea pigs to stay asleep for longer.

Also, try to keep them as active as possible during the say so that their tired body keeps them asleep at night.

The brighter you keep their environment during the daytime, the more effective the darkness in the night time will be.

If you have ever seen a guinea pig you would’ve noticed that its eyes are on the sides of its head.

The placement of the eyes isn’t very centralized.

Their eyeballs also contribute to giving them somewhat of a cross-eyed look.

It is also true that due to this, guinea pigs cannot see straight ahead.

Are guinea pigs loud at night?

However, that isn’t much of an issue since these animals don’t have a very loud sound.

But, if the guinea pigs are more in number and their cage is placed somewhere near your bed, their squeaky sounds will definitely keep you awake at night. 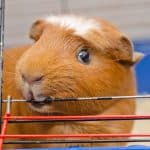 13 Ways to Get Your Guinea Pig to Stop Biting You 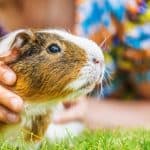 Do You Need to Get More than One Guinea Pig? 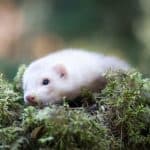 Should I Get a Ferret or a Guinea Pig?