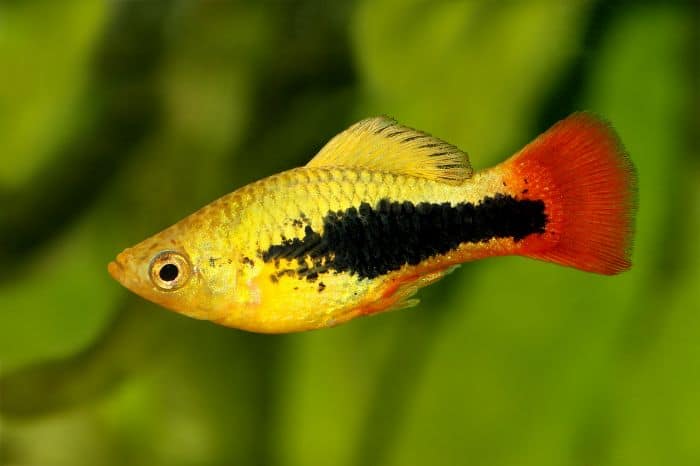 I recently upgraded my aquarium size, allowing it to adjust an extra number of platies. This led me to become quite interested in mating my platy fish.

So, how do platy fish mate? Interestingly, you don’t need to make any special arrangements for their mating. Platies breed through spawning when both genders are kept together under normal tank conditions.

Before getting into the details of the mating process, you need to figure out the gender of your platy. This will provide you control over their breeding.

The male platy is quite energetic and could be found teasing the female platy.

Once you are able to identify the gender, you can keep the female fish separate from the male ones in case you do not want them to breed. Otherwise, you can keep both genders together in the same tank which will result in swift breeding of the platies.

The mating of platy

Platy is a live-bearing fish that breeds frequently. Platy fish breed really fast which means your tank can be filled with a large number of fry in a very short time when you allow them to mate. As mentioned earlier, you can prevent the unwanted reproduction by keeping the male platy and female platy in separate tanks.

However, when you want them to mate, all you have to do is to put the male and female fish together. Platies breed promptly when they are given enough cover or moderate condition in their tank to feel safe.

When your platy attains 4 months of age, it matures enough to reporduce fry. Keep the tank temperature to 64°F initially and then rewarm it slowly to 70°F. It will recreate the natural breeding season which they are aware of in the wild and they will get ready to mate instantly.

Shortly after spawning, the fish abdomen increases in size and attains an angular shape. A gravid spot starts developing in the center. The gravid spot gets larger as the offspring increase in size. It takes almost 28 days to give birth to a fully-grown fry.

The platies are noted for having no maternal instincts as they can eat their own fry. So, if you want all the newly born fry to survive, then you should separate them from the adults. Keeping the adults and fry together in the same tank is not secure.

The fry grow up real quick, in just 1-2 weeks the body enlarges and they are usually able to survive with adult platy fish, although they are still under danger of being eaten by them.

If you install a variety of aquatic plants and vegetation inside your tank, then it would be very helpful for the fry to survive. They can hide inside the plant leaves when the adult platy tries to hunt them.

Usually, baby platy fish are fed the same diet as the adults, but you can keep some special care for them in this regard. You can get liquid fry food from any pet store that is dissolvable in the water. Otherwise, you can grind egg yolk or normal fish food into powder form and feed it to the fry.

The behavior of mating platies

Male platy is usually aggressive as per its sexual desire while female platy stays calm. This is why it is suggested that females outnumber males in the tank. It helps in keeping the pressure off on female fish which sometimes become a victim of male’s sexual aggression. If you want to keep platy fish, then you are recommended to restrict the ratio of male and female platy to 1:3.

After mating, move the male platy into another tank as they have an extremely powerful reproductive drive that compels them to get aggressive towards female fish even after they have spawned. You cannot move females into separate tanks as it can cause them stress which will lead them to abort spontaneously. Also, the pregnant fish requires a very clean tank to feel fresh. Apart from that, the usual behavior of fish doesn’t change during pregnancy.

Platies mate under normal tank conditions. But keep in mind that if you intend to provide a good life to your platy, then the tank size should be bigger. Platies cannot live happily inside a small tank. Under the poor tank conditions, the lifespan of platy is decreased and their breeding is also affected. A 5-gallon tank is ideal for a single pair of platy and a 10 gallon tank can accommodate 3-4 platies. Increase the tank size to keep more fish in them.

When you are thinking to mate your platies, then get ready to provide them with either a bigger tank or a separate tank.

The ideal tank temperature is 72°F- 78°F. The pH of tank water should be between 7.0-8.3. For regular tank cleaning, install a filter inside the tank but do not forget to cover the fan with sponges otherwise the fry can get stuck inside them.

How does a platy fish deliver its fry? When a pregnant platy is ready to give birth after almost 28 days of gestation, it will swim to a clean and quiet part of the aquarium where she gives birth to fry all alone. The fry are able to swim and eat on their own. The only threat to healthy baby platies are the adult fish which will eat them without any guilt.

How can I keep fry and adult platies in the same tank? Although it is a risk to keep them together, but if you have no other option, then you can buy a breeding trap and install it inside the tank. Once the offspring are born, you can keep the adult platies inside the breeding trap which is usually a box with small holes. These little holes do not allow for the adults to leave the breeding trap. The baby platies, on the other hand, will be able to enter or leave as they please. This keeps the adults confined inside the tank while the baby platies roam around freely.

Can I keep pregnant platy with other fish breeds? Platy get along with guppies and mollies very well. But during pregnancy, it is better to keep the platy separate from male fish of any breed as they can be aggressive and create tension inside the tank. The mental state of your female platy fish goes a long way in the birth of healthy fry.