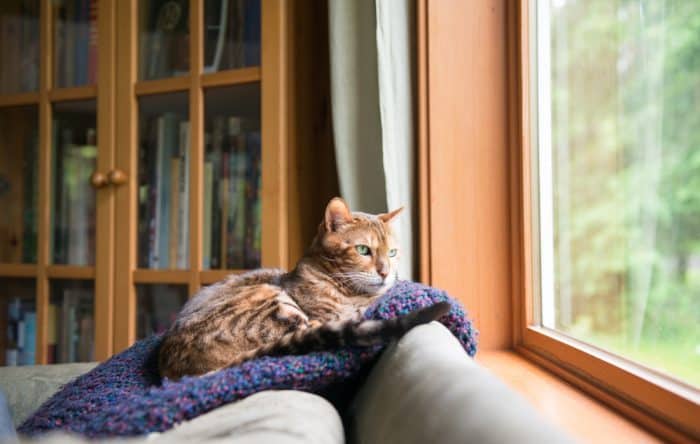 I was astounded to learn that Bengal cats are illegal in many states.

Who can stop me from having a pet of my choice? The law!

So I hurried to find out which states a Bengal cat was banned in.

Let me share the information with you so you can make sure that you are not on the wrong side of the law.

So which states are Bengal cats illegal in? Quite a few states ban Bengal cats altogether while others have some stringent restrictions. The states where Bengals are illegal include New York, Georgia, Iowa, Alaska, Hawaii, Delaware, Connecticut, Indiana, Seattle, and Denver, Colorado.

Sure, Bengals are a handful; sometimes even dangerous.

However, I could not have dreamt that they could be illegal in some states.

Many might not even have realized that the cat they are thinking of adopting can land them in legal trouble.

Thus, finding out about the legal status of Bengals in your state is crucial. 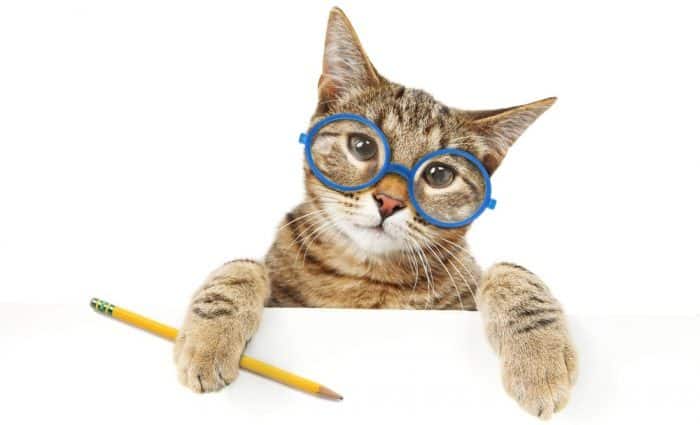 Let us take a look at the regulations laid out by different states with regards to keeping Bengal as a pet.

All generations of Bengals are banned in New York City.

The regulation was imposed strictly after an incident of a person keeping a tiger as a pet in his apartment.

Some years ago, a small opportunity was available for the owner of Bengals.

They had the option of getting a permit for their cat.

However, now that option has also been closed.

You cannot own a Bengal cat under any circumstances in the state of New York.

According to the law of Georgia, the hybrids of all non-domestic breeds are banned.

You cannot even get a permit.

You will have to prove that the Bengal belongs to a lower generation that is beyond F5 or F6 to even be considered for a permit.

Regulation of first and second generation of Bengals is made in the state of Massachusetts.

Bengal owners have to register their cats with proof of their ancestral history.

Verification is required that they do not have any wild parentage for at least three generations.

Strict rules and regulations were laid out by the state of Iowa in the year 2007.

You have to go through quite a long process to get a permit to keep a Bengal cat in Iowa.

The state bans Bengals unless they are by F4 or above.

A proper license and permit is required to keep any generation of the cat wherein proof of their ancestry has to be provided.

Why are Bengal cats illegal in Hawaii?

Well, we’re not sure.

But the fact remains that all types of Bengals are illegal in the state of Hawaii regardless of which filial stage they belong to.

This state placed a ban on hybrid breeds including Bengals in 2010.

A special license is required to keep an exotic animal; the process is tedious and complicated.

Bengals are banned in this state.

Violation results in liability to pay a fine which does not go beyond $1000.

Every generation of Bengal is banned within the state.

Bengals from early generations are banned in the state.

The cat needs to be separated from its wild ancestry for at least five generations.

While the Bengal cat is not outrightly banned in the state, the F1 and F2 generations are strictly regulated.

The law of California prohibits declawing the Bengals unless it is necessary for their health.

The state of Indiana regulates exotic cats and requires a permit for an F1 generation Bengal cat.

Bengals and their legal status

Bengals are not meant for everyone; they can be quite a tricky pet.

Perhaps it is their wild ancestry which is to be blamed for their ban across various states.

Bengal cat is a hybrid of the wild Asian Leopard cat and a domestic cat.

Thus, while some generations of these cats are considered domestic, others are deemed exotic.

Some states ban the exotic generations while allowing to keep the domestic ones as pets.

This is because the exotic generation is closely linked to the wild ancestors; they can be potentially dangerous.

Bengals have distinguished markings on their coat which gives them a striking appearance.

These markings can be spotted, marbled or in the form of rosettes.

You will find markings all over their body including their face and tail.

While the spots are either black or brown, the coat can be of various colors including:

These majestic cats manage to stand out owing to their build.

Being medium-sized, these furballs have a muscular body with long back legs.

Their heads have a wild look to them while their overall appearance provides evidence for their wild ancestry.

Bengals, albeit their somewhat alarming appearance, can be quite friendly and loyal pets.

However, sometimes, their wild side becomes apparent, making them impossible to handle.

When Asian Leopard Cats are bred with a domestic cat, the generation of Bengals produced is called F1; F1 stands for Filial which literally means offspring.

When F1 Bengals are bred with other domestic cats, the second generation or F2 is produced.

The cycle continues with the breeding of the next generation with a breed of the domestic cat.

It is F1, F2, F3 and F4 generations which are considered exotic owing to their close relationship with the Asian Leopard Cats.

Lawmakers express concern about the wild instinct of these cats which can endanger people.

Thus, a ban is inflicted.

From F5 generation onwards, the breed is considered domestic thereby making them legal in various states. 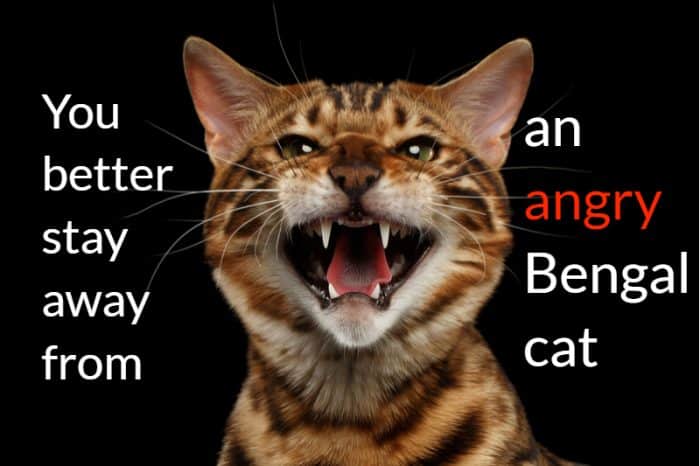 There is something about these furballs that manages to captivate you.

You feel like picking them up the moment you set your eyes on them.

However, this is probably a bad idea.

The thing about Bengals is that they are highly strong-willed and dominant.

They expect to be treated according to their mood.

If you approach them when they are angry, you might regret it.

They want attention and are willing to go to great lengths to get it.

When left alone to fend for themselves, they get upset and let their disappointment be known.

Bengals, when angry, can be quite an alarming sight.

Their pupils dilate; it appears as though their yellow-colored eyes have changed colors.

Their ears are pushed backward, such that they are not visible from the front.

They start to flicker and flash their tails, thumping it loudly on the ground.

This should be sufficient to tell you that the Bengal is better left alone at this point.

Handling these furballs in this mood is impossible.

They are not exactly open to cuddling or any attempts of cooling them down.

This is why Bengals are not at all considered suitable for households with toddlers.

Newborns and toddlers cannot be expected to understand the mood of these cats.

They might do something which angers these cats, causing them to harm the babies.

How should Bengal cats be treated?

Bengals can be quite a demanding pet.

They want your complete attention at all times.

They expect you to interact with them and think of new ways to entertain them.

When you leave them alone at home, they detest solitude.

As a result, they create a ruckus in your absence to make you pay.

The best way to treat Bengals is to give them what they want while training them to adapt to the surrounding.

Give them ample space to play around and things to climb on. In our Bengal cat checklist, we recommend our top 20 products for every Bengal cat owner. If you own one, you should certainly check it out.

Get interesting puzzle games for them that keep these intelligent cats busy.

It would be a good idea to get them some company in the form of another pet.

These cats get along quite well with dogs.

Try to understand the mood of your Bengal and handle them accordingly.

If they seem angry, leave them on their own to cool down.

If you think that they are upset with any of your gestures, avoid doing that again.

Do not admonish them. The only way to control a Bengal is through gentle care and patience.

Are Bengal cats rare? If you want to get a Bengal cat, you will need to contact an official Bengal cat breeder. It is rare for pet stores and rescues to have this breed. They are quite expensive as well. A Bengal kitten can cost anywhere between $400 and $10,000.

Are Bengal cats good house pets? Yes, if they get the right owners. The thing about Bengal cats is that they need gentle care and attention. Those that manage to get through to these cats find them to be highly loyal and entertaining companions. Bengal cats also adapt to their new family quickly. Getting along with children and other pets is also not a problem with these cats. Thus, if they are handled rightly, Bengals prove to be excellent pets.

Do Bengal cats get lonely? Yes. Bengals are highly intelligent. Thus, they like to be challenged with new stuff. These cats tend to get bored quite quickly and boredom paves the way for depression. Thus, they get lonely when they have nothing to keep them occupied. You need to make sure they get company or have something to keep them engaged in your absence.

2 thoughts on “What States are Bengal Cats Illegal In?”