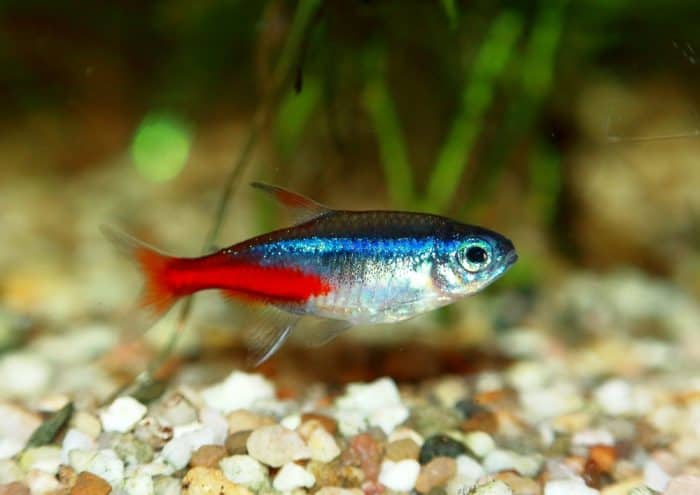 One of the top internet searches on neon tetras is the question whether it is normal for them to fight each other.

So, why are your neon tetras fighting? One of these reasons could be their manner of swimming which makes it seem as if they are fighting. However, sometimes, fighting among neon tetras is an act of aggression.

So, without further ado, let’s explicitly discuss this typical question which so many owners are trying to find an answer for.

Contents show
Neon Tetra male fighting for the female’s attention (Video)
Neon tetra’s swimming manner
Fin nipping
The difference between fighting and playing
Are they fighting or mating?
What if you are sure that your neon tetras are fighting and not just playing?
What happens to a neon tetra that is attacked and bullied?
Related questions

One of the possibilities of neon tetras’ fighting among each other is their swimming manner. Neon tetras, as we mentioned before, love swimming in schools. They have their own swimming pattern but how do you expect a school of fish to swim together without fighting with each other at least once?

Imagine yourself stuck in a crowded place and walking among dozens of people, wouldn’t you feel irritated at some point and maybe you would lose your temper? Neon tetras could also relate.

This is exactly why it is absolutely vital that you never overstock your aquarium with neon tetras and make sure that you have no more than 7-8 neon tetras in a 10-gallon tank.

Moreover, there are some very active neon tetras and these could be the ones causing all the trouble. You need to keep your eyes on your neon tetras’ behavior; because if it remains bizarre for more than 24 hours, you need to consult a professional.

A sudden change in the tetras’ behavior is an indicator of disease or stress.  When neon tetras change their swimming patterns out of the blue, make sure you monitor the water parameters because there might be something irritating and stressing them to attack each other.

If your neon tetra is not exploring around the tank, you need to be alert because it might be sick or feeling threatened by something. Try feeding the neon tetras and see if their swimming pattern returns to normal; If not, you should be worried.

Neon tetras are fin nippers. Most fish can nip at other’s fins under stress. This is a normal instinctual behavior that you do not need to worry about unless it reaches a certain extreme.

Neon tetras chase each other or other fish most of the time without the intent of attacking or showing aggression. They are very playful creatures and can be quite a handful for beginners. Sometimes, people think that fin nipping means that the fish are fighting and attacking each other. Thus, owners start to become worried and look for explanations.

Here are some possibilities:

The difference between fighting and playing

Sometimes you will notice that your neon tetras are continuously chasing each other. You might start to be anxious and concerned over this matter.

But what if they were just playing? Neon tetras are known as tricky and playful creatures. Sometimes, they jump out of the tank as well.

Neon tetras usually chase each other and this is nothing serious at all. But be careful, if your tank is too small to contain 10 neon tetras, it is expected that they would be fighting and not “playing” because they would not have enough room to swim freely and practice their swimming manners in groups.

It is a typical behavior of the tetras to be playing together by fin nipping as well. There is no need to be worried by this as it is this fish’s natural instinct which can not be curbed to a great extent.

What you can do, on the other hand, is to provide your neon tetras with a big enough tank that would give them space to swim freely.

Are they fighting or mating?

This is also another important question! Maybe the neon tetras are just performing their natural and normal mating manners but you misunderstand and perceive them as fighting. How do we know the difference?

During the mating season, male neon tetras will be fighting each other in order to chase a female.  If you really want to make sure that your neon tetras are mating and not fighting, separate a male and a female neon tetra in a separate tank which has the convenient conditions for their mating and spawning.

If you see the male acting oddly and swimming in a square pattern, this means that mating is about to begin and that the male will fertilize the eggs very soon.

So yes, neon tetras could be mating and not fighting among each other. You just have to make sure that the tank’s conditions are unchanged and the size is good.

What if you are sure that your neon tetras are fighting and not just playing?

Furthermore, fighting could be an expression of aggression. Neon tetras detect the slightest change in their habitat’s conditions. Therefore, any change would affect their behavior. Some of them refuse to eat and get stressed whereas others become aggressive and they start attacking each other.

This is very dangerous because it could lead to the fish’s death. Check the water parameters on regular basis as well as the temperature to prevent the occurrence of sudden changes. The ammonia levels in water could be the reason why the neon tetras are going crazy, so watch out for those!

What happens to a neon tetra that is attacked and bullied?

You will notice that there is something wrong with the neon tetra that is not acting normal. A bullied neon tetra will start losing its color eventually. It would also no longer swim with its school.

If the situation is really critical, you might notice the neon tetra showing some signs of ailment and approaching death. It would no longer be shiny and the fish could be struggling to swim.

Disease is also another possibility why neon tetras might seem to be fighting with each other. In other words, stress would be the main factor that leads to the fighting between the neon tetras.

Could neon tetras eat other fish? Neon tetras could be eaten by larger fish; however, neon tetras themselves only eat very small pieces of brine shrimp, blood worm, daphnia, and tubifex.

Why are my neon tetras disappearing? They are not disappearing, they just change their colors to become transparent. It could indicate that they feel uncomfortable, unsafe, threatened, and sick or irritated with bright light. Their colors would fade, making you think that they dissolved in the water and disappeared.