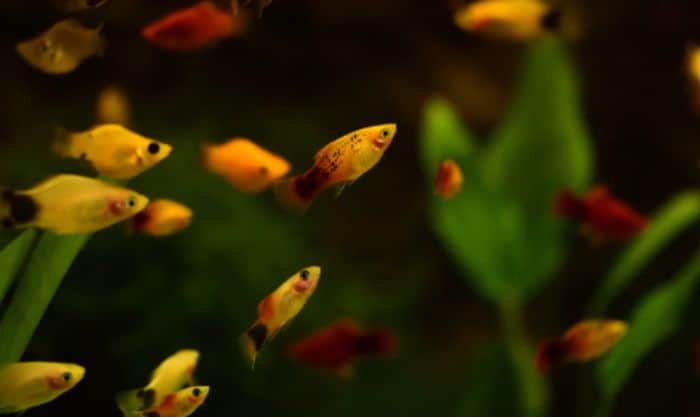 It is both – confusing and frustrating to find your platy fish fighting with each other. However, if you search for ‘platy behavior’, you will find they are prone to show aggressive behavior on unique occasions only.

But, why are my platies fighting? Bullying amongst platies occurs due to many reasons. For males, in particular, seeking the attention of female platies is the number one cause of disputes.

So, how do you maintain peace between the tank mates and prevent the fish from killing each other? In this guide, let’s discuss the solution to a problem faced by many platy owners.

The most effective solution: outnumbering the male platies

If you find one fish to be pecking the other, there is a chance that they may be breeding. Platy fish are easy to breed and don’t require much encouragement from the aquarists. Simply introduce a female and male fish to the tank and you’ll find them breeding in no time.

However, if the male platies are pecking and fighting with each other – chances are that they might be doing so for the attention of their female counterparts.

A great practice to limit ‘jealousy’ between male platy fish is to outnumber the males with females using a ratio of 1 to 3. This simply means having two male platies for six females, three male platies for nine females, and so on.

Keeping limited number of platies inside the tank will not only eliminate the occurrence of fights but also prevent the male fish from excessive mating with the females.

Getting ‘too much attention’ from the male platies also exhausts the females and can even convert into a life-threatening condition. This is why a lot of aquarists separate the male and female platies in different fish tanks if they are not interested in breeding them altogether.

But this causes issues when the male tank starts showing aggression with the fish ultimately fighting with each other. That is why it is a smart option to buy only female platy fish if you do not want to mate them.

How to determine the gender of platy?

Unlike other fish that lay eggs, platies give birth to live baby fish. This means that the fry are able to swim and eat from the very minute that they are born. However, adult platies have no maternal instincts and it is very common for the platies (even the parents) to eat the newborn fish. Thus, if you want the young ones to survive, ensure that you separate the lot from the community tank as soon as they are born.

Other ways to prevent the adult fish from bullying the fry is to:

At times, the mother platy undergoes much stress when it is isolated from the others during pregnancy or is placed in another tank. You would want to keep an eye on how she reacts to the change. If she feels stressed out, then it’s best to place her back in her usual tank as stress might lead to premature birth or abortion.

Another common reason for aggression between tank mates is the inadequate living or water conditions. Besides changing 25% of the water every week, it is essential to conduct a water test for ammonia and nitrite levels, oxygen, improper temperature, and pH levels.

Ideally, the water for the platy’s tank should be of medium hardness with acidity within pH 6.8 – 8.0. Water temperature should also not exceed 77 F (25 degrees Celsius).

Can the platies fight for food?

The platies also chase each other in competition for resources if you have an overcrowded tank and are adding fewer amounts of food than required.

Generally, platies are considered omnivorous and thrive when given adequate amounts of fish flakes. However, they have substantial need for protein foods as well and enjoy eating insects, tubifex worms, small crustaceans, brine shrimp, as well as plant matter.

Although, platies are very small fish – they are very active and enjoy being in groups. However, they are not schooling fish although they do like staying in smaller groups of at least 3 or 4. As a general rule, it is safe to keep 1 platy for every 2 gallons of water in your tank.

Despite the occasional mishaps, platies are generally peaceful and a calm type of fish. They are active but in no means can they be characterized as aggressive pets. Fights do occur between tank mates due to lack of resources or unavailability of the opposite sex but risks of injury are not very high.

In fact, platies do well in community tanks with other small fish and close relatives. Fish like guppies, mollies, and some types of tetras make great tank mates for platies.

How to spot signs of discomfort in platy fish?

Fish are masters at masking their illnesses and as a responsible aquarist, it is essential that you spend some time every day observing your platies for their eating habits, physical activity, and association with their tank mates.

Once you spend time with your pets, you will immediately notice the signs of distress or illness, if any.

Some functions and behaviors to monitor include:

The best way to ensure you have a healthy community of fish is to spend time working on and with your fish. Identifying small changes in their behavior can minimize the stress in your platies and reduce the occurrence of fights.

Can platy fish exhibit signs of aggressiveness when sick? Yes, if your platy fish is not feeling well and suffering from some type of disease, they may stress and fight with their tank mates. Besides the quarrel, keeping a sick fish with the healthy ones is not recommended and we urge you to remove the ill platy from the tank as soon as they are diagnosed.

How to stop platies from mating with each other? Keeping them in separate tanks or using separators will prevent the platy fish from breeding. Although, if you do not wish to mate your platies, then you’re better off buying only the females as the males get aggressive when kept without their female counterparts.

How soon can you add the fry with the adult fish?  Young fish should be large enough to be left alone by adult platies in about two weeks after their birth. However, bigger fish can still go after them and it’s best to consider the environment of your tank before putting the fry in the community tank. 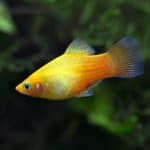 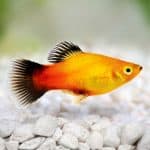 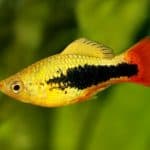