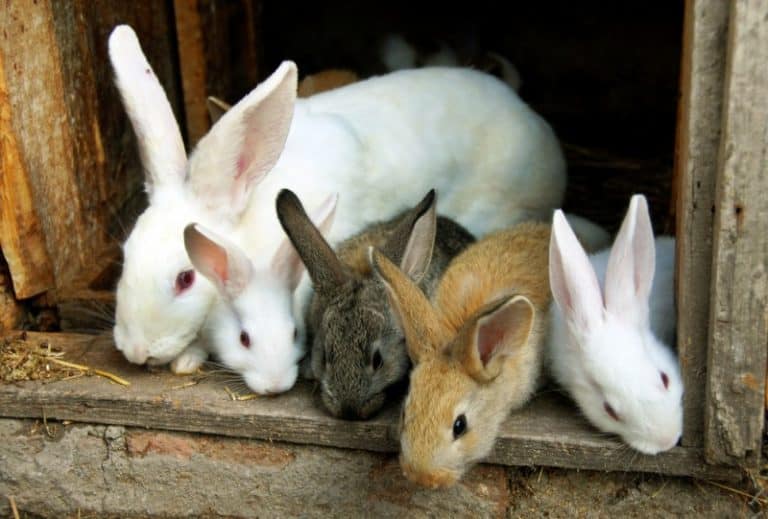 If you have a rabbit that just gave birth to a litter of kits, you probably have received dozens of adoption requests.

However, most owners become confused about the right time to separate the kits from their mother.

But why shouldn’t you separate the babies before six weeks? And how do you care for them after separation?

When should you separate baby rabbits from their mother?

According to experts, the best time to separate baby rabbits (also called a kit) from their mother is when they’re 6 to 8 weeks old. At the 6th week mark, most kits can survive by themselves and feed on adult food.

But what does weaning mean? Do baby rabbits still need care after separation? And why shouldn’t you separate the babies from their mothers before six weeks?

Let’s answer these questions below:

Before we get into detail, let’s understand what weaning means. Weaning is a process that involves introducing the baby rabbits to an adult diet while reducing their dependency on their mother’s milk.

Weaning starts right after their birth for rabbits and continues even after being separated from their mother. However, the 6th to 8th-week mark is ideal for completely withdrawing milk from a baby rabbit’s diet as they have developed enough gut flora to digest adult food.

But before we learn how to separate the kits, let’s find out what goes down between these 6-8 weeks of weaning:

At birth, the kits will be no bigger than your pinky finger. They’re at the highest risk of dying either due to weakness or malnutrition during the first few days. The mother will be feeding the kits twice a day, most probably at dawn and dusk.

After two weeks, the kits will have grown quite a bit of fur and will have open eyes and ears. While they’ll still mostly survive on milk, they will also begin nibbling on hay and pellets.

At this stage, you’ll find the kits hopping around quite frequently. Along with milk, they will also be consuming hay pellets during this time. Since they’re transitioning to solid food, it’s best to keep an out for any signs of diarrhea.

During the 5th and 6th weeks, the kits will start drinking water from their mother’s bowl. This period is also a great time to remove their nest box to prevent eye infections. The 6th week is the last stage of weaning, where the kits will be obtaining their final share of gut flora.

How to separate a baby rabbit from its mother

Separating baby rabbits from their mother is a very delicate process. During this time, the kits will likely go through a lot of stress which could cost them their life.

Once the kits have reached 6-8 weeks of age, you need to take a few measures to make the separation process as smooth as possible. But first, you need to be aware of a few signs that will help you identify whether the kits are ready to be separated or not:

Identifying if your kits are ready for separation

Inspect the overall appearance of each kit. They should have developed quite a lot of fur when they’re six weeks old. Their ears, eyes, and teeth should also look healthy with no sign of infection or bleeding.

More so, check the behavior of each kit. They should be active and jumping around their cage. If any kit seems inactive or lethargic, it’s probably best to leave them with their mother.

2. The kits are eating adult food:

Most kits are weaned enough at six weeks old that they start nibbling on adult food. You’ll find them nibbling on the hay and alfalfa quite frequently, and they’ll also begin drinking water, which is another sign that the kits no longer need their mother’s milk and are ready to be separated.

3. The mother has started staying away from her kits:

Before the 6th week mark, the mother will be feeding her kits regularly twice a day. But because her instincts encourage her to breed frequently, she’ll start keeping a distance from the kits and will be drawn toward males.

Separating the kits from their mother

If the kits are showing the mentioned signs, it means they’re ready to be separated. However, this is a very delicate process, so you need to take extra precautions to ensure that each kit survives.

Here are the steps you need to take to ensure a smooth separation:

1. Identify the weak kits that aren’t ready for separation

There will always be a few fragile kits that haven’t weaned fully. A good way to identify them is to look for the smallest and most inactive ones. It’s best to leave these weak kits with their mother for a few days. During this time, they can extract all the nutrition from her milk and complete the weaning process required to survive alone.

2. Shift the mother and weaker kits to a new cage

In the wild, it’s the mother who abandons her kits so she can get pregnant again. Similarly, you should also remove the mother and weaker kits and shift them to a new cage with fresh bedding, food, and water.

The goal here is to keep the stress level of the newly separated kits to a minimum. If you handle them too much and move them to a new environment, the chances are that they’ll become frightened and overly stressed. This stress can result in Enterotoxemia, a disease that could prove fatal to the young kits.

3. Take care of the new kits

Once the kits are living on their own, the real challenge begins. Newly separated kits are highly susceptible to stress and diseases. Therefore, they need extra care in terms of hygiene, protection, and nutrition. There are also many small nuances that you must pay attention to during this time so you can increase the chances of your kits’ survival. Let’s discuss them in detail below.

How to care for separated kits

Right after separation, kits feel most vulnerable. During this stage, they are highly sensitive to stress and changes in diet. Rabbits do not take stress lightly and can become extremely sick or even end up dying.

To prevent this from happening, here are some important measures you need to take to ensure the survival of your kits:

Ensuring proper hygiene is crucial in the first few days after separation. Since the kits will be spending most of their day in their cage, it’s vital to keep it in pristine condition. Clean their uneaten food, wash their water bowls/bottles, and spot-clean their bedding where too many droppings have accumulated daily.

Once every week, replace the entire bedding and give the kits’ toys a good cleaning with warm water. If the nest box is still in the cage, try to get rid of it as soon as possible. The nest box is filled with feces and can cause a nasty eye infection if it gets in the kits’ eyes.

Stress can be deadly to young kits. It can throw their stomach’s bacteria of balance, resulting in diarrhea. This diarrhea can easily lead to Enterotoxemia, a form of blood poisoning caused by the toxins released by the rapidly increasing stomach bacteria. If left untreated, it could also turn fatal.

Because stress can be the indirect cause of Enterotoxemia, it’s best to avoid common stress triggers in rabbits. One common stress trigger is a new environment and loud noises. After separation, avoid moving the cage too frequently and soundproof the room as much as possible. Don’t allow any young children, cats, or dogs to go near the kits’ cage.

3. Take care of their nutrition

Feeding your kits a fresh and complete diet can also prevent diarrhea and immature death. The best diet for kits is the same as what their mother was eating during weaning. This diet often includes hay and alfalfa, which is best for kits as their digestive system is still quite fragile.

Find out which brand and type of hay and alfalfa was the mother being fed during weaning, and use the same type for the kits. Their digestive systems will already be used to it, reducing their chances of developing diarrhea.

For a few days, keep them on a diet of hay and about 16% alfalfa. Once it’s been a week, you can start introducing small quantities of fruits and vegetables such as:

Also, make sure the kits have access to fresh water at all times. Clean their water bowl daily and refill it with fresh water.

During the first few days after separation, you have to be extra cautious and look for any signs of infections or diarrhea. If you see any of the following symptoms, its best to contact your vet as soon as you can:

Even after the kits have successfully survived the first one or two weeks of separation, the trouble hasn’t ended. You have to separate the male and female kits before they reach 9-10 weeks of age. As soon as the kits become sexually mature, they’ll start reproducing.

Separate them in different cages and get both the males and females neutered/spayed as soon as possible. After they’ve become 10-11 weeks old, you can give them away to your friends or relatives if they’ve been waiting to adopt one. Brief them about their diet and how to care for the rabbits so they can happily live in their new homes.

How do you identify the gender of a baby rabbit?

Perform this only if you’re confident and the rabbits are at least nine weeks old. Gently place the rabbits on their back in your lap and pull the fur away from their genital area. A female should have a very slightly protruding tissue with a slit on it, while a male will have a tubular tissue with a small hole at the end of it.

Can you hold a baby rabbit?

Yes, you can start familiarizing your kits with human touch once they’re at least three weeks old without worrying about cannibalism on their mother’s part. Start by very gently stroking the kits in their cage with a single finger. After a few weeks, you can start holding them in your hands. Training rabbits to be familiar with human touch makes them excellent pets.

Why do rabbits kill their kits?

Rabbits can kill their babies both by accident and on purpose. If the mother finds a shortage of food, she will instinctually cannibalize the weaker kits to provide milk to the stronger ones. They can also accidentally kill them by injuring them with their nails.

Should you remove a dead baby rabbit from the nest?

Yes, dead kits can become a breeding ground for bacteria and can kill the rest of the kits. So, if you find any dead kits in the nest, remove them as soon as possible.

Should you move a rabbit’s nest?

You can move rabbi nests up to 10-inches away from their original location. However, don’t unnecessarily move the nest box as it might make the mother feel unsafe, and the kits will leave the nest box when they’re three weeks old anyway.