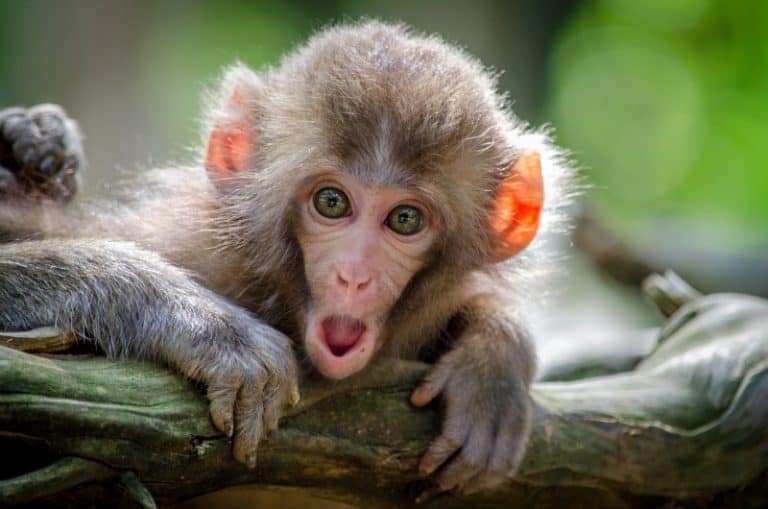 If you’ve ever thought about purchasing a special kind of pet, you might have considered owning a monkey. However, this type of animal is a little different to care for than a regular puppy or kitten.

In general, monkeys are considered exotic pets and cost far more than a cat, dog, or turtle.

Generally, purchasing a pet monkey will cost you anywhere between $4,000 and $100,000. This figure depends on the size of the animal, exact species of monkey, age of the pet, and overall temperament.

Of course, just because you have the budget to buy a pet monkey doesn’t mean that you should. These animals take a lot of extra care and some jurisdictions don’t even allow owners to have them without special permits.

How Much Does a Baby Monkey Cost?

Owning a monkey is a lot more work than most people are up to handling. These animals need constant attention and care in order to thrive, which is way more than most casual owners can commit to. Plus, special supplies and food have to be obtained.

However, if you feel purchasing a baby monkey is a good choice for your family, then there is the option to buy one. However, it will cost you a pretty penny depending on the breed, age, and size of the primate you’re looking to buy.

Capuchin’s are popular small monkeys that many people keep as pets. They generally cost around $7,000. The high end of the cost is generally chimpanzees, which are highly intelligent but much larger. Average cost for a chimp is $70,000 or more. Some people are able to adopt unwanted monkeys at a rate that is much lower, but this is usually pretty rare.

Other species of primates that fall into this range include marmosets, squirrel monkeys, tamarins, macaques, guenons, and tamarins. Each species of monkey has its own merits as a pet, with some being friendlier and easier to train than others.

How To Get A Monkey

Where is Owning a Pet Monkey Legal?

There’s a good chance that you might not even be able to purchase and keep a pet monkey where you live. There are several states that allow the ownership of primates and prohibit anyone other than zoos or wildlife centers from having them.

There are other states that have passed partial bans, such as in Arizona where it is legal to own a monkey but not an ape. Indiana, Mississippi, Indiana, Tennessee, and Texas allow ownership of some species of monkeys, but not all.

And it is important to remember that these are state restrictions. Some cities and counties within the legal states listed have imposed other ordinances which supersede the ability to own pet monkeys in these locations.

What is it like having a Pet Monkey? (Q&A)

Why Is It a Bad Idea to Purchase a Pet Monkey?

Unlike buying a cat or dog, there are many reasons why it is not a good idea to purchase a pet monkey. Sure, they can be absolutely adorable as babies. But they eventually grow up, which can make it difficult to care for them through old age due to size, aggression, and sexual maturity.

Owning a pet monkey requires a special area to allow them to thrive. While guinea pigs, ferrets, and rodents all thrive living in a cage, monkeys do not. This includes the small ones, too. If you’re going to buy a baby monkey, you must have a dedicated area where they can eat, sleep, and play safely.

Another reason why people have problems with pet monkeys once they’ve purchased them is aggression. Believe it or not, monkeys have a strong set of teeth that can easily cause severe injury to a human being. They can also scratch, claw, and pass on potentially serious viruses to their owners. They also like to throw around feces and urinate to mark territory, which isn’t pleasant for anyone.

Finally, the most heartbreaking reason not to purchase a pet monkey is the way the industry works. Generally, these monkeys are either smuggled into the country by unethical means or they are raised in conditions that are horrible in order to fetch top dollar for their sale. While there are people who breed monkeys the right way, these situations are few and far between, often costing the most money.

When Do Pet Monkeys Quit Being Babies?

While most pet monkeys resemble infant humans, they reach maturity level much faster that we do. At around age three, their demeanor will start to change and they can become more aggressive. This is when many owners abandon their pets because it starts to be too difficult and dangerous to care for them.

Unless you have a specific background in animal science, monkeys do not make good pets. Each year, thousands of people find this out the hard way, spending thousands of dollars to buy a pet monkey that they later cannot care for or control. The animals are then abandoned or given to rescue groups.

Is Owning a Baby Monkey Dangerous?

Like most young animals, owning a baby monkey isn’t all that dangerous. It is when the animal starts to grow and mature that they can be a potential risk for you and your family. After a couple years, they begin to develop hormones for reproductive maturity. This often causes a change in demeanor and an increase in aggression that can pose a potential risk for human owners.

How Much Should I Save for a Pet Monkey?

If you feel that you have the ability to care for a primate and have cleared ownership with your state government, it is important to save up to be able to buy that baby monkey. Generally, the cost to buy a pet monkey starts at $4,000 and goes up from there.

Baths and grooming are generally possible with a cat or a dog. But with pet monkeys? This task can be incredibly difficult. Add in the fact that they like to smear feces and urinate to mark territory and it is safe to say that pet monkeys are incredibly smelly.