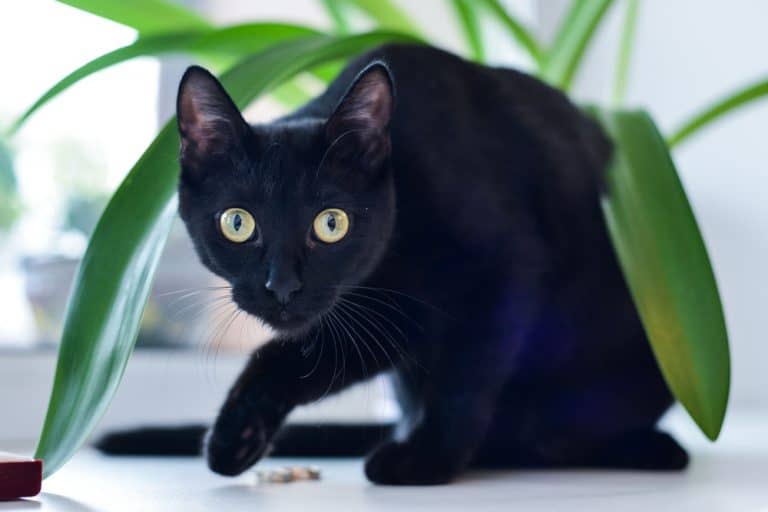 Bombays are easy-going, energetic cats. They love to play and thrive in big families. If you’re looking for the ultimate black cat, Bombays are a perfect choice. Their glossy coat and golden saucer-like eyes are highly sought-after.

Aside from its exotic looks, Bombays are endearing, playful, and agreeable cats.

Read on to learn more about these wonderful cats!

Much like the Bengal cat or the Savannah cat, the Bombay is a domestic feline with a feral appearance.

American breeders crossed black American Shorthair with sable Burmese cats to achieve the Bombay’s exotic panther-like appearance. Their striking, wild cat appearance has earned them nicknames like the “mini-panther” and the “parlor panther.”

Ms. Horner began the breeding project in the 1950s, and the first hybrid kitten was born in 1965. Horner named the successful breed “Bombay” because it resembled that exotic port city’s black leopards in India.

Bombays are recognized as an official cat breed by both the Cat Fanciers’ Association and the International Cat Association.

You can easily recognize Bombay cats by their glossy, dramatic black coats. You’ll notice that even their noses and their paws are black. This trait is uncommon in other black cats—just one more feature that makes Bombays stand out from the crowd.

Bombay cats are completely black from their ears to the pads on their paws. It’s easy for these cats to hide in dark places. When they emerge out of dark alleys, they can startle you. While most Bombay’s have a tinge of pink on their paws, they have a unique physical appearance that sets them apart.

These sleek, medium-sized cats are habitual heat-seekers. It’s not uncommon to find a Bombay cat resting peacefully near any heat source. They love to curl up near a sunny window ledge for warmth, or even better—on top of their favorite human!

If it’s cold outside, you’ll most likely find your Bombay in the warmest place in your house. They love to sleep beside a fireplace and feel the warm heat. If you live in a chilly environment, you will need to keep your Bombay cat warm and snuggly indoors. You must guard all the hot heat sources to prevent your cat from painful burns. As much as they seek out heaters and fireplace warmth, they also enjoy getting other animals. It’s not unheard of to find a Bombay cat sleeping with the family dog on a cold winter’s night.

This news will come as a happy surprise for anyone looking for a low maintenance cat. The Bombay’s fuss-free short hair and dense coat don’t require much grooming beyond weekly brushing.

This cat breed also sheds less than the average kitty.

“Velcro cats” is an apt name from Bombays that keep close to their beloved owners. They will seek their favorite human’s attention and follow their owner from room to room.

They’re also good with strangers. You won’t find Bombay cats running to hide under the bed when your friends arrive. Bombay’s are likely to greet you—and anyone else—with a warm welcome at the front door.

These social cats hate being abandoned for long periods, and they’re prone to depression and loneliness if left alone for too long. This can also lead to destructive behavior. If you’re away at work all day, leave some treats and toys for your kitty to enjoy. You can also provide them a scratching post to stay busy and distracted.

Make no mistake—Bombays love to be in charge. Although friendly, Bombays usually get along with other cats and dogs. But they always prefer to rule the roost.

These playful cats are highly intelligent. You can successfully train them to perform tricks and to play fetch. Some of them can also learn to walk outside on a leash!

Bombay cats like to burrow in blankets. It’s not unusual to find a Bombay cat nestling in a pile of laundry or underneath your quilt. This is the perfect arrangement for owners who enjoy snuggling up with their pets at bedtime. Just be careful when you jump into bed—there could be a small kitty hiding beneath your comforter.

British and American breeders took different approaches to the creation of Bombay cats. American Bombays are a cross between a sable Burmese and a black American Shorthair, whereas British breeders paired black domestic cats with Burmese cats.

The two breeds are similar, but the main difference is in their eyes. American Bombays have gold or copper eyes, while British Bombays have green eyes.

Bombays feature a winning combination of good manners and good looks. One thing we know for sure – they’re black cats that won’t curse you with bad luck if you cross paths with them.

Get ready for a surprise if you haven’t heard a Bombay cat purr. They are popular for their loud purring when they’re around their owners. They also respond when their owner talks to them. Bombay cats have unique personalities and a great vocal range. They even sound and act like humans when they talk back. This is another endearing feature that makes Bombay cats attractive to pet owners. They make great companions for people. It’s nice to have a conversation with your pet, even if you don’t speak the same language.

When you compare pictures of a black Leopard and a Bombay cat, you will quickly notice the resemblance. This was the main goal of the breeders who began this project in the 1950s. They wanted a cat that looked like a miniature Leopard.

Bombay cats have the Burmese breed’s physical structure and the black color of the American short hair. If you wake up in the middle of the night, you may get scared if the Bombay cat jumps on you in the low-light room. They look like a leopard, just in a miniature version.

13. They have a unique eye color

Bombay cats’ eye color ranges from copper to gold. This hue looks striking against the black satin coat. Bombay cats begin to change eye color when they are four months old. If you’re picking a Bombay kitten from a litter, there’s no real way to determine the eye color it will develop.

Bombay cats’ most endearing quality is their loyalty. They can form an affectionate bond with family members. While they love attention and affection from all family members, they seem to pick one favorite person. Bombay cats will form a strong connection with this person and follow them around the house! If you have a regular schedule of coming home, your cat will learn and expect you at the door. Don’t be surprised to find your cat waiting at the entrance to greet you. One of the most remarkable qualities of a Bombay cat is their devotion to their owners. Attention loving Bombay’s love to rub against their owner’s legs and are happy to relax at your feet. They love physical contact and are fiercely loyal.

15. Bombays are a new cat breed

The Bombay cat breed came into being in the 1970s. Breeders began experimentation in the 1950s, but it took a while to achieve their desired goals. It takes effort and persistence to register a breed and gain recognition from the Cat Fancier’s Association.

Nowadays, Bombay cats are popular and are eligible for pedigree. Some people believe that this breed came from cats interbreeding with wild panthers, but that isn’t true. Bombays may have a strong resemblance, but it took selective breeding and a lengthy process to produce them.

Bombays are highly intelligent cats, which makes them more sensitive than others. They are an emotional breed that needs positive reinforcement. Bombays don’t like being mistreated or ignored. You should never use negative reinforcement methods like punishing your cat. There are better ways to get your Bombay cat’s attention. If you want to raise a healthy Bombay, you need to offer love and attention. Your sensitive feline also needs frequent playtime!

These wonderful cats are happy to show their love for you with a belly massage. Bombays enjoy rubbing and kneading their owners. You’ll get personal massages for free, but be careful of the claws. If your cat accidentally scratches you, it’s time for you to discipline them. Bombays are smart cats, so it’s easier to train them. Your cat will soon learn to be mindful of the claws. They usually purr while they are giving you a good massage. This is another behavior of Bombays that makes them so popular.

Bombays enjoy human companionship. They are one of the biggest attention seekers in the cat universe. They love sitting in their owner’s lap for a good cuddle session. Your Bombay cat will circle your legs and beg to be in your lap. You can’t resist their pleading eyes when they look up at you. If Bombays can’t get your attention, they’ll jump onto your lap uninvited.

Bombays are easygoing and tolerant cats who take life as it comes. They enjoy greeting visitors and get along well with children, dogs, and other pets. Bombay cats can also adjust well to their new environments.

These cats are a perfect choice if you have multiple pets in your home. As long as your other pets are cat friendly, Bombays are incredibly tolerant of pets and children. They are patient cats, so you won’t need to worry about your dog and cat fighting.

Bombay cats have a big tendency to stare. They set their gaze on one person or thing and observe them for a while. Some people think that this is creepy, but Bombay cats are studying what they are looking at. They never have any ill intent.

Bombays are intelligent cats, and you can’t always tell what’s going on in their minds.

21. Bombay cats are named after a port

Bombay cats were given this name not because they were born in India for the first time but because of the inspiration.

Bombay cats – a name that was given to this particular breed because of the inspiration form leopards in India. So basically Bombay cats are named after a port in India where leopards are common.

Though the person who named them wasn’t from India.

22. Bombay is not a natural cat breed

Bombay cat breed did not exist until the 1950’s. It was in the late 1950s when the Bombay cats were born as a result of a breeders’ experiment. 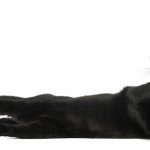 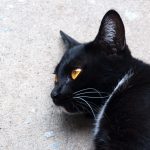 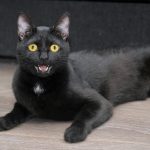 Are Bombay Cats Vocal? Do They Meow A Lot? 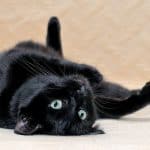 Are Bombay Cats Friendly and Affectionate? Or are they Mean?