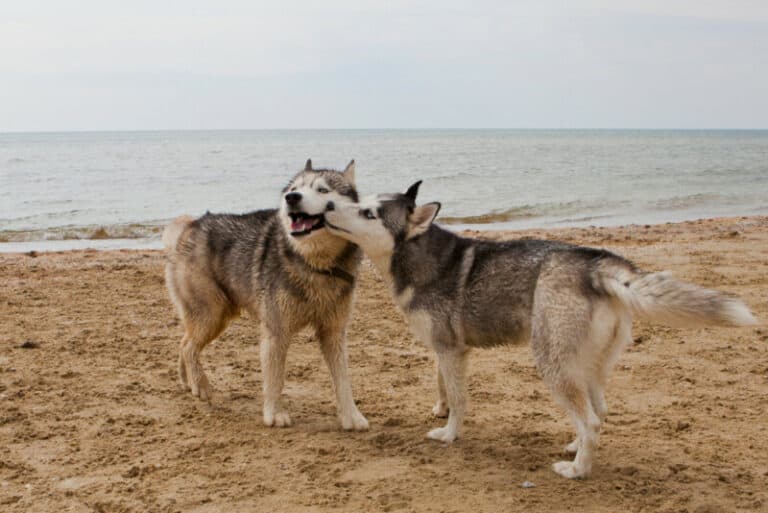 Spaying is a veterinarian-recommended practice that involves the removal of reproductive organs from female dogs. It prevents them from going into heat and getting pregnant.

Is it still possible for a dog to go into heat despite having no reproductive organs?

Spayed dogs can go into heat. This usually happens when some ovarian tissue is left behind during the surgery. This remaining ovarian tissue continues to produce heat-inducing hormones, primarily estrogen. The condition is known medically as Ovarian Remnant Syndrome.

Is Ovarian Remnant Syndrome dangerous? And if so, what should you do about it? Keep reading to learn exactly what to do if your spayed dog goes into heat.

Usually, when female dogs are spayed, their entire reproductive tract is removed. That includes the ovaries, fallopian tubes, and uterus.

Intact ovaries in healthy female dogs produce estrogen. This hormone causes them to cycle in and out of heat, usually once every six months.

Going in heat is problematic for several reasons.

The solution? Surgically removing the ovaries. No more estrogen in the body means female dogs will lose their natural desire to reproduce.

Removing the entirety of the two ovaries requires skilled handiwork. Spaying is a relatively more challenging procedure compared to neutering.

In rarer cases, the dog will naturally have an extra piece of ovarian tissue other than her two ovaries.

Even if the two ovaries are removed completely, this extra tissue, usually hidden in the abdomen, can pick up the slack.

The dog will still go into heat the way a fertile dog would.

The first heat can occur anytime from a few months to years after the spaying surgery.

The average time dogs with ovarian remnants take before going into heat after a spay surgery is 15.5 months.

They’ll still want to mate and display the associated behaviors, but without their reproductive organs, they can’t produce any offspring.

Ovarian Remnant Syndrome will cause your spayed dog to go into heat. That’s problematic but not obviously dangerous to owners.

Some pet owners simply leave their dog be. It’s not an issue if the dog can’t get pregnant, right? Well, there’s more to it than that.

Female dogs who produce estrogen are much more likely to develop diseases and disorders. This is actually a large part of what makes spaying ethically acceptable to most people.

Here are two of the more serious medical problems that affect dogs who are intact (unspayed) or have an ovarian remnant and, therefore, estrogen in their body:

Spayed dogs with ovarian remnants can still develop pyometra of the uterine stump, a part of the uterus that’s usually left behind.

Leaving an ovarian remnant might not cause any immediate problems, but it increases the odds that you’ll run into one down the line.

I recommend visiting your vet to have it removed.

If your spayed dog is in heat, it’s most likely an ovarian remnant.

The symptoms of this condition are similar to what you would see in a dog in heat.

Here’s what to look out for:

Dogs with ovarian remnants will keep going in heat every six months or so, so it’s not a self-resolving condition.

What Should I Do If My Spayed Dog is in Heat?

If you suspect your dog has an Ovarian Remnant, you should book an appointment with your vet and let them know of the symptoms you’ve noticed.

Fortunately, there are quick and effective tests to check for remnants.

In any case, having your dog checked while she’s in heat is best since the remnant’s size and activity are highest at that point, allowing for easier visual identification.

Ovarian remnants are removed surgically. The operation is similar to a regular spay surgery.

Earlier I mentioned that spayed dogs with ovarian remnants usually take at least a few months to go into their first heat after surgery.

If yours has gone into heat within days after her surgery, it may be a false pregnancy.

This is a rare condition in which the sudden drop in pro-estrogen causes symptoms of pregnancy to manifest.

This condition usually resolves itself within a few weeks as her body adjusts to its new hormone levels. Your dog may develop enlarged mammary glands, and her motherly instincts will be at an all-time high.

Still, I recommend you visit your vet. They’ll help you rule out the possibility of a pregnancy and, if necessary, prescribe hormone-inhibiting medication to help with the symptoms while your dog recovers.

Have a look at some frequently asked questions before you go:

Can a Dog be Spayed While She is in Heat?

You can get your dog spayed while she’s still in heat, but I don’t recommend it. Most veterinarians will ask you to wait until the current cycle is over before operating on the dog.

As with all surgeries, there is a risk of medical complications arising during the operation.

This risk is higher for dogs who are in heat.

The surgery will also take longer and likely cost you more.

How Do I Care for a Dog in Heat?

Spaying is the best option, but it’s preventative and won’t do much for you if your dog is already in heat.

Here are a few tips to help you and your four-legged companion get along until her hormone levels are back to normal: 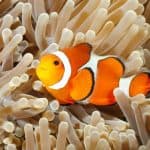 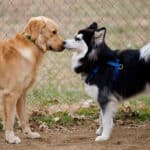 10 Ways to Mask the Scent of a Dog in Heat

Stages of Pregnancy in Pitbulls 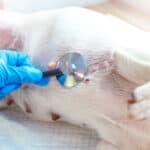 Will my puppy’s nipples go back to normal after heat?