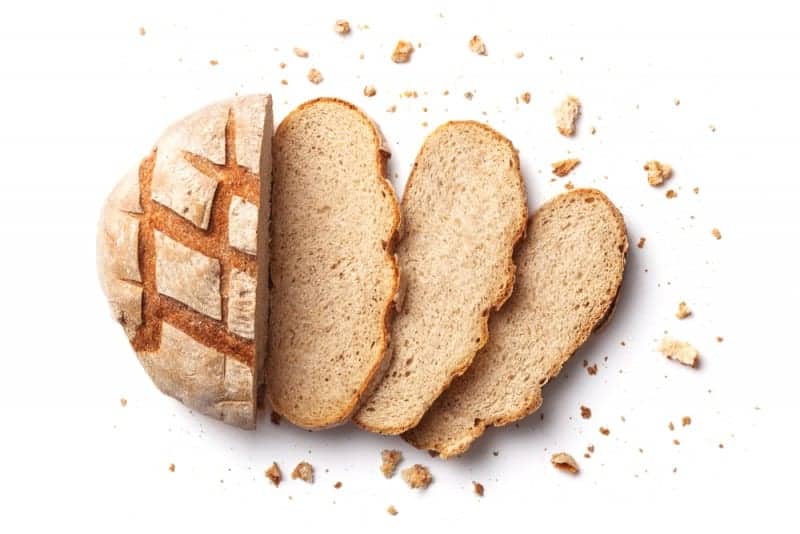 I’m sure, you must have seen children feeding pieces of bread to the fish in ponds. Or it’s also common that pet owners feed some bread to a fish if they run out of fish food. There shouldn’t be any problem, as they feed bread sometimes to their dog also. Pretty good? Well, I was skeptical about feeding my fish bread, and that is why I started to ask experts and wise women and men.

Can fish really eat bread? Is bread healthy for them? Here’s what I found out:

No, fish can’t eat bread as they can’t digest it. Fish’s digestive system is not as tough as we humans and dogs. Feeding bread to your fish can lead to many serious health problems. So, go for some healthy alternatives, and eliminate bread from fish’s meal altogether.

Do you want to know what ingredients in the bread make it unhealthy for fish? And what are some healthy food options? Read below; we’ve got all the answers.

No, fish don’t eat bread. I mean, they do eat bread if you feed them, pretty much like other animals, but bread isn’t healthy for them at all.

Do you really think bread would be a meal for fish? No, because bread isn’t a natural food option, and fish isn’t used to it. They don’t find bread on the sea bed and in deep oceans. And they can’t make the dough and bake a bread loaf, obviously. Fish would only eat that food happily that is primitive to it.

Now let’s find out what’s in the bread that makes it a no-no for fish.

Why isn’t bread healthy for fish?

To know the health consequences, you should know what bread is made up of? Bread is made up of processed flour, salt, some sugar, yeast, and milk or water. Then it’s baked and you get a nice, fluffy bread loaf.

Seeing the above process of bread-making, we can conclude that bread does contain several ingredients that are questionable. The most obvious culprit is yeast. Yeast swells in the tummy of fish, and fish feel bloated and constipated.

If you feed bread to your fish every day, then their stomach would swell due to constipation, and the waste material would turn into a poison. Fish can’t survive it. They feel extremely sluggish, and if this situation persists, they may die after five to six months.

Health risks if you feed your fish bread:

If you’re used to feeding bread to your fish, then your fish can suffer from:

Now that you know bread isn’t healthy for your fish at all, then the first step to take is just don’t feed bread to them from now on.

Next, you can give fibrous food to your fish that would ease their constipation. Once they poop, clean the tank carefully and remove all the debris.

If you feel that your fish aren’t feeling well even after feeding them the right food, then call a vet for proper treatment.

Due to these health risks, the United Kingdom has actually banned bread for fish. They have also banned bread as bait for fishing purposes. This was decided when it was investigated how fish die in the ponds that are visited by the locals. They used to feed the fish bread on a daily basis.

Other human foods that are unhealthy for fish

It’s not only bread but many other foods that are suitable for us humans, aren’t suitable for fish. So, don’t try to feed your fish whatever you are eating. The thing that is healthy for you, might be toxic to your fish.

Some of the foods that are not suitable for fish are:

The key to remember is that the foods high in calories and carbs aren’t suitable as fish food. Whereas, the food that is high in fibers and protein is great for them.

What should you feed your fish?

Fish require protein, fats, carbs, vitamins, and minerals in the right amount for their proper growth and development. Fish need maximum protein and minimum carbs in their diet. The fat portion should be very less.

Fish’s food also depends on the type of fish. Fish can be herbivore, omnivore, or carnivore. So, their diet can not be the same. Herbivore fish only need plants, whereas, carnivores only need protein in the form of meat. Omnivores would like to eat both; plants and animals.

It’s best to give a balanced diet to your fish. Make a list of foods that are suitable for the fish, and only feed those. Prefer fish food available in the market by famous brands. Don’t experiment too much.

Below are the foods that you should feed your fish.

To be in a safe situation, always feed your fish commercially available fish food, rather than trying to feed them everything at home.

Do you think algae that grow in the fish tank are healthy for the fish? Read here to know if algae is healthy food for fish.

The digestive system of fish is very different from that of humans. It is rather fragile. So, if you want to feed your pet fish anything you’re eating, then stop! Double-check whether the food is suitable for the fish or not.

So, what about bread? Do fish eat bread and is it healthy for them? No, fish can’t digest bread, and consumption of bread can lead to stomach swelling and constipation.

There are various foods other than bread that are not good for your fish’s health. You can also check with the vet to take guidance on the foods that are toxic to fish.

There is a wide range of food that is healthy for fish. You can go for them without any doubt. These food are rich in protein and fibers that are great for fish. Also, the food you feed your fish must be of low fat.

I know, there must be more you want to know about what to feed fish and what to avoid. Here are some FAQs that can guide you even more.

Biscuits are high in carb and sugar. Fish don’t need this much of sugars and carbs. So, don’t feed any sort of biscuit or cookie to your pet fish, save them for yourself.

Biscuit can cause fish constipation and stomach swelling that can lead to other problems as well.

No, mold can infect your fish. So, don’t try to feed your fish stale or moldy bread. Even fresh bread isn’t good for their health.

No, bread isn’t the right food for tropical fish, as well as its not the natural food that they can easily digest.

Fish can’t eat raw rice as they are not good for them. You can feed your Goldfish or Chiclid a few grains of boiled rice, but not on a daily basis. The reason is that the rice doesn’t have the nutrients that a fish wants. Although, rice isn’t poisonous, but they are not healthy either.