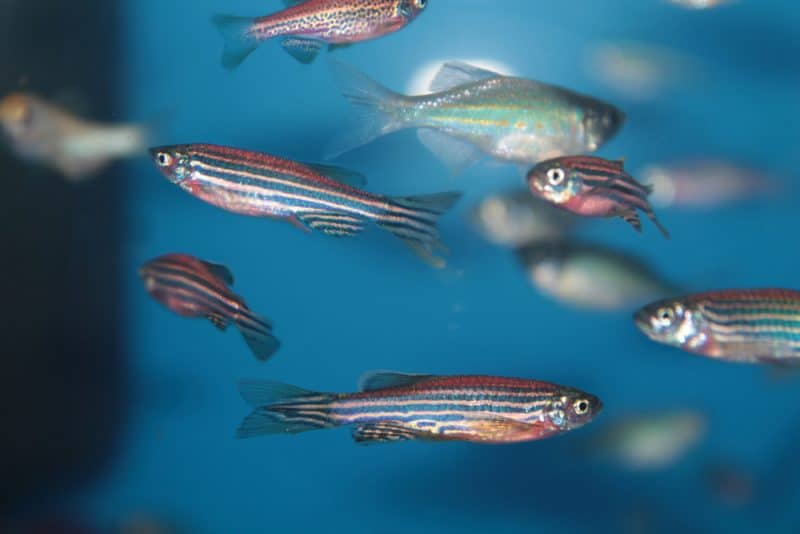 You would be surprised to find out that Zebra Danios can’t get pregnant – because they aren’t livebearers. However, they are easy to breed. All you have to do is keep the male and female fish in the same tank, and they will spawn.

So, how to tell if your Zebra Danio is Pregnant? The female Zebra Danios are usually fatter compared to the males who have sleeker bodies. If your female fish looks wider than usual, chances are she is carrying roe. As already mentioned that Zebra danios aren’t livebearers which means the females don’t carry fertilized eggs; hence this is as close as they get to be pregnant.

If you are looking for sure shot ways to find out whether your Zebra danios are pregnant, dive in to get some helpful answers.

Ensure the fish you are looking at is actually female and not just a fat male. Since both the male and female counterparts look almost similar, however, if the fish under question turns out to be male, it could be facing some serious health issues. Generally speaking, the female danios are slightly fatter than the males regardless of whether they are carrying roe or not. Males usually have slender as well as smaller bodies compared to females. The male zebra danio has a torpedo-shaped body while the females tend to have a bigger belly. Both males and females have the same stripes and two pairs of barbells, however, the females are bigger.

Another helpful tip in finding out the female zebra danios is that they are slightly less colorful compared to the male. So, before finding out if your danio is pregnant or not make sure the fish is female.

Look closely at your female zebra danio. If it looks wider than usual, chances are she would be carrying roe. Since the zebra danios aren’t livebearers and they don’t carry the fertilized eggs, the pregnant fish aren’t visibly too fat. In case your female fish is carrying roe, it will drop the eggs which will be fertilized by the male fish during spawning.

The temperature of the Water

One way to find out whether your zebra danio is pregnant or not is by paying attention to the temperature of water in your aquarium. Danio fish spawns in the temperature range of up to 78°F.

If the temperature is lower or higher than this range than it is unlikely that your danio will be carrying roe. Raise the temperature a few degrees to trigger the spawning around dawn as danios spawn in the mornings.

So, noting the temperature will help you to figure whether the fish is carrying roe or there may be some other issue with it.

Another way to figure whether your zebra danios are pregnant or not is by watching their behavior closely. Zebra danios usually spawn in the mornings. So, if you find your fish chasing each other at this time, your female danio may be carrying roe, and the fish may be very close to spawning. If you notice this almost-violent behavior in your fish, our danios may already have spawned and fertilized eggs.

Zebra danios are prolific breeders, and an interesting fact about is that they are very loyal to their mate. So much so that a mated pair will most likely stay together for the whole life and not spawn with anyone else. Even if one of them lose their mate, they won’t choose another one. The best way to let them mate is by starting with a school of 6 danios and allowing them to choose their mates.

Since Zebra danios are schooling fish, they must be kept in groups. As the schooling fish get stressed if they are too low in number, danio may show aggression in stress and act strangely while losing appetite as well. So, make sure that your fish isn’t violent due to stress before jumping to the conclusion that it is pregnant.

New hobbyists usually begin practicing breeding with zebra danios as they are prolific breeders. However, you will have to follow the below steps to ensure a good breed:

Zebra danios are active and lively fish that will go the lengths of your tank and make you smile with their energy. They are easy to maintain and easy to breed which makes them the perfect choice from the beginner hobbyists. With our guide, you are sure to find out when your female zebra danios are carrying roe and the steps you need to follow for successful breeding.

Do zebra danios survive with other species in the tank? Zebra danios are very fun mates, and they love to live in communities. When it comes to tank mates, they can survive with a good five other species. They need the tank to be crowded to stay more active and keep playing around without getting stressed.

What behavior of zebra danio makes it suitable for community tanks? Zebra danios exhibit a rather interesting behavior that resembles ADHD. They stay active and keep moving around the tank randomly. This behavior provides for a good distraction to the other aggressive fish present in the tank and helps them from staying away from trouble.

How long does the zebra danio live? The fish lives for around 3.5 years of age and some may even live for up to 5 years of age. Their size, however, remains small that is between 5 to 7 centimeters longs. Their lifespan in captivity is around two to three years, but they live up to 5 years under ideal conditions.

What makes the zebra danios favorite for the freshwater hobbyists? Zebra danios are among the favorites of the freshwater fish hobbyists as they are easier to look after and breed. They are active swimmers and keep the environment of the tank lively with their movement and playfulness. Also, these fish are durable and withstand a remarkable range of tank conditions and temperature. They can survive without a water heater as they are comfortable with temperatures as low as 60°F. In short, these are very convenient fish with a fun mentality and lovely appearance.