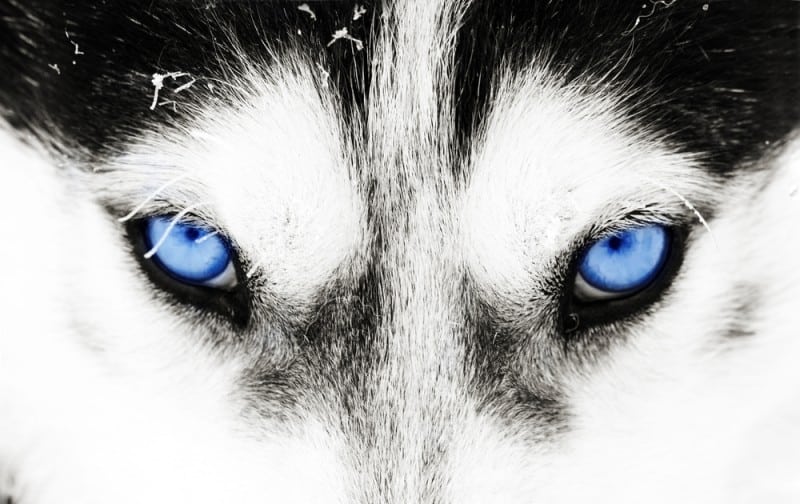 So you’re taking a picture of your dog with flash one day.

But surprisingly, you notice that only one of their eyes is glowing green.

When both of them should have that green glow, why is it that one eye isn’t? There can be three reasons for this; either one of their eyes lacks tapetum lucidum, the tapetum lucidum is glowing in a different colour, or your dog has a lazy eye.

But what do all these difficult terms mean, and how do they correlate to this issue?

If you’re asking yourselves those questions, read on below to find your answer.

Green glow of a dog’s eye

We’re all pretty familiar with that creepy greenish glow in the eyes of dogs. Most owners would recognize these from when they took a flash picture of their pooch, or maybe when they shined a light into their eyes at night.

Normally, both of your dog’s eyes should have that glow under light. But with some dogs, that’s not the case. So why is it that one of their eyes doesn’t have the green hue? To answer that question, we must first understand the anatomy of a dog’s eye and the reason for that green glow.

Anatomy of a dog’s eye

The basic anatomy of a dog’s eye is quite similar to that of a human or any other pet such as cats, wolves, deers, and horses. However, dogs are ancestors of wild wolves and are basically a domesticated version of them that has evolved over several hundred years.

But with that evolution, some of the features remain within dogs while others fade away. One of those ancestral features of dogs is that green glow.

How do the eyes of dogs work?

The way that a dog’s eye or a normal eye work is that light enters through the pupil while the iris controls how much light gets in by contracting and expanding.

This light hits the retina, which contains a number of light-sensitive rods and colour sensitive cones. These rods and cones pick up the light and convert them into electrical signals, which then travel to the brain through the optic nerve.

What’s unique is that dogs usually have more rods than cones compared to humans. The larger number of rods allows their eyes to pick up more light and motion signals which make dogs better at detecting movements. However, the absence of cones prevents them from seeing as many colours as we humans do.

Why do dogs have that green glow?

Both wolves and dogs are nocturnal beings. This means that by nature, they’re designed to hunt at dusk and dawn. These are the times of the day where light is scarce and visibility is low. So in order to make up for that weakness, most nocturnal beings have a special lens that allows them to see more light even during dark situations.

Basically, this feature is kind of like natural night vision goggles for dogs. This makes it easier for them to hunt during the dark when light is little. In comparison, humans and other primates do not have that lens. This is why our eyes show a reddish hue instead of a green-bluish one as we do not possess that special lens as we were naturally made to be more active during the day.

What causes that green glow?

The special lens we talked about that gives the eyes of nocturnal the green glow is called a tapetum lucidum. The tapetum lucidum is a reflective layer of lens between the optic nerve and the retina of their eye.

Because the tapetum lucidum allows more light to reflect and hit a larger surface area of the retina, the eyes of dogs are able to process even more light which allows them to see clearer at night and in the dark.

What’s interesting is that although this glow is usually has a greenish-blue hue, it can vary vastly from dog to dog. The pigment cells that make up the tapetum lucidum are zinc and riboflavin, both of which vary in quantity from dog to dog, giving their eye a different coloured glow in the dark.

Although naturally both of your dog’s eye should exhibit a glow, there can be several reasons why only one eye is and the other isn’t. These can be either due to inherited conditions or due to a medical condition that they have developed later on. Here are some of the most common reasons for this phenomenon:

One of the tapetum lucidum has a different hue

Probably the most common misconception here is that if one eye glows green and the other doesn’t, there’s certainly a problem. But like we said earlier, every dog has different levels of zinc and riboflavin in their body.

That can cause one of their eye to show the more common greenish-blue hue while the other eye might have a different one. Some dogs might even have a yellowish, purplish or even an orange hue to them.  However, that does not mean that their eye doesn’t have tapetum lucidum or there’s some defect in them.

It simply means that both eyes have varying level of pigments which causing the change in hue. So if both of your dog’s eyes are shining with a different hue, but they both do have a visible glow, there’s probably nothing to worry about. Mention this to your vet next time and he’ll help decide whether the condition requires treatment or not.

One of their eyes is missing the tapetum lucidum

If you notice that one of your dog’s eye is glowing bright green, while the other has a faint red hue or no glow at all, one of their eyes might completely be missing the tapetum lucidum lens.

This condition is called Tapetal Hypoplasia and is usually an inherited disease where either one eye completely lacks the tapetum lucidum lens. This causes that eye to have the same faint red eye glow that humans do in the dark.

In some dogs with heterochromia where one eye is a different shade from the other, the lighter coloured eye which is usually blue gives off the same red hue. But in this case, the reason is that the dog’s eye is looking directly into the flashlight and thus the tapetum lucidum reflection isn’t visible.

They have a lazy eye

Another possible explanation for this phenomenon is that your dog has a lazy eye. So while one eye is looking directly at the camera or the light, the other has a slightly different angle. Because of this, light reflects into the tapetum lucidum of the eye which is looking directly. While in the lazy eye, the light cannot hit directly due to which there is an absence of a glow in that eye.

A lazy eye can sometimes correct itself in some puppies as they grow older. But if it develops into adulthood due to some disease or injury, it will take corrective surgery or medical procedures to correct. You can talk about it with your vet so that they can confirm whether your dog actually has a lazy eye and whether treatment is required or not.

They are suffering from an eye disorder

Certain eye disorders are also responsible for causing the absence of glow in a dog’s eye. And although these are rather rare, some of them can be progressive and might require surgery or medication to correct.

Progressive retinal atrophy is one such disorder which causes the rods and cones responsible for converting light into signals, start to die off. This is a progressive disease and gets worse with age to the point where your dog can become completely blind. And the worst part is, there’s currently no treatment for this disorder.

PRA is caused by defective genes and it occurs mostly in male Siberian huskies and Samoyeds. The best way to prevent them is to get a genetic test for PRA before you get your dog to prevent your dog from eventually becoming blind.

Other disorders include dry eye, thickening of the lens and cataracts. All of these disorders cause the hue in your dog’s eye to start disappearing and can gradually blue their vision. These disorders can be corrected through surgery and medication if spotted early, so it’s necessary that you get your dog’s eyes checked regularly whenever you visit the vet to rule out any problems.

Other reasons for abnormal glow in a dog’s eyes

There are several other reasons why your dog might be showing an abnormal glow in their eyes. And although most of these are quite worrying to the owners, the problems are actually normal and something that fixes itself with time.

Here are other reasons why your dog’s eyes might be showing a different glow:

Some of you puppy owners might get really freaked out after seeing different hues in your puppy’s eyes. And although this does sound scary, it’s a natural process that happens with every puppy and is nothing to worry about.

During the first 16 weeks of a dog’s life, their eyes change a lot, including the shape and size. The tapetum lucidum is also developing at this time, due to which the glow in their eyes can change multiple hues and can often appear blue, green, yellow, orange or even shades of purple. After the 16 week time period, the hue of the glow usually becomes stable.

Apart from all the other factors, the type of light that’s shining in your dog’s eyes also play an important role in determining the hue the tapetum lucidum will give off. When you shine headlights, lamps, led torches, flashes or lights with different filters, it’s possible that you will see a different colour each time.

Also, the angle of the light also matters. Usually, when your dog is looking straight into the light, that’s when you’ll see the true colour of their tapetum lucidum. At different angles, the glow might change hues or may not even appear. However, that does not means it’s not present.

Most of you would be inclined to get your dog checked and treated as soon as possible for this disorder, but let’s just clear it right away that this is not an emergency.

The tapetum lucidum only allows dogs to see slightly better in total darkness and is usually useful in wild situations where they’re trying to hunt in a pitch-black environment. However, in-home environments where there’s plenty of light available, not having this lens in one of their eyes probably won’t bother them that much nor threaten their life.

However, if the tapetum lucidum disorder has arisen from a medical condition or injury, you need to get your dog checked by a vet as soon as you can. There might be a chance that an underlying medical condition that has just recently started to become severe, damages your dog’s eye more and more with time.

Also, if your dog accidentally hit their eye with their paw or scratched it, urgent medical attention would probably prevent their eye from further harm or developing an infection. If you notice any sudden change in their eyes, immediately take them to a vet so you can protect them from further damage.

So now that you know, not seeing a glow in one of your dog’s eyes is most probably nothing to worry about. Most probably because the glow was never there in one eye, or you never noticed it. There are also many other possibilities such as a change in angle or their eye portraying a different hue, which is also not an emergency.

However, you must still know that it’s important to address any abnormality that didn’t exist before. Especially if you suspect that the change in the hue has appeared suddenly due to either a medical condition or an injury, it’s best to take your dog straight away to a vet to avoid the chances of your dog completely losing sight in one of their eyes.