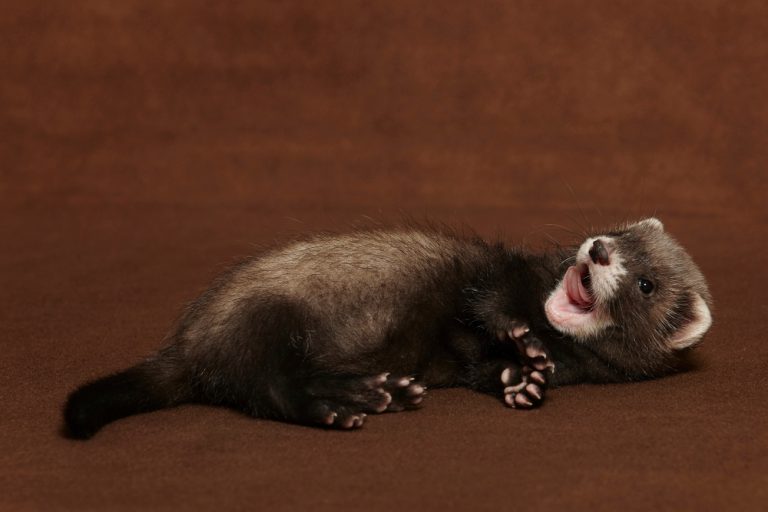 If you’ve cleaned ferret poo, you know how much worse it is than that of dogs, cats, or possibly any other pet to exist.

And if that ferret is untrained, you basically have a disaster at your hands.

So how can you possibly stop your ferret from pooping anywhere and anytime they like? Like other pets, ferrets can be litter trained through positive reinforcement. To prevent them from pooping everywhere, you should get them a litter bin and litter train them by yourself or with the help of a trainer.

But along with training, you still need to cut off your ferrets’ access to places around the house where they can poop again.

To find out how, keep on reading ahead!

Why do ferrets poop everywhere?

A ferret that has no control over where they poop can become a serious problem for owners in many ways. Their droppings can leave an awful stench around the house. The poop can become very inconvenient to scrub off carpets and floors. And perhaps the biggest issue is the hygiene problem the poop creates.

But why do ferrets poop around the house in the first place? That’s because they don’t possess the instinct to defecate in their litter. Most ferrets will simply poop in their favorite corner. And because they naturally have a fast metabolism, they will defecate quite often too.

The only reliable and permanent way to stop your ferret from pooping all around your house is to litter train them. You can also use some effective techniques to prevent your ferret from defecating in certain places which we’ll discuss later.

How to litter train your ferret

While there are hundreds of so-called ferret experts on the internet with their own opinions and claims, the only permanent method to stop your ferret from pooping everywhere is to litter train them properly.

Many people believe that it’s impossible to train ferrets. However, ferrets can and have been successfully litter trained by thousands of owners around the world. Much like cats and other household pets, ferrets can also be taught to defecate in their litter through positive reinforcement. All that’s needed is consistency and a little patience.

Here is a step-by-step guide on how you too can easily litter train your ferret:

Before anything else, you want to purchase a litter box that’s big enough for your ferret to poop comfortably. Make sure that the litter pan can fit in all of their four feet, particularly if you have a male ferret. They won’t go unless they can place all of their feet inside their litter box.

Remember to choose a litter pan that has low borders. The easier your ferret finds to get in and out of their litter box, the more encouraged they will be to use it. Ferrets are very mischievous pets, so they’ll try to move and roll their litter pan around their cage. So try to find one that can securely fit in the corner of their cage. If there’s no way to attach it, drill a couple of holes and use a metal wire to secure it against the cage bars.

2. Choose the right type of litter

Selecting the right litter is crucial for ferrets as they’re very sensitive to dust and scents. They also tend to play around in their litter, so you want to avoid anything that’s too fine or can be inhaled by your ferret.

The best litter for ferrets is one that’s:

Some great litters that meet these criteria include:

All of these litters are quite absorbent and control odor very effectively. They’re also free from dust, unscented, and cost less than other options. There are also a few litters that you should avoid at all costs. These include:

These litters can cause serious respiratory illnesses in ferrets. In particular, clay-based and corncob litters pose a threat of intestinal blockage if a ferret accidentally consumes either.

3. Litter train your ferret in their cage first

When your ferret is accustomed to pooping all around your house, their training should begin inside the cage. The purpose of this practice is to block off all other places where your ferret could poop and teach them that the litter is where they’re supposed to defecate instead.

However, this doesn’t mean that you should lock away your ferret in their cage all the time. Whenever you can supervise your ferret, let them out of their cage to play and explore. But when they seem like they want to go, place them back in their cage immediately.

4. Teach your ferret how to use the litter

To kick off litter training, start by picking up all the poop your ferret left around the house and place it in their litter box. If you can, give your ferret a chance to sniff and explore the content of the litter box.

Ferrets have an instinct to defecate in the same place they did before. So when they smell their feces in the litter, they’ll understand its purpose and start using it. Almost all ferrets have a habit of pooping first thing in the morning. This is an excellent time to place your ferret in their litter so they can start developing a habit of using the litter box regularly.

5. Praise and treat your ferret for using the litter

Positive reinforcement has been noted to work quite effectively in the case of ferrets. Praising and giving your ferret treats after they use their litter is a great way to start the training process.

You can use both verbal or physical praises to encourage your ferret. Use a high-pitched voice to give them praises and show excitement when they successfully use their litter. Physical contact is also a very rewarding experience for most ferrets. You can let them out of their cage and pat them, cuddle with them, or play with their favorite toy to show them your appreciation for pooping in their litter.

If your ferret responds more to treats, give them a bite of their favorite food after they use the litter. Using a combination of verbal and physical praises and treats can quickly reinforce your ferret’s litter behavior and train them much faster.

5. Regularly clean and maintain the litter

When it comes to litters and droppings, ferrets tend to be very hygienic. They prefer to defecate far away from their eating and sleeping place and won’t poop in an area that’s already soiled or smells.

That’s why it’s important to clean your ferret’s litter pan and replace their litter regularly. Use a litter scooper to remove droppings and urine clumps from their litter box at least once a day. Also, make a habit of completely emptying their litter pan, cleaning it thoroughly, and placing it back in their cage with a fresh batch of litter once every week.

Tips To Stop Your Ferret From Pooping Everywhere

During the litter training process, you have to be patient and consistent to let your ferret get the hang of using their litter. However, they can still have accidents around the house during their training.

To prevent your ferret from pooping around their house both during and after their litter training, use the following techniques and methods:

1. Clean the places where your ferret has pooped

Because ferrets tend to poop in the same place as they did before, it’s important to remove any traces of the droppings after your ferret has had an accident in a particular place.

To do so, thoroughly clean the spot where your ferret has pooped with some cleaning solution or soap. Dry the area and place some scent like bitter apple, peppermint, or orange peel to ward off your ferret and prevent them from defecating in that same spot again.

2. Place food or toys where your ferret usually defecates

Ferrets don’t like to poop in places where there’s food or toys. So place their favorite treats and toys in the corners where you expect them to defecate. This will prevent them from pooping in those spots and using their litter instead.

If you often leave your ferret loose while you’re litter training them, it’s best to have two to three extra litter boxes in the corners of your house where they usually poop. This will further reinforce their behavior and teach your ferret to use their litter specifically for pooping instead of doing it around the house.

Why is my male ferret pooping everywhere?

If your male ferret is specifically pooping everywhere despite having a litter box, it’s likely that their litter box is simply too small. Male ferrets prefer to keep all four feet in the box while pooping, and if they don’t fit, they’ll simply stop using the litter pan and poop elsewhere.

How many times do ferrets poop in a day?

Ferrets typically poop around three to four times a day on average due to their fast metabolism. However, this amount may vary depending on your ferret’s diet.

Yes, ferret poop can contain lots of toxins and bacteria such as salmonella that can be detrimental to human health. Whenever handling ferret poop, remember to wash your hands thoroughly afterward to prevent cross-contamination.

How to clean ferret poop?

Ferret poop can be incredibly difficult to remove when dry, so use a scraper when cleaning off a floor or carpet. Remove the dried clumps and clean the remaining residue with a multi-surface cleaner or some other surface cleaner. Remember to disinfect the surface afterward.

A ferret’s poop is dark brown or blackish and has a long and clumpy appearance. If there’s a change in the appearance of their poop, remember to get them checked by a vet.

2 thoughts on “How to stop Ferrets From Pooping Everywhere?”