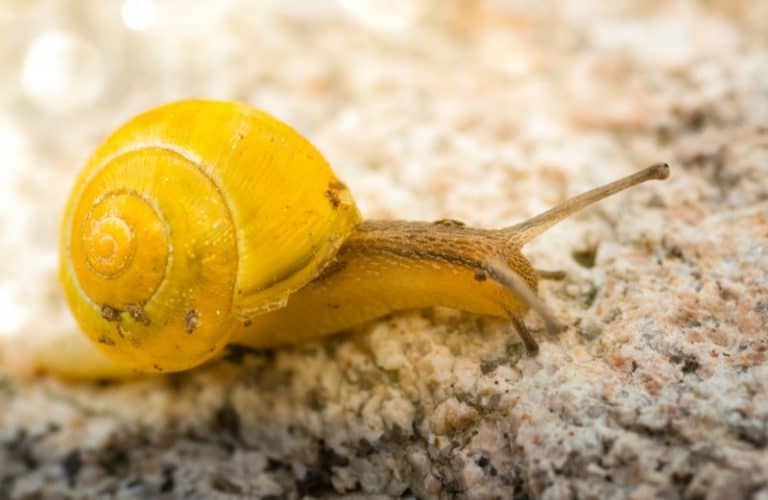 You go to your aquarium one day and notice that your golden snail is floating.

Initially, you think that your snail has died. But upon a closer look, you notice that it’s alive and moving.

So why is your snail floating if it’s alive and well? A snail can float both intentionally and unintentionally for various reasons. Some common explanations include trapped air bubbles, poor water condition, hunger, high filtration speeds, or just a defense mechanism against aggressive fish.

But which one is causing your golden snail to float? And how can you help them sink again?

To find out, keep reading ahead!

Why Do Golden Snails Float On Water?

There are only a couple of reasons why a golden snail floats on water. While most of them are easy to fix, it’s important to identify what caused your snail to float in the first place. Here are some of those reasons listed below:

1. Trapped air in shell or lungs

Snails are notorious for having trouble with air bubbles. In most cases, air bubbles find a way into their shell and get trapped, while on other occasions, their irregular breathing causes air to get stuck inside their lungs. Because snails are extremely lightweight, even a few air bubbles can make them buoyant and carry them to the water surface.

Until those air bubbles are released, your snail is pretty much stuck at the surface. They might also exhibit signs of struggling in this state as if they want to grab onto something. To do this, the snail will stretch out of its shell more than usual.

Like any other sea creature, golden snails are also very sensitive to water parameters. But unlike fish, they can and will attempt to escape the aquarium due to their survival instincts if they deem the water condition unsuitable. In this case, they fill their lungs with air to float to the top and then climb out of the fish tank walls if they can reach it.

If you’re unsure whether the water condition is triggering your golden snail to escape, try to remember their most recent attempt to flee. Was it right after you placed the snail in your aquarium for the first time? Or just after you did a water change? If yes, there’s a great possibility that your water parameters are the culprit.

In most cases, pH and temperature are the parameters responsible for stressing the snail. But excess ammonia, nitrate, and nitrite levels can also cause a similar reaction.

When a fish tank does not receive enough agitation or filtration, the leftover food and waste material decomposes and creates a protein film on the water surface. Snails consider this film a delicacy and intentionally float themselves to the top to snack on it.

If you see your snail floating upside down out of their shell on the water surface, they’re most likely eating the protein film. While the film itself is harmless to snails and other tank inhabitants, it could indicate that your snail is not receiving sufficient food.

Almost everyone is aware of how slowly snails crawl. Sometimes, fish can take advantage of this slow pace and attack the snails. To defend themselves, snails fill their lungs with air and float to the top of the tank.

A snail can float anywhere between a couple of hours to several days in this situation. Once they feel secure, they’ll release the air and try to land in a different location where they are safe from attacks.

While this behavior is typical in most species of snails, it’s an indication that there are not enough hideouts where they can protect themselves. And if the fish bother them too frequently, the snails can die of stress too.

Snails can float intentionally or unintentionally for lots of reasons. But sometimes, they get stuck at the surface and have trouble sinking back. And the main reason why this happens is due to excessive filtration speeds.

An aquarium filter set at full power can generate high-speed currents. If a snail floats to the top of the tank, these currents can spin them around and make them extremely dizzy and disoriented.

Because there’s not much a snail can do in this state, they will stay afloat for several days until they can grab onto something. Only you can help them from the currents, so keep an eye out if your snail exhibits signs of struggling when your filter is running at full power.

6. You snail has died

Even if you’re confident that your snail is alive, there’s still a possibility that they’re floating because they have died. Golden snails usually die due to old age or an extreme change in water parameters. In poor water conditions, they can succumb in as little as a few hours.

The most accurate way to identify whether your snail is dead or not is to remove them from the tank and check if their shell has a foul smell. Try touching a part of the snail’s body and see if they retract back into their shell.

If their shell smells rotten and their body is hanging out of it without movement, chances are that your snail has died. In this case, it’s best to remove them from the aquarium as soon as possible and do a partial water change.

Once you’ve got a rough idea of why your golden snail is floating, it’s time to make some adjustments to your aquarium. Here are some easy fixes you can do yourself so you snail can sink back to the bottom:

Ammonia and nitrite should be at 0 ppm, while nitrate levels should not exceed 10 ppm. Also, make sure that the water’s pH is between 7.2 – 7.5 and temperature is in the range of 68 – 82°F. These are the ideal water parameters for golden snails.

2. Release the air bubbles in your snail’s shell

If a snail accidentally traps air bubbles in its shell, you’ll need to step in and manually release those bubbles so they can get down. To do this, pinch hold your snail from the water surface, turn them upside down, and gently rotate their shell a couple of times.

Repeat the last step four to five times while keeping an eye out for any bubbles coming out of their shell. If some bubbles escape, let go of your snail and see if they can sink back to the bottom. If they can’t, repeat the whole process after a few hours.

Turning down your filter’s speed will also help if your snail has become disoriented from the fast currents. Running your filter on full power also consumes more electricity and can stress your fish, so unless your water is extremely polluted, keep your filter on medium to low speed.

If you suspect that the currents are dazing your snail, you could also help them stick to any surface. Hold them gently and bring them close to the aquarium’s wall or some decoration to which they can attach their feet. Once they’ve latched onto it, you can let them go.

4. Add more food and cover in your tank

Even though snails survive on the fish tank’s waste material, they still need food consistently to survive. If they’re staying afloat to eat the protein film from the surface, it’s a sign that you should pay attention to their diet.

Try adding some leafy greens like lettuce and iceberg, as well as vegetables like carrots, squash, and peas to fulfill your golden snail’s appetite. They’ll complete the remainder of their diet by eating algae and leftover fish food in your tank.

How long do golden snails live?

In normal tank conditions, a golden snail will survive around one year on average. Their lifespan is usually dependent on the quality of the water. And while they’re hardy creatures, a golden snail can still die suddenly after being transferred to a fish tank with unsuitable water parameters.

How long can snails float for?

Snails can float up to several weeks at a time without problems as long as they’re eating. If your snail is stuck due to air bubbles or disorientation, you might have to step in, or your snail will continue to float till they can get help.

How big do golden snails get?

A fully grown golden snail can measure up to 3-inches in diameter. They’re recognized by their bright golden shell and make an excellent, vibrant addition to any fish tank.

How many snails should you keep in a fish tank?

Ideally, you should have 1 snail for every 5 gallons of water in your tank. However, you could have more depending on the number of fish in your tank and the water quality.

Are snails good for fish tanks?

Snails act as natural filters in freshwater aquariums and help improve the water quality. They consume biological waste such as leftover food, algae, and dead plants, reducing your aquarium’s ammonia and nitrite levels. 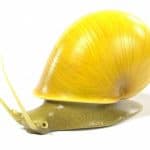 How To Tell If A Mystery Snail Is Male Or Female? 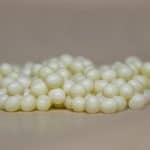 My Mystery Snail Laid a Clutch of Eggs – What to Do? 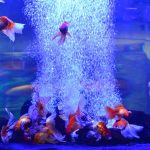 White foamy bubbles covering fish tank – What to do? 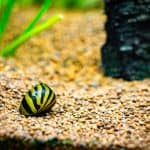 Nerite snails crawling out of water?