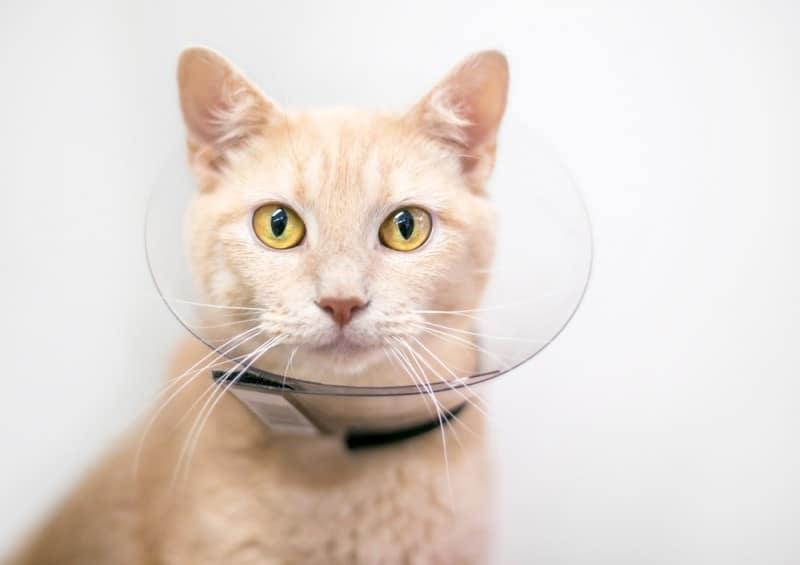 Seeing your cat try to remove the cone can be painful to watch as it gets in the way of a lot of things they usually do.

There are various things you need to know about the cone and these are necessary to know so you can bear the pain of watching your kitty hurt.

So how do you stop your cat from removing there cone?

The answer lies in making your cat comfortable. Because the collar irritates them, you can choose to get them a softer, more comfortable collar. Otherwise, you could also put on a cloth sleeve on your cat that prevents them from touching their wound in any way.

By reading more, your misunderstandings will eventually fade away and it will be easier to take care of the kitty.

What is a cat cone?

In the beginning, you should understand what the cone is. The cat cone is an apparatus with an opening at the front that envelopes the cat’s face. These cones are popular by many names like Elizabethan collars, E-Collars, Buster Collars, and many more. There are many made-up names for them as well which are based on humour such as “cone of shame”, “lampshade”, and “pet radar dish”.

In the old times, the vets used to create their own hand made cones using plastic sheets, or cardboard material to cater to the patients. In today’s world, there are plenty of cones available in the commercial market of various designs, colors, materials, and many more specifications as demanded by the customer.

Why is the kitty in a cone?

The cone is basically suggested by the vet. It prevents the cat from licking or chewing the parts of its body which have been recently undergone surgery or might have stitches.

The cat tends to chew off and remove the stitches on its body that helps them cure. Accidents happen and the cat gets hurt. It can be of any kind which can be a wound, a burn, or any necessary surgery. If any of these happens with a cat, they can’t touch, chew, lick, or scratch those specific parts of their body.

The cone should never be placed on a cat for fun as it is really uncomfortable for the cat to cope up with it. It prevents the cat to even groom itself and it can be hard for the kitty to stay away from cleaning herself and later when the cone is removed the cat could be used to getting herself dirty.

Is the cone necessary?

Many people ask their vet if the cone is really necessary as they can’t see their cat in pain and struggle through basic comfort. The wounds are sprayed and neutered with antibacterial ointments which could be harmful if the cat licks them. In this case, the cone is necessary but if the wound is different, as in the stitches after the surgery. Many cats don’t chew them off but just lick them and its fine.

This can be easily done by observing the kitty’s behavior on the stitches. Is she’s just licking them and not chewing them or pulling it’s totally fine to leave the kitty alone but if she starts to pull them off or chew them you should visit the pet and get the cone for the cat. In case the cat pulls off the stitches they can create an even bigger problem for her and it will be a tough time for the family as well.

How do you stop your cat from removing the cone?

Because the cone is both necessary and needs to be put on at all times, you need to find an alternative.

The second option is to put on a sleeve made out of cloth on their bodies. The purpose of the collar is to prevent your cat from licking or biting the wound. And when they’re wearing a sleeve on their body, it would have the same effect. Except that your cat will be much more comfortable and it won’t reduce her mobility. You could simply cut out holes in a stocking and put them on your cat.

There are many types of cones that come in different sizes and materials which the cat might not resist to wear. If they can provide at least some kind of freedom to the kitty, it isn’t a bad cone as it will also keep the kitty safe and prevent it from doing unwanted things and also be more comfortable for the kitty. Some of these kinds are mentioned below:

The most common and typical kind of cone found anywhere. It is easy to spot because of its round and sturdy shape. It comes in different kinds. Some of them have a softer edge that won’t pin the kitty in the neck area. Plastic cones can also be see-through to help the kitty in better vision and not be cut off from the surrounding. You can also ask your vet to trim and file the length of the cone helping in better vision.

These cones are made of foam and filled with colourful fabric. These are more comfortable for the cat and also protective. There is a possibility the cat would press it against some hard object resulting in it being ruined and ineffective. That’s the caring measure that has to be taken by the owner of the cat is wearing a soft cone.

Some cats really go with the soft fabric cones. These are attached to the cat’s neck with the drawstring that comes with it. The critics say that the best way to use the fabric cone is attaching it to a proper collar as many cats don’t like the attached string to it. It’s disturbing to them as the string can cause discomfort or itchiness at the neck area of the cat.

These are little collars that are inflatable and doughnut-shaped. They are really light in weight and less obstructive which makes them less suitable in various conditions. They can’t help at all times but can work for a few things. These are extremely comfortable and do not make the cat hate them.

The kitty might refuse to walk at all resulting in the prevention of any unnecessary accident or mishap. They would prefer dragging themselves to places or crawl on the floor. Avoid any forced actions on the cat and let them get used to the cone and learn to live with it.

It is necessary to look after your kitty after returning from the vet and putting on the cone. Shrewdly observe the behavior of your kitty and the effectiveness of the cone. Make sure the cone is preventing the kitty from doing unusual activities that are not supposed to be done while the cone is on. The kitty might get her way out of the cone or can also use it to scratch themselves as the hard plastic is helpful to them. Cats can also get stuck in narrow places because of the cone and get themselves hurt.

You need to look out for your kitty while they’re wearing a cone. Your cat might be used to going outside for a walk alone but when there’s a cone, supervision is necessary. Try to stop the kitty from going outside, and keep her inside the house for as long as the cone is on her neck. While the cone is on, she’s prone to mishaps that could happen to her. A cat’s vision and hearing are limited due to the cone in the neck so she can’t protect herself from outside dangers.

The cone can stop the cat from eating or drinking. It can be a little too high and prevent the cat from having a proper meal, and having an improper diet can slow down the healing process of your cat. If you find out that your cat is not having enough food, try to get the length of the cone shortened and allow the kitty to eat properly.

There are various ways to prevent the cat from removing the cone, perhaps by making it a little more comfortable for the kitty. It can be easily done by just observing the behavior changes of your cat after getting the cone. Try to give the kitty maximum attention and better care than before.