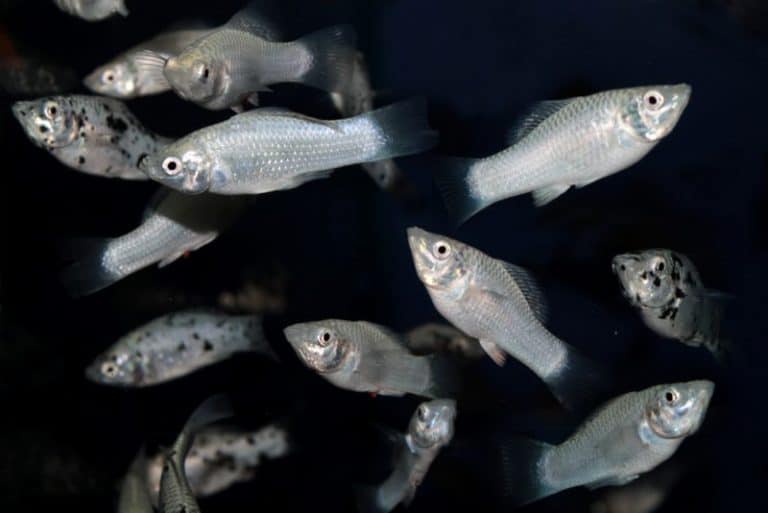 Mollies are a popular aquarium fish. If you have a fish tank with Molly chasing each other, you may wonder, “are mollies aggressive?” Often these ‘catfights’ can cause an owner to worry.

The reasons why Molly fish will chase each other and seem aggressive has to do mostly with mating rituals that involve attention-seeking behavior. This is when a male molly chases a female molly or aggressively fights off the other male mollies in the tank.

Also, much like other animals, male mollies will become territorial and will attempt to defend their interests from the other males in the aquarium. Make sure you have a large enough aquarium to give ample room for your mollies and make sure you have enough females to limit the aggressive behavior.

A male Molly fish will chase a female

Most often, you will find your male Molly chasing a female for the purpose of mating. This is perfectly normal behavior and typically doesn’t cause any harm to either fish. If your mollies are breeding, then you’ll see an uptick in this kind of aggressively chasing other fish. But, don’t be mistaken, Mollies are not typically aggressive, but sometimes you will have an alpha Molly fish that is simply a bully!

If you had all female mollies, then you won’t get to witness this reproductive rite of passage that marks a very important part in the life of both the male and female Molly fish. If you’re wondering if it is mating season for your fish, there are signs that can give you a clue. One sign is this aggressive chasing of female mollies around the tank. Also, if you notice your male mollies splitting up into groups and giving much attention to a female – then they are likely looking for that female to become a mating partner.

Why male mollies fight each other

If you have too many boy mollies, then you’ll likely have a lot of aggression and a lot of fighting. To eliminate male mollies fighting each other, it is advised to have only one male Molly fish for every three females. Also, if you have multiple male mollies, then you want to make sure your fish tank is big enough for these alpha personalities to stake some territory of their own.

Male mollies can become frustrated and simply chase each other out of spite. But sometimes, it is an issue of territory that one male Molly fish is trying to protect. So, depending on whether it is mating season or not, the in-fighting between male Molly fish could be territorial or it can be attention-seeking behavior for the sake of the females.

And yes, it is quite possible that the two fighting, male mollies will leave one dead or severely injured. This is especially true when adding a newbie male to an established tank of Molly fish. It is good advice to not place two male mollies in the same tank with one female Molly fish. They will chase her endlessly in a never-ending attempt to mate.

Why Fish Chase & Fight Each Other (Molly Guppy Cichlid)

Should you separate Mollies?

Actually, this is not a bad idea for a couple of reasons. After the female mollie has given birth to a fry (a recently hatched fish with a yolk-sac that has almost disappeared) other adult mollies will eat their offspring. It is best to separate the pregnant female molly from the rest of the fish right before she’s about to give birth.

To further reduce aggressive behavior in your aquarium tank, you might want to reduce the population if you start having too many mollies in one tank. While mollies are mostly peaceful, they will become very aggressive when crowded, which makes them feel threatened. Talk to your fish store owner about the different species of Mollhyfish and how many you should have in your size aquarium.

For larger mollies, like Sailfins, you’ll want at least a 30-gallon aquarium for up to four mollies to live peacefully together. If you intend to house three or four of the smaller Shortfin mollies, then a 20-gallon tank should suffice.

How to identify your Mollies

There are many Molly fish species that range in color from bright and beautiful red or orange colors to the black-speckled, dalmatian breed and the totally Black Molly Fish or the plump, little Balloon Molly Fish. To get a handle on how many of your mollies are female and how many are male, here are some tell-tale signs to look for.

Traits of a male Molly fish

With the right ratio of male to female mollies, you can have a very colorful aquarium that is also very active. Expect a lot of social engagement and groups or schools of mollies that enjoy swimming together. These fish will choose shoalmates that are predominantly female because males are known to harass and stress females. You may even begin to notice personality differences because Mollies are so interactive.

Molly Fish Care and Breeding: Let’s Clear up All The Confusion!

Which fish are compatible with Mollies?

According to FishKeepingWorld.com, the best fish mates for Molly fish are “Cherry Barbs, Corydoras Catfish, Danios, Dwarf Gourami, Harlequin Rasbora, Platies, Rosy Barbs, Tetras, Yo-yo Loaches, and Zebra Loaches”. Avoid adding other aggressive or larger fish in the same tank because they may attempt to eat the mollies or stress them to the point of death.

But, more than anything, keep your fish tank clean to avoid your fish contacting “molly disease” (or “livebearer disease”, or “shimmies”). While it is not actually a disease, it is caused by poor water conditions and negatively affect the health of you Molly fish. Anytime your fish stop eating or seem to be considerably less active, it may be a sign that you need to change their diet or clean the tank.

Molly fish are compatible with? The mollies are generally social and may not like living in isolation. Besides their own kind, some good tank mates for mollies are swordtails, platies, corydoras catfish, angelfish, and some species of tetras.

What is the gestation period for molly fish? The average gestation time of molly fish is 60 days and may release 10 – 60 fry at the same time. Moreover, the mollies have the ability to store sperms for months and may reproduce every 30 days after the first delivery.