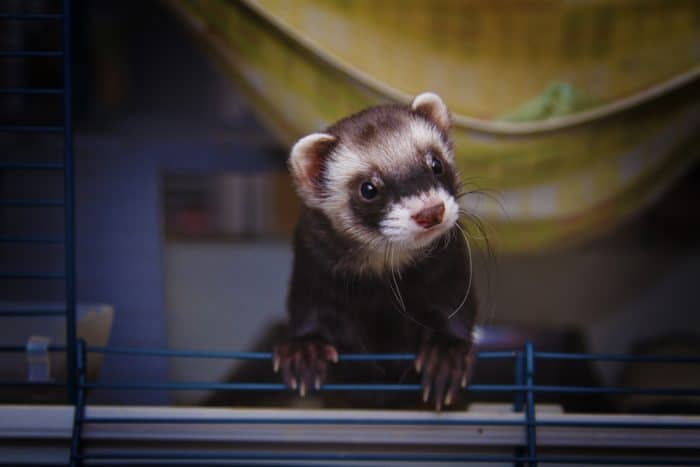 Lights, Camera, Ferrets? Well, these cute furry creatures made ways to entertain us in some famous movies too. Some may not even be aware that the animal featured on these movies were ferrets, so check out this list, FYI!

What are the movies with ferrets in them? Harry Potter and the Goblet of Fire, the Lord of the Rings (Fellowship of the Ring), Starship Troopers, The Golden Compass, Dr. Dolittle 2, Stardust, Garfield: A Tale of Two Kitties, Dream Catcher, Along Came Polly, Mars Attacks!, Ace Ventura, The Big Lebowski, Big Fat Liar, Beastmaster, and Kindergarten Cop.

Ferrets did “invade” and had significant roles in some famous Hollywood films, TV series and even commercials. The roles they were given varied, positively or negatively portrayed from peaceful, playful, and wild.  TV shows include the Beastmaster series, Xena: Warrior Princess, Full House, Hercules, Northern Exposure, Seventh Heaven, Star Trek: Deep Space Nine, 3rd Rock From the Sun, Star Trek: The Next Generation, Golden Girls, and Twin Peaks.

Are the ferret characteristics we see in movies for real?

Well, to tell you frankly, not so much alike with reality! They’re not rats, beavers, or skunks. Instead, they are closely related to badgers and are actually very gentle and lovable as pets.

What You See Is Not Always What It Is!

Ferrets were rarely picked as pets during the 1980s, but since the debut of the very first film featuring them (The Beastmaster, 1982), ferret ownership popularity has heightened to almost a million until 1996 and currently growing through the movie’s commendable success.

They get regarded as “big rats” or “chipmunks” that bite or something, but in reality, these furry “friends” are totally gentle and peaceful as pets.

Most of the time, these furry creatures are regarded as “rats” “beavers” or “raccoons,” though they are actually different from them.

That’s why they sometimes go “unnoticed.” Like in the movie The Lord of the Rings- Fellowship of the Ring. One scene (though too short to catch a viewer’s attention) actually has a ferret sticking its head out of a man’s coat while being fed. It was while the four hobbits Frodo, Sam, Peppin, and Merry were talking to an innkeeper looking for Gandalf. The ferret character was “nameless” just like in the Kindergarten Cop, but at least it did something remarkable when it saved Arnold in the movie.

Lots of other movies also have unnamed characters, like in Ace Ventura (starring Jim Carrey), where he takes cares of various animals in the movie including ferrets as a “pet detective.” But in some fantasy films such as The Golden Compass, the ferret’s character name is Pan. Another is Podo and Kodo in the movie and TV series Beastmaster, and Along Came Polly where the ferret’s character was named Rodolfo. Lastly, as one of the most loved ferrets- featuring films is in the Harry Potter series.

At the end of The Deathly Hallows (part 2), Albus (Jenny and Harry”s son) has a ferret in a bird’s cage, and in The Goblet of Fire, Mad-Eye Moody, a.k.a. Barty Crouch, Jr. turned Draco Malfoy into a ferret.

Whether the movie scenes with ferrets in them are too short to notice them, we can notice them eventually if we know they are in there.

Ferret Attitudes Made Quite Inappropriate in their Movie Roles

Misconceptions about ferrets are taboo, especially if one doesn’t know them too well! They get mistakenly regarded to as other rodents such as raccoons, beavers, or even rats, but they’re actually way too far from those as they are closely related to badgers and the European polecat species.

In some movies, TV series or commercials, they had a nasty, naughty, and scary role portrayals. This can be avoided if the shows have a team of researchers, or ferret experts to educate each one well about proper handling and behavior counseling to at least lessen the misled depiction of such friendly and gentle creatures.

One example would be the movie Inkheart if that was well researched they wouldn’t have let the ferret sound like another “rodent” or the brief cameo in the Big Lebowski where the dude thought the ferret was a marmot!

Reaching its goal for this Christmas season is Santa’s Little Ferrets, the trailer just came out.

Pretty old but the Beast Master’s ferret characters Kodo and Podo has been one of the best reasons people were enlightened and aware that ferrets can be taken and kept as pets. Another on the list is The Golden Compass, very child-friendly and ferret-friendly, and Along Came Polly where there is a free-roaming pet ferret that has a lot of scenes.

Most movies with ferrets and other animals are done to attract children to become a pet and, so this kind of promotion is actually very helpful for one’s well-being and awareness towards issues in the environment and keeping animals for pets.

These movies are made “fun” to promote choosing sociable pets to keep. So to boost the interest for ferrets, choose to watch not just funny and nature-oriented movies or TV shows, but also consider some documentaries that can help educate you about their proper care and handling to help you out upon deciding to keep ferrets as your family pet.

Eye-Opener to take Ferrets for Pets

In the 1980s, ferrets weren’t as popularly picked as pets. But during the release of The Beast Master in 1982, viewers’ and pet owners’ points of view about ferrets had a drastic change.

The film is about a child stolen from his mother’s womb by a witch and eventually grows into the main character Dar, who has the ability to communicate telepathically with animals.

It has been an eye-opener for taking care of our environment and animals alike, including ferrets as they should be considered a part of this planet and that they can play a great role in our lives as “friends.” Although fictional, this movie novel had two more sequels and a chronicled TV series showing the further adventures of Dar and his animal friends (including Kodo and Podo, the ferret characters).

Ferrets can live 6 to 10, or even up to 13 years if taken good care of. Aside from giving them high-quality protein and fat-rich diet regularly, it is necessary to bring them to veterinary check-ups and vaccination to keep them overall healthy. Let them undergo preventive treatments for fleas, heartworm, canine distemper, and rabies.

Design their cages with two levels and a place to hang a cozy hammock or a dark enclosure made of wood or any material covered with towels or thick fabric where they can comfortably nest to sleep. They also need litter boxes, one inside the cage and another for playing outside.

They can sleep for up to 18 hours a day, but when they are awake and start bouncing back and forth baring their teeth and looking quite ferocious or puffing up, wagging their tails and make giggling sounds, they are actually inviting you to play with them. They can play rough but not violently, and they learn to be careful with us humans if we yell when we get nipped. A firmly uttered “no!” is actually understandable to them.

Are Ferrets naughty and nasty as shown in some films? Actually no, because they are smart, friendly, and they are perfect to get as pets because they are low-maintenance, cute, lovable, and they just often sleep a lot showing that they are “generally peaceful.”

Do Ferrets bite? Not really, unless they are very threatened. Once your ferret bites you, it is basically a result of your fault or carelessness in handling them.

Do Ferrets recognize their owners? Yes, they are social animals, and they can easily get along with the owner family just like other pets like dogs, cats, and others do making them clingy and well-bonded pets with their keepers.

Can ferrets get along well with other pets? It depends on their training and bondage with the other pets. But of course, they are still animals and might get back to their prey instincts anytime instead of befriending the others. Be extra careful when letting them mingle with your other pets, especially smaller ones!

Is it a better mouse-hunter than a cat? Equally, yes. Ferrets are strictly carnivorous when it comes to diet as their system can only digest meat. So they are useful for rodent pest control, sometimes even more effective than a big, fat, lazy cat!