I was relaxing and watching my colorful fish swim about in their glass aquarium when a baseball hit one of my windows, shattering it all over the floor. This startling event led me to wonder just what would happen to my fish if the glass were to break in their aquarium, and what I might do about it. I did some research to learn more about this potentially disastrous situation.

What does happen if the glass breaks in an aquarium?

That will depend on how bad is the break. If a pane of glass shatters, it’s likely that all of the contents, including water and fish, will spill out. However, if the break is just a crack or is up high enough, it’s possible that some of the water may leak out but the fish could survive the event if enough water remains in the aquarium.

While broken glass in an aquarium can spell disaster, it doesn’t have to be that way. Such accidents are not very common, and there are things that can be done that will help to prevent the glass from breaking and to protect the fish inside in the event that it happens to your tank. A few simple precautions can go a long way toward averting disaster, though not all accidents can be prevented.

When the Worst Happens

It can happen that an entire side of an aquarium will break and the glass will end up completely shattered. This is usually limited to one side of the aquarium and is typically caused by an accident.

When this type of breakage occurs, all of the water is going to spill out of the aquarium, bringing the contents with it, including fish, plants, and ornaments. Such accidents are usually caused by external events such as something being banged into the aquarium hard enough to break the glass.

Breakage can also result from the aquarium being knocked over, falling from a stand onto the floor. If someone is there when this happens it may be possible to rescue the fish by getting them into water immediately, placing them into non-chlorinated water in a glass, pitcher, bowl, or other containers.

If no one is around when the glass breaks, such as during an earthquake or other event, the contents are likely to end up on the floor and the fish will die. The floor area around the tank will be saturated, and if there are electrical outlets near the tank they may end up getting water in them.

This can be quite dangerous, as water and electricity are not a good combination and there can be a risk of fire at the worst or blown fuses and damaged outlets in the best case. The amount of damage caused when the glass breaks in an aquarium will depend on how large the tank is.

A 10-gallon tank will not create the same amount of damage as a 100-gallon tank. Since there is less water the size of the area flooded will be smaller with the smaller tank and the damage to floors and furniture will also most likely be much less.

However, since any type of water spill has the potential to start mold growing, it’s important to get the area clean and dry as soon as possible.

How often do fish tanks break? Fortunately, they don’t break very often. A tank may be set up for many years and never have a glass break. It is not typical for the glass in an aquarium to suddenly break on its own, nor is such an event likely to be caused by the tank’s residents. If a tank does start leaking, it is most often caused by the failure of the tank’s sealant, and the leak will usually be limited to water dripping out of a corner of the tank or running out of the bottom edge. Although a bad leak can cause the tank to drain fairly quickly, most often such leaks begin slowly and it’s possible to repair them before a disaster occurs. The tank’s glass typically will only break if something from the outside hits it, such as when a lamp or other object is knocked into the outside of the tank or the tank is bumped and it falls. However, other things, such as poor tank construction, a tank that is not level, or other construction or setup defects can also cause the glass to break.

To determine how to prevent aquarium breaking, it’s important to follow a few guidelines. First of all, be sure to purchase a good-quality tank. A cheap tank may also be a poorly-made tank, mass-produced using inferior materials and construction standards. If the tank is not made well it is at an increased risk of having the glass break when the weight of water is added to it. The next important step in preventing the glass breaking in an aquarium is to be sure to install the tank correctly. While proper installation is important for any aquarium, the bigger the tank, the more important this becomes because of the weight. The tank must be level, and this generally means that the stand it’s on must be level as well, and it must be set in an area where the floor is level and doesn’t slope or have any other irregularities. A tank that is set up correctly will have its weight distributed evenly, meaning that no single part of the aquarium takes on more strain than any other, so the glass is less likely to break from uneven weight distribution. An appropriate stand is also important, as one that is wobbly or too small for the tank may tip over and then the glass would almost certainly break.

Another important way to prevent an aquarium from breaking is to keep things away from it that might be bumped into it, breaking the glass from the outside. Lamps, televisions, game consoles, or anything else that could easily be bumped into the outside of the tank should be kept far enough away from the aquarium that these items are unlikely to hit the aquarium if they are knocked over since anything banging into the glass from the outside could cause it to break.

One of the easiest ways to do avoid aquarium glass breaking is to select an aquarium that is made from something other than glass. The most common material used is tough but lightweight acrylic. Acrylic aquariums have the advantage of being much lighter than glass, and a properly made acrylic aquarium is much harder to break than one made of glass. This doesn’t mean that they can’t be broken, as a hard blow to an acrylic tank can still cause a crack or even lead to a full pane breaking out, but it typically takes a lot more to break such a tank. However, on the downside acrylic tanks are a bit easier to scratch, so care must be taken when cleaning them, as activities such as removing algae with a scrubbing pad or a scraper can cause permanent damage to the inside of the tank. This can cause degradation to the inside of the aquarium and interfere with how well the contents of the tank can be seen. Algae and other things can also grow in the scratched areas, degrading the appearance even further. Still, if care is taken when cleaning the tank scratches can be avoided and an acrylic aquarium can provide many years of trouble-free service and enjoyment.

How long can an aquarium last?

An aquarium can last indefinitely, if it is maintained and well cared for. Keep it clean and filled, because drying out can be a source of trouble with the joining compound used to hold the tank together.

Are big aquariums more likely to break than small ones?

Will scratches make a tank more susceptible to breaking?

Most scratches on a fish tank are cosmetic and are not deep enough to weaken the glass. If an aquarium should happen to sustain a deep scratch that is affecting the structural integrity, it should be repaired or replaced.

Do aquariums have to be filled with water?

An aquarium does not have to be filled to the top with water in all cases. Many people use them with little or no water as habitats for reptiles, plants, or animals that need access to the air.

How can you tell if an aquarium is well-made?

The best way for the average person to determine if they are buying a well-made aquarium is to purchase it from a reputable dealer. The larger the tank, the more important this is. Don’t be afraid to ask questions about guarantees on the tank and recommendations for quality brands. 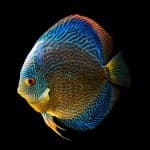 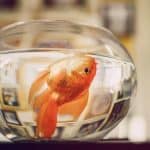 Are there health risks to leaving a dead fish in the aquarium?

Is Distilled Water Safe For A Fish Tank?