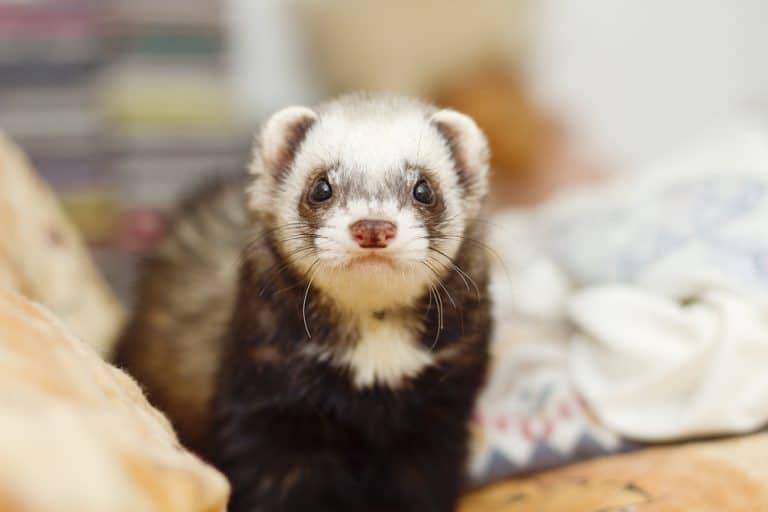 Ferrets are some of the most popular exotic pets in the world. They are small, furry creatures with a cone-shaped nose, long claws, and a pear-shaped body with short legs. Ferrets are related to wolverines, minks, ermines, and weasels in the Mustela genus. They are controversial animals and are illegal to keep as pets in many states and countries.

They are banned in California, Washington DC, Hawaii, and New York City. Plus, they are illegal in countries like New Zealand, South Africa, Puerto Rico, and Portugal. On the other hand, they are popular in Japan and Taiwan.

Check your local laws and regulations before you adopt a ferret.

Why Are Ferrets Illegal

There are many reasons argued for why ferrets are illegal. These include concerns about aggression, biting, and how they can colonize if they run away. The colonization can threaten native wildlife, which is why ferrets are banned in many countries.

Ferrets are high maintenance pets and require intensive care. Many people describe it as caring for a toddler! If they are not taken care of or provided with ample room, bedding, and enrichment, they can become destructive. These animals can also revert to their feral state, and become a carrier of rabies.

Many people also have a negative opinion of ferrets. As with other exotic pets, some bad press has hurt their reputation.

Most states in the United States allow ferrets as pets, but some states have laws prohibiting ferret ownership. It’s best to check with your state to confirm the laws.

As with many other ‘exotic’ animals such as snakes, your local laws may be stricter than state laws, and regulations may change. It’s a good idea to obtain new information from your local government or an animal control board.

It is illegal to sell, import, and transport ferrets in California. You need a permit from the California Department of Fish and Game to keep ferrets as pets. You can get a permit for medical research and other unique circumstances and not for home possession. This ban stems from fears that escaped ferrets could colonize wild populations and upset the area’s delicate ecosystem balance.

Hawaii is another state banning the ownership of ferrets. Ferrets are illegal because they could easily revert to their feral state and be a potential carrier of rabies. Hawaii is free from this disease, and they want to keep it that way!

Fact: Hawaii is the only state free of rabies because they have strict quarantine laws.

In Hawaii, housing a ferret comes with a hefty price. You can face penalties of up to four years in prison and a $200,000 fine if caught owning a ferret! However, in-state ferret owners can turn in their pet to the Hawaii Department of Agriculture (HDOA) without prosecution fears.

Ferrets are not a part of this list. The regulations regarding ferret ownership are not as strict as the regulations in other states. You can keep a ferret, but you need to get a permit from the District of Columbia Health Department. So, adopting a ferret in Washington DC is not impossible, but it isn’t easy.

Ferrets look much like weasels, so most people have this vicious idea of them in their heads. Ferrets never attack until they are abused or malnourished.

All five boroughs of New York City (Brooklyn, Manhattan, The Bronx, Queens & Staten Island) ban ferrets, but they are legal throughout the state. In 1999, Mayor Rudolph Giuliani banned ferrets, regarding them as vicious relatives to weasels that pose health risks to people living in densely populated areas.

Ferrets are legal in Georgia and Illinois, and you do not need a permit to adopt a ferret. However, you need a special permit to breed ferrets. Ferrets used to be illegal in Dallas, but now you just need to abide by the vaccination codes while keeping a ferret. Ferrets as pets are legal in Wisconsin; however, the legality may change by the municipality. For example, the city of Oshkosh classifies ferrets as wild animals, and you cannot buy one within city limits.

Portugal is the only European country where having a ferret is illegal. The cops will arrest you if they see with you a ferret. The officials do not actively search for ferrets with people, but it is a big problem. You cannot take your ferret outside, walk them, or take the poor creature to the vet. The only reason that ferrets are illegal in Portugal is that you cannot use them for hunting. Many activists in Portugal strive to make ferrets legal with little or no success.

Ferrets are illegal in New Zealand. The reason for the ferret ban is the unique nature of the New Zealand wildlife population. Many birds are on the verge of extinction, and ferrets are contributing to the decline. According to the Department of Conservation, ferrets (along with weasels and stoats) infiltrated the wild in New Zealand over a hundred years ago. The native wildlife, such as the kakapo and kiwi, can’t cope with these new predators. Also, ferret fur-farming became popular in the last century, and escapees from these farms contributed to their wild population. Ferrets are now illegal in New Zealand because they pose a threat to native wildlife.

Ferrets are illegal in the Northern Territory. The reasons include anger of feral colonies erupting, ferrets spreading disease, biting humans, and their hostile nature.

Ferrets are illegal in Queensland, and the laws are very similar to New Zealand. The difference between New Zealand and Australia is that Australia’s climate is hotter and is not ideal for ferrets. Plus, many predators can feed on ferrets in the wild such as foxes and dingos. Australia has feral dogs and cats, and adding a ferret to the mix is a huge risk.

Ferrets are not illegal here, but you have to prove to the authorities that your pet is a ferret and not a weasel. Ferrets are legal in Western Australia, but their close cousins are not.

Keeping ferrets is legal in NSW, but you have to follow the rules. For example, one household can only have two ferrets.

Ferrets are legal in Victoria, but you need to follow some requirements. You need to spay or neuter your ferret. Plus, there are strict regulations regarding the number of ferrets allowed per household.

Ferrets in the Australian Capital Territory are legal, but you need to register your ferret and get a license. You also need to follow the Animal Welfare Code of Practice and meet all their requirements.

Ferrets are not illegal in South Africa, but you need to meet certain criteria. You also need a permit to keep a ferret as a house pet. According to the National Environmental Management Biodiversity(NEMB), ferrets are a highly invasive species.

You need a permit to import ferrets from the Canadian Food Inspection Agency Animal Health Office. You also require a vaccination certificate from a vet. Ferrets that are less than 3 months old are not subject to import restrictions of any kind.

You cannot import ferrets to Australia.

The UK allows the legal import of ferrets under the EU’s pets travel scheme. You must vaccinate the ferret against rabies.

Additionally, you must treat them for tapeworms and ticks 48-hours before they enter. Ferrets should enter via an authorized route and live under quarantine for six months upon arrival.

Ferrets can travel freely within the EU under the pet passport scheme. All you need is a European Union Pets passport and an identification microchip. Most countries require a distemper vaccine and treatment of fleas and ticks before the ferrets enter. Many government websites have additional travel information available.

Most people have a negative idea of ferrets. Perhaps it is their appearance since they resemble weasels. As with some other exotic pets, some bad media coverage has hurt their reputation.

It all boils down to responsible pet ownership. Owners must provide ferrets with proper training, care, safety, and supervision. They should also have vaccinations for distemper and rabies (ferret approved vaccines). Ferrets are not low maintenance pets and require attention and training to prevent behavior problems. Most ferret owners will tell you they do not deserve the poor reputation because they are wonderful pets! They also don’t deserve to be banned.

Ferrets make great pets for people who have the time for them and who bond with animals. Ferrets are naturally quiet, curious, friendly, intelligent, and affectionate.

Ferrets can make excellent pets, but they can carry germs and make people sick. Experts don’t recommend ferrets for homes with children under five years of age.

Ferrets may bite because of pain, but they may also bite to get your attention. When owners are busy and the ferret wants to play, it is common for them to nip their feet or ankles. Gentle play-biting is typical for ferrets. It is when the ferret bites hard that something is wrong.

Ferrets are higher maintenance pets than either cats or dogs and require an owner who is willing to give a lot of time and attention. They need several hours of supervised exercise and play outside of their cage each day and can be quite mischievous and destructive.

What can Ferrets eat?

Ferrets are obligate carnivores. They prey upon and eat whole animals in the wild. Their diet consists of raw meat, raw bones, muscle tissue, and digested vegetable matter. Domesticated ferrets require a diet of animal products that are high in protein and fat and low in carbohydrates and fiber. 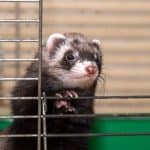 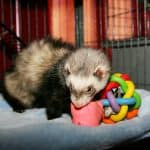 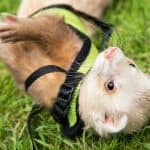 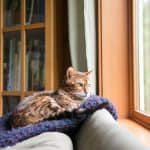