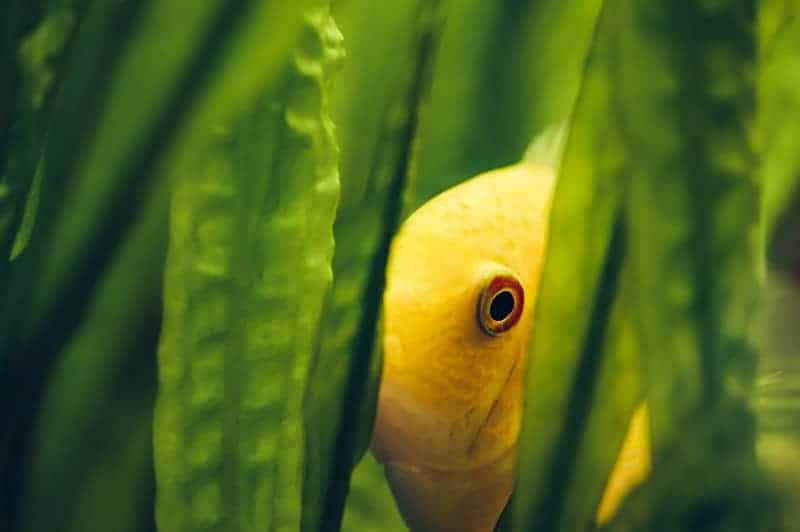 Has it been a while since your fish was active?

Does it bother you that the fun, loving, and active fish of yours is not anywhere to be seen?

Of course, it does bother you and rightly so. It is normal for your fish to not swim as often as it used to, and there are several reasons for that.

The main reason why your fish doesn’t go around swimming or is not that active anymore is that it is stressed out.  But, this is completely normal and has probably happened to every person that has a fish.

By the way, there are several reasons as to why your fish is not as active as before. These reasons are easy to understand and work on.

Your Fish Is Scared

To begin with, if you recently bought home a new fish, it is natural for it to be scared and not come out from hiding.

Or if it just doesn’t swim at all, which is something fish are not known for.

Therefore, you have to take some steps to make your fish feel comfortable with your presence.

Here is what you can do:

Your Fish Is Intimidated

According to a news source, fish can be intimidated by their reflection. This is nothing new since a lot of animals have this feature.

But, there might be a possibility that the reason why your fish isn’t as active as before or not swimming is because it is intimidated by you or its reflection.

As weird as this sound, it is probably true.

Signs that your fish is intimidated by you:

Sometimes, it is naturally fish behavior to hide in their tanks when they see you. Pleco fish is known for hiding when their owner passes by the tank.

How can you make your presence less intimidating?

This is quite simple, actually.

Just put your finger in the water when you are feeding your fish. This will generate a sense of familiarity as food is the main source of interaction between you two and hence make them more comfortable.

Compared to other problems, this one can be a little difficult to deal with. Swim Bladder Disorder is a common problem among fish according to Wikipedia, but this doesn’t make it any less concerning.

This problem is more of a permanent disability that is mainly faced by goldfish, but other fish aren’t immune to it.

So, what happens in swim bladder disorder is that swim bladder organ of the fish which helps the fish to swim and maintain balance in the water is deeply affected.

This can happen due to numerous reasons.

The common reasons include:

Your fish will have difficulty in swimming and thus will end up at the bottom of the tank. It will also try to swim, but its weight will hold it back, which makes your fish swim at an odd angle.

How To Treat Swim Bladder Disorder In Your Fish

The next question that arises is “What to do if my fish has Swim Bladder Disorder?”

But, is this disease or disorder even curable? Is it wise to see a vet for this problem?

Probably not because this disease, as said earlier, is a “disorder”. This means that your fish is physically disabled now.

The only way you can help your fish now is by helping it lose weight.

According to this website, your fish may not respond to treatments but there is no harm in trying.

There are a few things you can try before losing hope.

If these methods don’t work, then it’s best to prepare yourself for the ultimate demise.

There are ways you can prevent this disorder from taking your fish’s life away in the first place.

You can feed your fish limited amount of food, and that is the only way to prevent this. If this disorder comes as a birth defect, then there is so much you can do trying to control its weight.

Fighting With Other Fish

Having an aquarium full of fish must be fun and beautiful to look at, but there can’t be two peas in a pod. This has never gone down well, and this is probably the reason your fish is acting so strange lately.

There is nothing to panic about if the fish are of the opposite gender as they are just trying to mate, but if there are fish of different species in the pond, then fights are bound to happen.

And these fights can scare your fish to the point of hiding.

Split fins are a dead giveaway of a fight in the aquarium. You can’t watch your fish 24/7, and it is hard to tell whether your fish are fighting or playing, it took me a while to notice the difference.

You see, when different species of fish live in the same aquarium, some rules are set.

If another fish swims by, then the alpha fish of the other group sees it as a potential threat, and thus, the fight begins. This fight traumatizes the other fish and it eventually ends up being inactive and not swimming.

Although many people will suggest you let it be when things rough, it is best to separate the fish. Fish of the same species should have been bought when consider keeping fish.

How Do I De-stress My Fish?

If your fish is not getting into fights, then it means it is much stressed and hence not swimming. Now, it is your responsibility to make sure that your fish is stress-free.

Some useful tips are:

After a while, your fish will most probably be comfortable with its new home and be more active by swimming.

What is the lifespan of an average Goldfish?

A well taken care of goldfish can easily live up to 7 to 9 years.  Other factors like feed, environment, and water tank also count.

Can I spot an aggressive fish from far?

It is hard to tell just by looking at the fish, whether it is aggressive or not. At some point in life, all fish show aggressive behavior as it is a natural emotion.