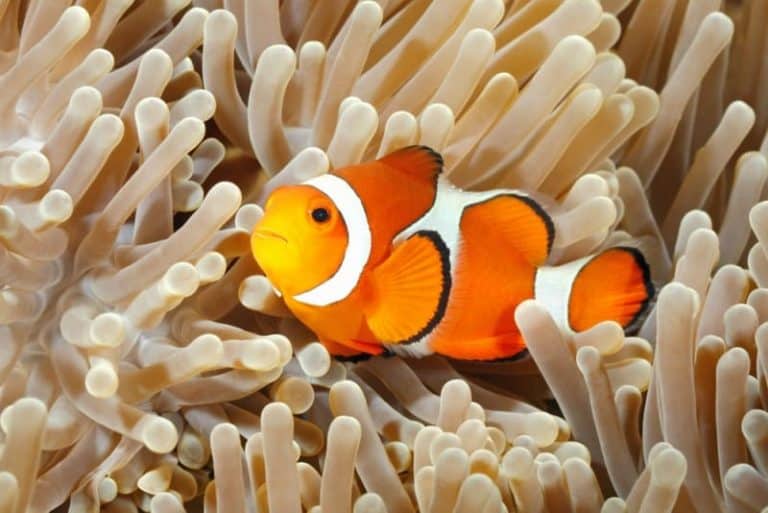 If you’re looking for a straightforward answer to that question, it would be a resounding no.

Fish have different anatomy than humans. And menstruation is a mammalian phenomenon. Their reproductive system and breeding habits are entirely different.

Do Fish Have Periods? Which Fish Have Menstrual Cycles? No, Fish do not have periods. Fish go through spawning, which means that they carry their eggs, and if the eggs are not fertilized, they just release them, and other fish eat them.

Their breeding method is called ‘spawning’. It’s a phase that every female fish experiences to carry and lay eggs. These eggs can be fertilized internally and externally. Unfortunately, there’s no guarantee that all the eggs will be fertilized by the male fish.

Have more questions about fish breeding?

Let’s buckle it down and learn about spawning and fish reproduction.

Menstruation is a part of a female’s reproductive cycle. As a response to reproductive hormones – progesterone and estrogen – every month, a woman’s body prepares for pregnancy.

For menstruation, the endometrium (the inner lining of the womb) prepares for an embryo to implant in it. It thickens the endometrium, creates multiple layers, and develop an extensive network of blood vessels.

If the woman is sexually inactive or does not want to get pregnant, her progesterone levels begin to decline. The blood vessels that have formed thick tissues on the endometrium also begin to slough off. These tissues are then released through the vagina, causing the bleeding to occur. This process is menstruation.

In simple words, menstruation occurs when the egg is not fertilized or does not attach itself to the uterine wall. The lining is then shed, which was established to receive the egg.

For fish, this phenomenon is completely different. Without the periods, fish tend to release the unfertilized eggs, even if the fertilization was supposed to occur internally. We will get into more detail on this later in the article.

Spawning occurs when the eggs and sperm are released or deposited into water by aquatic animals. The word ‘spawn’ refers to the process of releasing both sperm and eggs. This act is carried out by both the sexes and is called spawning. Most aquatic creatures, except for reptiles and aquatic mammals, reproduce through the spawning process.

Spawn consists of gametes, which is the reproductive cell of most fish and other aquatic animals. Some of these reproductive cells will be fertilized and produce fry. The process typically involves female fish to release unfertilized eggs (also known as ova) into the water. Ova are often released in large quantities. The process also involves a male fish sequentially or simultaneously release sperm (also known as milt) to fertilize the ova.

Other than fish, other aquatic animals such as crabs, shrimps, squid, oysters, sea cucumbers, sea urchins, newts, frogs, corals, mosquitoes, and mayflies, also reproduce by spawning.  However, there are variations in the way spawning occurs. This depends on the type of aquatic animal in question and their specific sexual anatomy.

In simple words, most fish species will have a female laying eggs and then a male fish releasing sperm over them to fertilize the egg.

Check out the video below to see how the spawning occurs:

Fish Reproduction – Everything You Want to Know

So how is that a fish can lay eggs without menstruation?

As explained earlier, the sexual anatomy and breeding habits of fish are different. They lay eggs at the spawning stage. The freshwater and shore fish will lay eggs at the bottom or on plants. Most eggs stick to the surface while others remain suspended in open water.

Mostly, these eggs are in huge quantities because only a few fertilize and tend to survive. Other eggs become the meal for other fish. Unfortunately, the mortality rate of young fish and eggs is very high, with only a few surviving out of the hundreds.

The role of a male fish in breeding is releasing the sperm to fertilize the eggs. This milky white substance is also called milt. The milt is present in the male fish in their testes within their body cavity. In stingrays and sharks, the cavity is present at the end of digestive tract to release the milt. These fish play a bigger role by using their pelvic fins to carry the milt to fertilize the eggs.

Some fish have two ovaries while others only one. These eggs are developed in the ovaries. When your fish reaches the spawning stage (covered later in the article), these eggs go to the urogenital opening and are released before they start to develop. While most fish will lay eggs, around a dozen sharks, rays, skates, and bony fish species will bear live young.

Some bony fish do not release the egg. Instead, they let them develop inside and will give birth to fries once the eggs hatch. Fish that bear fries provide their young ones with the nourishment from their own ovarian tissues upon hatching.

There are four basic mating systems for fish. Let’s take a look at each:

In this mating system, one male exclusively mates with one female. The phenomenon is also commonly known as pair spawning. Naturally, most fish are not monogamous, and if they are, they often alternative their behaviors as non-monogamous.

This mating method becomes more common when breeding and feeding grounds are small. It can make it difficult for fish to find potential partners. Monogamy also occurs when both male and female fish is looking after the young. Cutthroat trout and many tropical cichlids are monogamous as they are fiercely defendant against predators and competitors.

This mating system occurs when a male has exclusive mating rights with multiple females. In this system, it is usually a large male that can attract females by defending a breeding side or females from other males.

Polyandry is exactly the opposite of polygyny. In this system, the female can mate with multiple males. This is common among clownfish as they can change their sex. It can also occur in instances when the males cannot handle breeding all the eggs the female produce.

Polygynandry occurs when multiple females indiscriminately mate with multiple males. This approach is more common in spawning animals and is considered the original mating system for fish. In this system, fish form huge mating shoals in shallow water, making it milky with the sperm. On the bottom are millions of eggs that are simultaneously fertilized.

There are three different types of reproduction methods in fish.

This is a type of reproduction that we have been referring to in this article. This method involves the reproductive gametes of both sexes – the egg and the sperm. In this method, two parents – a male and a female – will be involved to fertilize the egg.

There are two ways to fertilize the eggs – externally and internally. It depends on the type of fish in question. After the eggs are fertilized, the zygote is developed as a genetic fusion of both the parents. Almost every animal breeds through sexual reproduction.

While this type of reproduction is rare in fish, it is practiced in various aquatic animals, microorganisms, and plants. Many invertebrates reproduce with the asexual method of reproduction. In this type, the development of the new individual occurs from a single parent. The process doesn’t involve the formation of eggs or fertilizing them with sperm. This means an animal can still breed without a partner.

Aquatic creatures like coral and starfish reproduce via asexual reproduction. Starfish can develop a new being from a fragment of their own body while coral growls small buds, separated into individual organisms later.

Want to witness a coral spawning? Check out this video:

Fish develop a live young without the fertilization process. In parthenogenesis, the female fish requires mating, and the male has to release the sperm but only to incite the development of eggs. The male doesn’t participate in the heredity. This sexual method is common in tropical fish such as Amazon molly. They bear live young, which is always female.

Often used for young female fish that are sexually immature. They have small, threadlike, translucent ovaries not capable of laying eggs.

The ovaries begin to grow and thicken. They now occupy half of the fish body cavity.

The weight and the volume of the ovaries increase as well. The ovaries are deep yellow in color and occupy around 2/3 to ¾ of the fish body cavity.

This phase is also called the pre-spawning phase. The ovaries grow even further, covering most of the body cavity. The blood supply to the ovaries also increases and the fish has started to develop the eggs. Her belly would appear rounder but the eggs won’t be released until the spawning phase.

At this stage, the ovaries cover the body cavity entirely and the fish grows in size. The ovaries carry a lot of eggs. Once the eggs enter the oviduct, the fish will spawn a number of times, releasing the eggs.

After laying the eggs, the ovaries will shrink back to its original state, almost sac-like. The blood supply is also reduced. However, there can be some small or unspawned eggs left in the ovaries at this stage.

With all methods explained, it is now clearer why fish do not have periods. Such reproductive methods are unique to fish and definitely like that of other mammals or humans.

Does fish give birth through the mouth?

In some species, the male fish puts the fertilized eggs in his mouth and keep them there until hatching. Sometimes, the female will do this task, or they would trade-off between them. The fry is released from the mouth upon hatching.

Do fish hide when they’re pregnant?

It is prevalent for pregnant fish to go into hiding or spend more time exploring decorations and plants in the aquarium. This also indicates that the female is looking for a place to lay eggs.

While some fish may look after their young ones, the fry doesn’t need any maternal care. They can find food on their own. 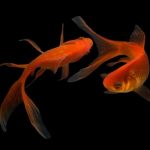 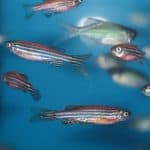 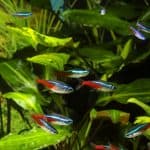