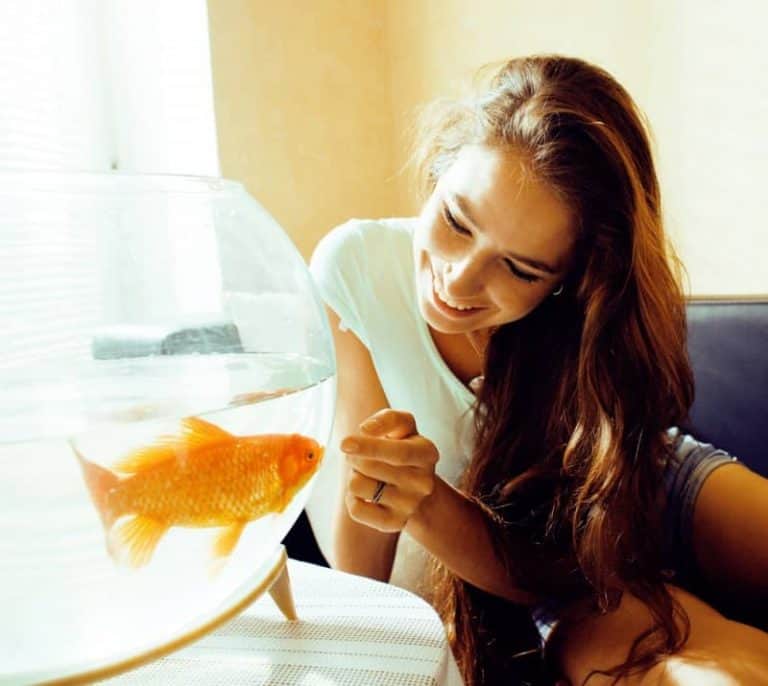 I love to see my fish playing around. When I come closer, they gather around, and when I move, they swim with me. Seeing their affection with me, I sometimes want to pet them, so that they can also know how much I love them. Sometimes, I do caress them, but I really wonder how they feel while I pet them? Do fish really like being petted? And if yes, then would it be for only one person or they’ll like to be petted by anyone and everyone? To get answers to these questions, I asked many people and did my own research as well. And what I found out left me open-mouthed for a while.

Do you also want to know how fish like being petted? And do they recognize their owners? Here’s the kicker:

Yes, some fish like to be petted. But the petting should be gentle. You should consider a few precautions and then you’re good to go. And yes, fish recognize their owners. They bond with them as well, but obviously, not like pet cats and dogs.

So, next time, if someone says you’re as smart as a fish, take it as a compliment. Fish are actually smarter than we think.

I’m sure, you want to know more about how you should caress them. And how to make a bond with your fish? Read below and find answers to all your questions.

Any animal who lives with humans mostly enjoys the company of their owners and like to be touched. The pet makes them feel loved, and they bond with their owners. But what do you think about a fish? Fish and humans live in totally different habitats. Do you think fish would like your pet or not? Here’s the answer.

Yes, some fish like being petted. There are more than 33000 species of fish. So, of course, not all fish (like sharks) like to be touched and caressed. Some fish, like groupers, really enjoy being petted.

Fish like to be caressed gently. They can even get used to it and can come up to be petted.

How to pet a fish?

It’s not that there are rules for that. But there are certain do’s and don’ts that go like this:

Always wash your hands first. Your hands should be disinfected. If you don’t wash your hands, and germs are dissolved in the tank, then fish can get infected as they’ll use that water for breathing.

Once your hands are clean, then hold the fish very gently. Don’t put pressure on it, as fish don’t like it. They’ll be happy if you hold them very lightly.

Now, pet your fish in a very gentle way. The petting should be slow and not harsh.

While petting, talk to your fish and give them a pellet or two of food when you’re done. Giving them food afterward would make them feel that they’ve done something good. They will wait for this petting then.

What NOT to do when you’re petting a fish?

You shouldn’t pet it harshly. Make sure that you’re gentle enough that its slimy upper skin layer remains intact. If in case, that layer is damaged, your fish would be prone to many infections.

If your fish feel stressed or aggressive when you pet it, just stop. Either your fish doesn’t like to be petted, or your pet is slightly harsh on them. You can figure out the reason, but don’t pet them if they feel stressed out after petting.

How often should you pet your fish?

Again, there isn’t a hard and fast rule for it, but you shouldn’t pet your fish too much. Fish like it when you do it after days. They aren’t like cats and dogs that want pets every now and then. So, they don’t “need” to be petted daily. Firstly, make sure that your fish enjoyed the pet, and then you can do it after a few days.

Waiting for some days is also necessary, as you’ll see if your fish has caught any infection from your hands. You should also see if the outer layer is intact, as that layer can be damaged with your pet.

The outer slimy layer keeps the infections away from the fish.

So, some fish really enjoy petting, but your pet should be gentle and your hands very clean. Make sure your fish feel happy when you pet it. If your fish feels stressed or aggressive, then don’t pet it. Probably, it doesn’t like petting or you aren’t petting in the right way.

Do fish recognize their owners?

My lab recognizes me, and it’s not surprising. Many pet animals recognize their owners and have a special bond with them. But what about a fish?

Yes, fish recognize their owners. Fish have the ability to see you and remember you. Although a fish has a very small and simple brain structure, and it seems impossible, but they do! They can identify and remember patterns, and on this basis, we can say that fishes are smarter than we think.

Every human face has two eyes, a nose, and lips. We recognize each other by remembering subtle differences. But fish’s brain isn’t that complex. Still, it records the patterns and remembers them. It’s quite a big deal that fish living in water not only watch you but also remember you.

This fact is also established through studies and experimentation that show fish recognize a human face, and can also differentiate between two faces.

In this study, the scientists chose Archerfish, to see whether it remembers and recognizes a human face. They used archerfish as its a sharpshooter and can catch prey by releasing a water jet from its mouth.

Archer fish’s ability to shoot prey was used to shoot a picture of a person who is recognizable to them. The scientists showed two pictures of human faces. They wanted the fish to recognize only one. They gave them treats if fish shot at the person who it has to recognize.

After training the fish to recognize one person, the scientists took the test and the results were astonishing. Archerfish was able to recognize the familiar face and the correctness was 81%.

When they made the pictures similar by changing the color, even then the fish was able to recognize the familiar face. And this time, as correct as of 86%.

After this experimentation, scientists concluded that fish are able to recognize their owners. They can also develop a bond with their owners. Of course, not like other pet animals, but in their own way, they do love their owners, and this is quite amazing.

Structure of a fish’s brain

The fish brain is simpler than primates (mammals), yet they do have a central and peripheral system that works together for coordination.

As of brain, it consists of these parts:

Ways to bond with your fish

As fish can recognize their owners, so they also bind with them. Fish feel comfortable when their owner is around. This bonding and association are very different from other pet animals, yet it’s worth it.

So, you should really know some ways to be a lovable owner of your fish. You can bind with them by:

First things first. Fish love to eat food. Offer them a few pellets of food, whenever you visit the tank. They’ll, for sure, remember you for this generosity.

Fish will associate you with food, and as they love food, they’ll love the one who is feeding them.

The most important thing to remember is NOT to overfeed your fish. Overfeeding can cause various problems, so it’ll do more harm than good.

Playing with your fish:

Although it seems slightly unrealistic, fish enjoy playing with you. Play with the ball in front of your fish tank and they’ll jump and swim around. This is their way if telling them that they’re enjoying it.

Sitting beside the tank and talk:

Sometimes you can just sit beside your fish and talk. This will send them your voice signals and they’ll remember you with your voice. Exciting? Once they memorize your voice, they’ll react by jumping and swimming, once they’ll hear you coming.

You’ve to figure out whether your fish like to be petted or not.

Another way to help your fish recognize you is to clean their tank. They’ll feel happy in well-oxygenated water and a clean environment. Don’t wait for weeks before you change the water and clean the debris. This can really affect your fish’s health.

Pet animals like to be petted, and they develop a bond with their owners. We know about cats, dogs, and horses. But what about fish?

Fish also recognize their owners and develop a bond. Some fish even like being petted. You should know how to pet a fish, without causing it infections.

If you want to know some ways to bond with your pet fish, we’ve got you covered. Just read above, and know how to make your fish fall in love with you, it’s not that difficult!

Do fish recognize other fish?

Yes, fish recognize their environment, be it other fishes, plants or the ornaments. Fish are good at remembering the patterns, and this helps them to recognize other fish as well.

Probably not. Fish are meant to be in rivers, seas, and oceans. They like being free and swim around. But if you provide them with a clean environment and food, along with plants and ornaments, they’ll probably love it.