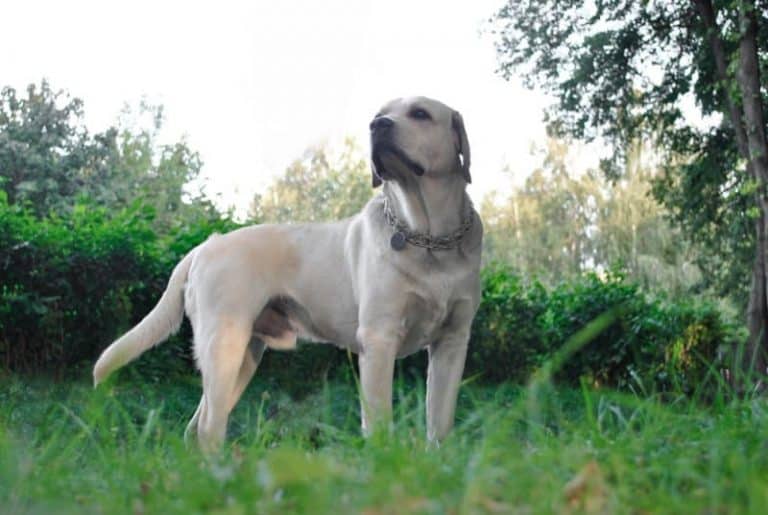 America’s most popular breed, Labradors, are known for their good nature. Their friendly personality is a notable trait, and it’s a perfect pick for a first-time dog owner.

The question, however, is, do these friendly labs protect their owners? The short answer is, yes. However, it really comes down to your lab’s temperament. Keeping the breed, age, and size aside, every dog has a different temperament.

So, while your lab will protect you, how far is it willing to go? This depends on its temperament. If you want to learn more about Labrador’s protective behavior, read ahead.

Labradors are the friendliest breeds I know, and that is one of the reasons I love them so much. But that friendliness also makes me wonder, will it protect me if some intruder breaks into the house? Most dogs are over-protective of their owners, which is why they won’t hesitate to save them in the face of danger. What about Labradors?

A Labrador will come to the rescue, but to an extent. They may bark at the person or thing that threatens you, but this is as far it goes. Generally, a Labrador doesn’t have it in their nature to attack someone. It is a friendly and playful breed; not a threatening, protective one. A Labrador is the most loyal dog you can find, but don’t expect them to fight. it is just not in their personality.

Not all Labradors are like that though. As I mentioned earlier, each dog has a different temperament. There is a chance that you might end up with a Labrador with aggressive behavior. You could notice this aggression at the hint of fear because it is amongst the few things that can make a dog aggressive. But that is not the only thing that makes them angry; frustration could also force an aggressive Labrador to lash out.

On the other hand, you do have a loyal and friendly pet that will do anything for you. Some of the mellow protective behaviors in a Labrador suggest that it could become a guard dog. I had to dig into that part, a bit more. You can learn all about whether or not a Labrador can be a guard dog or not, later on in the article.

Personality of a Labrador

To get a better understanding of a Labrador’s aggressive and passive behavior, you got to learn more about their personality.

A Labrador is a good pet, if not the perfect. The family-friendly dog is eager to make new friends, whether it is a fellow animal or a child. You can let them roam freely around children, without any worry. In fact, some Labradors are known to be overprotective of children. Plus, upon receiving your attention, it could literally swoon.

Moreover, it loves to play around, which is good because it has a lot of energy to burn. In fact, you will need to engage the Labrador in more than one exercise. A walk around the block won’t be enough to tire it out. You will need to do something more, to keep it from using its energy elsewhere – aggressively chewing toys.

What you need to know is that it has a stable temperament and a good nature. It can be aggressive at times, but only if it is really pushed to the edge.

Can a Labrador be a Guard Dog?

A guard dog is trained to protect the property or the people. Unlike a watchdog, they are not always alert. A guard dog is expected to react aggressively, but this doesn’t mean attacking anything or anyone. However, if the dog can sense any threat, it will attack.

A guard dog is normally big in size, to appear more threatening to the attacker. A Labrador is a medium-sized dog, which is good. However, it doesn’t have required temperament to be a proper guard dog. Their friendly personality can prevent them from properly attaching the threat.

To answer the question, if Labradors can be guard dogs, my answer is, a no. It may fit the physical requirements, but it fails at the mental requirements. A guard dog is supposed to be threatening and aggressive, and a Labrador is far from that image. You may use them for hunting because Labradors were also bred to be hunting companions. It can sniff out the prey and flush it out to the open field.

Can a Labrador be a Watchdog?

No, I’m not referring to that watchdog. This is about a watchdog, which is also known as an alarm dog. Unlike a guard dog, a watchdog is only meant to keep an eye out for any dangers. It is not trained to attack the threat. A watchdog is expected to stay alert at all times, and to alarm you about any intruder. It will alarm you the best way it knows how to – barking, lots and lots of loud barking.

Though Labradors can’t become guard dogs, they do make an exceptional watchdog. Lucky for you, it is a quick learner. A Labrador is really easy to train because it can quickly learn all sorts of tricks. While training it to be a watchdog, simply give your lab a treat every time it barks at you after someone comes into the house. Over time, it will naturally begin barking after spotting anyone it doesn’t recognize.

Don’t worry; it will not hurt anyone, Labrador’s are too friendly to do that. It’s one of the reasons why I love them so much. But its past experience in hunting could help it become a vigilant watchdog. You can sleep at ease, knowing that the lab is on the lookout. Just keep a bat or something close, by since the lab will only alarm you, it won’t be attacking anybody.

What is a Lab Willing to Protect?

By now, I think you know that a Lab is willing to protect you. But you aren’t the only thing it’s going to protect. A Labrador will go the extra mile to protect a couple of other things. What are they?

To be clear, when I say a lab is willing to protect, I mean that it will bark, or under some rare circumstances attack. But it’s mainly a loud and threatening bark.

Training the Labrador to Protect

Through the right training, a Labrador could even become a guard dog. It’s surprising, I know! To train a lab to become a guard dog, you can reach out to an expert. If you don’t want to go with an expert and plan to do it on your own, follow the steps below;

What is step 6? There is no step 6; all you need are the 5 steps mentioned above. A friendly tip, you could also train a friend to disguise themselves as an intruder to test if the dog reacts the way you want it to react.

What is instinct? Instinct is defined as a reaction to an event. When you’ve successfully trained the dog to bark on command, it becomes an instinct to bark, whenever you tell it to. How is it different from drive? A dog’s drive is described as a biological urge to achieve a goal or satisfy a need. In this context, a dog’s drive would be to eat food to stop feeling hungry.

To conclude, I would say, it is clear that Labradors are just not cut out to be aggressive. All you need to know is that it will protect you as long as it doesn’t have to bite/fight anyone. But it can always be trained to be a good guard dog.

Labradors were bred to hunt, and they can be easily trained. So, even though, they are naturally good-natured, you can easily train them to be good guard dogs. You just need to follow the five steps listed in the article.

Labradors are quite possibly the most loving dog you can own, which is why it isn’t in their blood to attack. It would rather be petted by the intruder than to attack him/her. On the flip side, you do have the friendliest good-natured dog. It is a great companion and loyal pet.

Are Labs protective of their owners?

Are Labs protective? Well, yes, to a degree. But they are not as protective or territorial as other breeds. They are very friendly towards people and other fellow animals. It won’t jump out at an intruder or attacker, but it may bark at it to protect you. Aggression is just not in their personality.

The color of your lab doesn’t indicate whether or not it’s protective. Your black lab will still be that same playful dog with no worries about the world. Though you don’t have the aggressive dog you want, it is still far more intelligent. It can learn commands much easily as compared to other dog breeds.

Labradors are a great dog breed to keep in the family. Their strong and intimidating appearance may convince you that it is a good guard dog. On the contrary, a Labrador is gentle and loving. They are more likely to cuddle with the intruder as opposed to attacking them. Even though it’s not in their nature to be a guard dog, you can train it to be one. 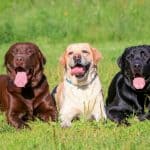 Which Lab is Best — Yellow, Chocolate, or Black? 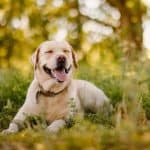 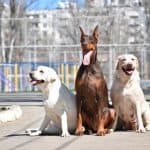 Labrador vs Doberman – Which breed is better? 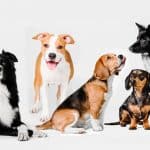 Labrador vs Border Collie — Which breed is better?