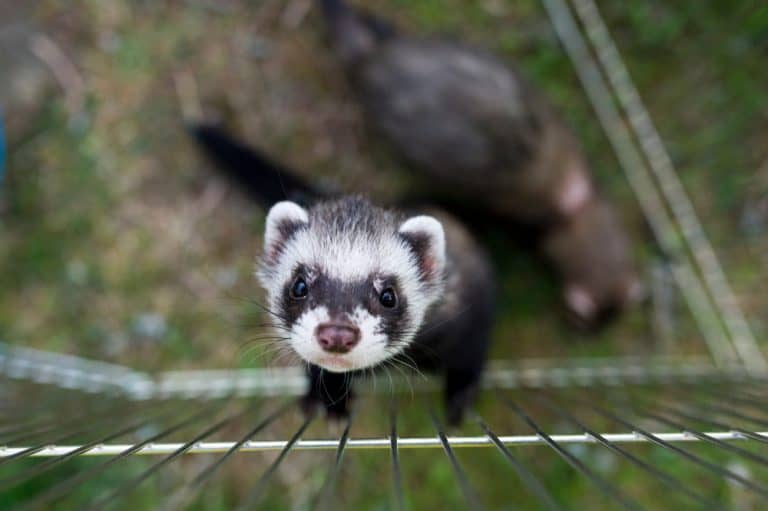 Just like humans, certain species of animals are smarter than the others. This, in fact, has been tested through studies conducted on common pet animals like cats, dogs etc. Even ferrets, like pets, have shown signs of intelligence by bonding with their owners and seeking their attention.

How intelligent are Ferrets? Ferrets’ intelligence is reflected through their curious yet persistent nature. They enjoy solving problems and are surprisingly determined to find solutions to them.

To honestly answer this question you first need to know that there is no way to quantify intelligence and there haven’t been any credible studies conducted on this subject.

But a majority of ferret owners are of the opinion that domesticated ferrets indeed show signs of intelligence through their actions and reactions to different situations.

How Smart is a Ferret?

What makes them intelligent?

I guess it is their playful and curious nature. If you have ever owned or own ferrets then you would know that they are attention seekers. They hunger for their owner’s undivided attention and time.

And this has been confirmed by ferret owners. Many of these owners have shared some really wild stories about how their pet ferrets planned and did things to stop them from going to work or just leaving them behind. We all know that they are sociable, affectionate and friendly, but how far they are willing to go for it is completely different. One of the owners, for example, told us how obsessed his ferret was about getting into the trash can.

According to him, the ferret used to hook its claws into the plastic trash can liner and dangle on it until the can be tipped over and fell because of its weight.

To stop the ferret from doing it, he said he raised the can to a height where it was impossible for the creature to reach but the ferret responded to this by using an opening through the cabinet drawers as a staircase to reach the can.

Another owner told us how he found his male ferret to be more intelligent in reaching impossible spots while the female was smart at hiding stuff at undetectable places.

One more ferret owner confirmed about their ability to climb to high spots by using different objects as a make do staircase. He mentioned how he observed one of his ferrets to regularly use a certain high spot in the room as a vantage point to check out other places which he hadn’t seen before.

Apart from their intelligent antics, there are a few more reasons why people prefer to keep them as pets instead of dogs or cats and why you should adopt one as well.

They have adorable sweet faces, mischievous eyes and a galore of cuteness in them. Their small size and furriness give them the look and feel of a stuffed toy.

Their size is also a source of attraction for many animal enthusiasts. A male ferret can grow up to 16 inches and weigh over 4 pounds if not neutered.

A female, on the other hand, can grow up to the length of 14 inches and weigh up to 2.5 pounds. Another aspect is their lifespan. Ferrets are known to live up to 8 years. In some cases, these cuddly creatures have been observed to even live up to 12 years.

Earlier, we mentioned that ferrets carry out intelligent antics. But if their problem solving curious actions do not impress you much, their lifelong kitten-like behavior will definitely win you over. You can spend hours and hours watching them play with toys. And that is not all.

It is just a bliss to see two or more ferrets interacting with each other. It’s like watching cartoons. But bear in mind that having two or more of them doesn’t mean that you have to spend less time with them.

Domesticated ferrets long for the affection of their owner. They can plan strange yet cute tactics to make sure they get your love affection.

Dogs are harder to litter train and this is the biggest reason many people prefer cats over them. If you are one of those people who would avoid a dog for this reason and cats are not your thing, then you will be glad to know that ferrets can easily be trained to use the litter box. If you are used to keeping your pets uncaged, then this is a big plus for you because once trained, ferrets will not make as much of a mess as dogs do.

Are they dangerous or do they bite?

Some people believe that ferrets are vicious creatures. They also believe that they are dangerous and can bite. This cannot be further from the truth. If they have been brought up in a domestic environment under proper care, then they are very friendly if not the friendliest.

As we mentioned earlier, they long for affection. If they are punished or beaten for their mannerisms, they are bound to show biting behavior.

Are Ferrets difficult pets and impossible to live with?

Ferrets are a little more challenging than dogs and cats, but they do make ideal pets for many people. They are small in size, do not make much noise, have a playful nature and always look cute regardless of their age.

But they are also very curious and get into things or places that are hard to reach. They often hide small things like car keys or dig up plants. But a lot of pets present such issues.

Our only concern is that they are rather expensive to keep and come with a unique set of obligations. If you are willing to dedicate your time and attention to them, they just might give you the best experience of your life.

Are FERRETS FUNNIER than CATS & DOGS? See for yourself! (Video)

Easy to Feed and Exercise

Ferret food is now more widely and easily available in pet stores and supermarkets. They can also be purchased via online retailers.

The wide availability of high-quality ferret food has also made it easy to fulfill the nutritional needs of ferrets. You also do not need to take them on a walk daily.

Thanks to their mischievous and proactive nature, they get all the exercise they need just by playing around the house. But if you want to, you can take them out for a walk.

They are great conversation starters and they can get you noticed by that girl or guy you have been wanting to get to know.

Not all ferrets are alike and this only adds to the entertainment value and companionship they provide.

Each ferret is unique and has a different personality. Some like to cuddle a lot while others enjoy their independence. If you do not own a ferret and wish to adopt one as your pet, you can explore their personalities by meeting up a few of them first and making a decision afterwards.

If you have finally decided to get a ferret, we want to share with you some questions that you might have in your mind.

Is that a rat? The cute face of a ferret resembles that of a rat, but it isn’t even related to one. Ferrets are descendants from the European Polecat and are commonly counted in the weasel family of animals that relate to otters, badgers, mink, etc.

Aren’t ferrets illegal? This is a hugely prevailing misconception about ferrets. The furry critters are only illegal in the states of Hawaii and California. However, the rest of the 48 states allow citizens to have ferrets as pets. But there are certain bans and restrictions prevailing in even these states as well. So it would be better to get a hold of your local city animal ordinance and confirm the status of ferrets in your respective area.

What if you catch rabies? Research proves that ferrets are very unlikely to spread and catch rabies. Many states and local counties have an ordinance in place that requires ferrets to be vaccinated for rabies. Additionally, if you make sure your pet ferret gets regular veterinary care, it is less likely to harbor or even be exposed to rabies.

Can Ferrets coexist with cats or other pets? You may have heard some wild tales about ferrets killing cats or even cows. This is nowhere near the truth. Ferrets are known to coexist and get along with both cats and dogs. This largely depends upon their upbringing and training. Cats, on the other hand, do not enjoy the intense playful nature of ferrets and usually flee off to a different place when ferrets get too playful. Also, there are a few dog breeds that cannot coexist with ferrets and are likely to kill them. These breeds include guard dogs, Terriers, and hunting dogs.