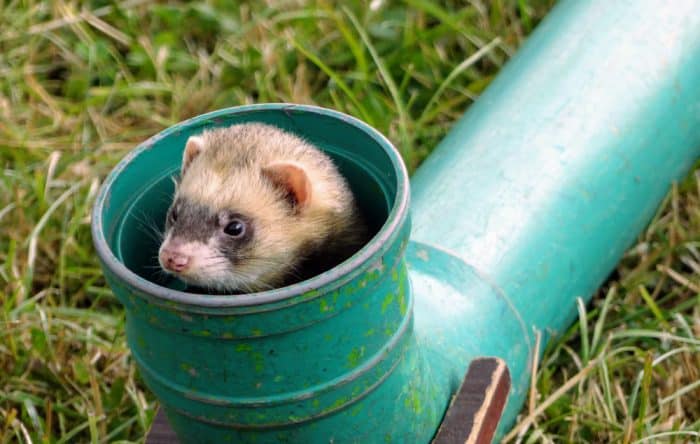 There are some minor differences between the two which help make your choice much easier.

There is no right or wrong gender, mostly it depends on what you are looking for in a pet.

So, should I Get A Male Or Female Ferret? There are no big differences between the two genders. Size and weight are some minor differences. Male ferrets grow up to be 17 inches long on average while the females are about 13 to 14 inches long. So basically the two are more or less the same.

You should keep in mind that no matter which gender you choose, male or female both need de-sexing.

This is merely for health reasons and it greatly reduces the chances of tantrums or behavioral issues of the ferret.

This article discusses subtle differences that will help you make an informed decision regarding which gender to keep as a pet.

The female ferrets are much smaller than males.

The size difference is approximately 1 kg which means the differences is between a 2.5 kg pet and a 3.5 kg pet.

Ferrets can be found in various different sizes and can even be as small as 1 kg.

The best way to know about the future size of your ferret is to observe its parents so that you know what you are in for.

The only time you will actually notice a difference between male and female ferrets is when they are not neutered.

When male ferrets go into heat, they become territorial and are very aggressive towards people as well as other ferrets.

If they are really frustrated, then they might even end up biting someone.

The ferret may also have a rather strong unpleasant odor and the ferret might also try to mark its territory.

When a female ferret goes into heat, she will continue to stay in heat until or unless she mates.

This continuous heat cycle can lead to a fatal condition known as aplastic anemia which is actually caused by high volumes of the hormone estrogen that is produced when the female ferrets are in heat.

Severe anemia results in the death of the ferret.

Should You buy a ferret?

How to tell the difference between a male and female ferret?

It is fairly easy to tell the male and female ferret apart.

Most of the ferrets that are sold are actually neutered; which means that a scrotal sac with testes in the sac will not be visible in male ferrets.

The first thing you should do is turn the ferret on its back.

There you will see a prepuce along the abdomen of the ferret. It will be three quarters from the abdomen to the head and it will be a middle line.

If your ferret is a female, you will see a small vulva next to the base of the tail.

Beside the vulva and nearer to the base of the tail will be an anus. Hence it is very hard to get confused between male and female ferrets.

The kits can actually be a handful as they sleep very little and very curious are pretty boisterous creatures.

You have to watch them constantly as they will get into everything.

You need to ferret proof your residence as the little ferrets will get stuck easily in odd places.

If you wish to purchase a baby ferret, then the ideal age to buy a kit is between nine to sixteen weeks, although many times they are sold at as young as six weeks old.

A kit that is below the benchmark of eight weeks is not ready to leave its mothers or its siblings, so waiting until they are about 12 weeks old is the best way to go.

A kit does require more patience, time and training but in time it will reward you with added adaptability and playfulness plus you will have a chance to watch it grow.

If you want a pet that is laid back and sedate than an older ferret is the right way to go.

They are not as bouncy as kits and sleep much more.

Things you should consider before buying a ferret

Ferrets serve as amazing friends for people who have a lot of time on their hands and can easily bond with their pet.

They need to be supervised for some time during the day as they have moments where they are very active and can get themselves into all kinds of trouble.

They easily amuse themselves when you are not around due to their intelligence though their mental and physical health depends on interaction and attention from their owner.

Most ferret owners are concerned about how ferrets will get along with their children as well as the other pets they might have.

Ferrets can be tricky pets for children, and they need a lot of supervision if they are around an immature child.

The child has to be mature enough to understand that ferrets behave very differently than dogs and cats.

He or she should also be able to care for the ferret. Ferrets are not recommended for households that have children under the age of 7, and its very dangerous if you have infants or babies at home.

Ferrets are natural hunters so they cannot be trained to get along with rodents, lizards, fish, rabbits and birds.

If you have any of these animals at your place, then you will have to monitor the activities of the ferret closely.

However, ferrets are easy to keep with dogs and cats.

Introduction of your ferret to your cat or your dog is to be handled very carefully.

Hold your dog or your cat in your hand and then get someone else to hold the ferret.

Allow the animals to smell one another and also provide encouragement and reassurance to your dog or cat as they will be anxious at first.

Observe the behavior of your pets. If they seem to be getting comfortable with each other, you can allow them to interact freely under close supervision.

No matter how well your pets are getting along always keep an eye on them when they interact.

The best thing to do is to feed the pets separately and do not let the ferret play with the toys of the other pets.

While the gender, color, and age of a ferret do not really matter in the long run, but the heath of the new ferret is important.

When you select your new ferret, you should make sure that the animal is healthy.

You can judge the health of the ferret by observing its appearance and its behavior.

A healthy ferret will be curious, playful and alert.

Its ears will be erect, eyes will be right and its movements should be supple and smooth.

There should be no discharge from its anus, eyes, mouth, nose or sexual openings.

Also, its mouth, ears, and pads should be clean and pink.

The ferrets that are healthy naturally only have a slightly musky odor that is produced from the gland under their skin.

They also have a scent sac present near their anus and the odor is transferred to their feces so that they can easily mark their territory.

When it comes to a comparison between males and female ferrets, the urine of male ferrets has a stronger stench.

De-scenting your ferret which is removing the strongly scented sac will not remove the musky odor and may cause health issues later on.

The ferrets that are neutered do not release their scent until or unless they are frightened or agitated.

The scent can be treated with special solvents and it dissipates rather quickly.

You can also get rid of any unwanted odor by keeping the letterbox of the ferrets squeaky clean.

Are male ferrets aggressive?  Male ferrets are normally not aggressive, but they do lash out when they go into heat. So it is best to get your ferret desexed.

Are male ferrets troublemakers? The behavioral traits of a ferret are unique to its own personality. There is no glove that fits all. Generally speaking, females are more likely to be troublemakers as compared to male ferrets.

Is it better to keep ferrets in groups? Ferrets are social animals and they are happier when they have someone else to live with. It simply relies on your discretion but ferrets foster better as couples rather than alone.

How do I buy a ferret? You can buy a ferret from a pet store, a private seller or a breeder.

Is it okay to bathe my ferret if it stinks?  Ferrets actually have a naturally musky smell. When you bathe it, you remove the oils from its skin that keep it healthy. This leads to the production of a stronger smell as compared to the one before the bath. The best thing to do is to bathe your ferret only once every couple of months with a shampoo suitable for your ferret.