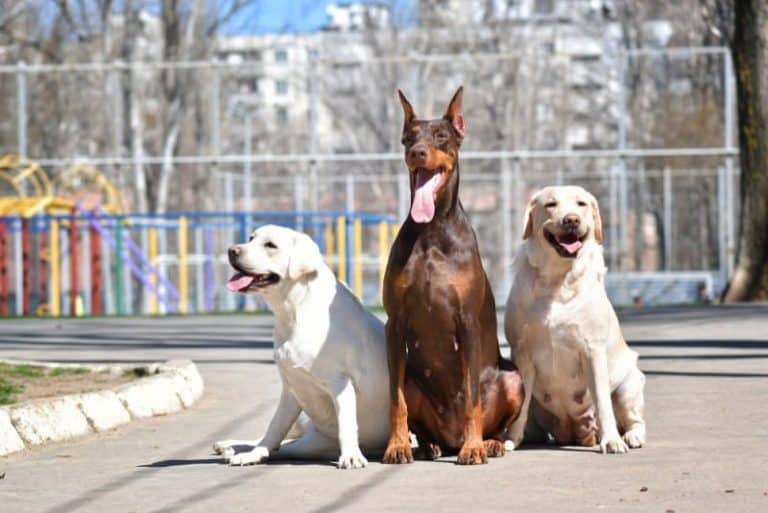 Labrador Retrievers have consistently remained the number one dog breed in the American Kennel Club rankings for a long time now. I’m not even mildly surprised that most potential dog owners would have at least considered owning a Labrador at some point. And why not? It is smart, intelligent, friendly, playful, and loyal -qualities that are most desirable in a pet dog. Perhaps, for the same reason, many people would also set Labradors as the standard, against which they compare other dog breeds they’re interested. In this post, we’ll run through the similarities and differences between Labradors and Dobermans.

The two breeds are distinct and unique. They are so different that making a comparison was really difficult. However, my own personal choice is the Labrador Retriever (I’m sure by now you must be convinced I have a bias towards the breed). I have my reasons. And I’ll elaborate them all in detail. My preference is absolutely not because Dobermans are any less amazing, it is just that they are suited to a different kind of household than mine.

The common belief about the Doberman Pinscher has always been that it is a fierce and aggressive breed of dogs. However, I beg to differ. And through this article, I will also prove why the Doberman is an amazing pet for the right kind of household. From physical characteristics to intelligence and maintenance, I am going to try to cover all aspects of both Labradors and Dobermans. Although, the main purpose is to help you decide which breed is better for you. I will also try to highlight how both the breeds are amazing in their own different ways.

Labradors, as the name implies, originated from the Labrador region in Canada. They are descendants of the St. John’s water dog, that was a sporting dog. Just like its ancestors, the Labrador is also a sporting breed, extremely adept at swimming, and collecting game after it has been gunned down. Labradors were recognized as a new dog breed in the early 1700s and were introduced in Great Britain and Europe around the same time. They gained popularity quite quickly and have maintained it to this day.

Dobermans were bred in Germany around the 1880s, and are actually a more modern breed than Labradors. While it is not well known what the actual purpose of breeding these dogs was, it is generally agreed upon that the breeder intended to breed a dog that could protect him. The Doberman is believed to have been bred from several different dog breeds, including the German Pinscher, Beauceron, Rottweiler, and Weimaraner. It is also believed to be related to the German Shepherd.

Labradors are medium to large-sized dogs, with an average weight of between 25 to 36 kilograms. The females tend to be smaller than males. These beautiful dogs come in three different coat colors -black, chocolate and yellow, and have short, but thick and silky coats. They have big broad heads, a muscular body, strong tails, and webbed feet. Because of these characteristics, the Labrador can run and swim for long distances. Because of their thick coat, Labradors can get hot very easily, and tend to love colder temperatures.

Compared to the Labrador, the Doberman is much larger and can grow to be between 30 to 45 kilos in weight. Again, females tend to be smaller and more petite than males. The Doberman has an extremely muscular, almost square body, a long muzzle, and a straight, long tail. They come in a variety of colors, but the spectrum falls in shades of black, blue, red, and tan. Dobermans have long and folded ears. Unfortunately, they have been subjected to tail docking and ear trimming quite commonly, but this practice is now illegal in most countries. The Doberman is generally happier in warmer temperatures.

The average Labrador lives to be between 12 to 14 years on average. Labradors are overall a healthy breed of dogs with very few major health concerns. However, being a large breed, and designed as a sporting breed, being inactive can make them very prone to hip and elbow dysplasia, as well as arthritis. Labradors also have a genetic predisposition towards a certain eye and muscle diseases. Of the three coat colors, the chocolate Labrador, has the shortest average lifespan and most health concerns, owing to a prolonged history of inbreeding.

The average lifespan of Dobermans is similar to Labradors, about 10 to 13 years on average. Unlike the Labrador, the Doberman is prone to quite a few potentially serious conditions. Of these, dilated cardiomyopathy, abnormal dilation of the heart muscle, is the most common and is responsible for quite a few deaths in the breed. Other health problems that these dogs can suffer from include cervical vertebral instability, bleeding disorders such as Von Willebrand’s disease, and disorders of the prostate. Less commonly, they may also suffer from hip dysplasia and hypothyroidism.

The Lab is considered by many to be the most intelligent breed of dogs. It has a very calm temperament and tends to get very friendly, very quickly. This trait may not always count in its favor though. After all, you wouldn’t want a friendly guard dog now, would you?

If you thought the Doberman is fierce, yes it is. It is fiercely loyal! Just like the Labrador, it is also counted among the top five most intelligent breeds of dogs. Sadly, the Doberman is an extremely misunderstood and notorious breed as well. Many consider it to be aggressive, ferocious and ruthless. Hearing these traits, generally, gives one the impression that the dog must have to be kept caged or muzzled at all times. But that is not the case at all. Dobermans are extremely obedient dogs and would make great pets even if you have children. Do keep in mind though that they were bred to be guard dogs, and can actually be ferocious, when given the orders.

Being large dog breeds, both Labradors and Dobermans require extensive and regular physical activity. As a sporting breed, Labradors need at least one hour of running and playing fetch every day. Failure to do so may result in them developing the bone and joint problems that I have already talked about. Similarly, Dobermans are also extremely high-energy, and require lots of physical activity. In comparison to the Labrador, the Doberman is, in fact, more athletic and energetic and may have greater physical needs.

From the cost of buying one of these dogs to their maintenance, there really is no significant financial difference between the two breeds. Both Labradors and Dobermans fall somewhere on the medium to high maintenance spectrum. From physical activity to training, grooming, visits to the vet and nutrition, you will roughly be spending similar amounts of money on either breed.

By a very narrow margin, the Doberman wins here. Labradors, although their coat is shorter, tend to require regular grooming, owing to the thickness of their coat. On the other hand, Dobermans really don’t need much heavy-duty grooming, and you won’t even have to bathe them too often. This is when you are comparing the two breeds to each other. However, if you look at them in isolation, both breeds are fairly easy to groom and maintain, and even Labradors don’t need very heavy-duty grooming. Labradors shed moderately, whereas, Dobermans shed very little.

I am yet to come across a dog breed that can beat the Labrador Retriever in this department. Without a doubt, when it comes to playfulness, Labradors always take the cake. They are famous for being ready to play with you around the clock. For this very reason, Labradors are not very suitable for families with an extremely busy lifestyle. They demand a lot of time and attention, and will feel lonely and get depressed if you leave them alone at home too frequently. Labradors can sometimes seem too independent and stubborn, which some people might not like.

On the other hand, while Dobermans are loyal and obedient, they are not emotionally as dependent on the owners as Labradors. While your Lab may even become great friends with your neighbors, it is very likely that a Doberman would only be emotionally attached to one particular family member, and may not even be too emotionally close to everyone else at home. They sometimes find it hard to be comfortable in noisy households that like to frequently entertain guests. That does not mean that it would misbehave, but if you’re looking for a dog that always wants to play with everyone, the Doberman may not be for you.

In terms of barking, while both don’t bark much, Labradors do have the tendency to become quite noisy. Both Labradors and Dobermans are fairly calm, and if properly trained, are unlikely to exhibit unnecessary aggression. Both the breeds require training from an early age, but different aspects of their nature need to be targeted during training. Overall, both breeds are among the most easily trainable dogs, but Labradors are generally considered to be easier. While Labradors need to be taught discipline from an early age, Dobermans need to be trained to properly channel their energy and anger in the right way.

Which one is more protective?

Protectiveness and loyalty are perhaps the two traits that the Doberman should have been most famous for. In my humble opinion, Dobermans are as close to ideal as a dog can get in this department. If you own a Doberman, it will guard you with its life. The poor dogs are famous for all the wrong reasons. They are immensely protective of all family members, and make excellent guard dogs. They are also highly territorial and will not tolerate any intruders in their space. Sadly, Labradors aren’t very territorial and therefore, don’t make very good guard dogs.

Labradors are like that toddler in his terrible twos that probably won’t even let you answer nature’s call in peace. They will not leave any corner of the house unexplored. On the other hand, Dobermans are the responsible older child you can count on for babysitting your younger kids as well. They tend to be a lot more well behaved. So, it really comes down to your own temperament and preferences. Both the dogs aren’t meant to be hunters and don’t have a very strong hunting drive. However, Labradors are great at fetching game if you take them hunting with you.

Compared to Labradors, Dobermans are relatively more apartment friendly. Labradors are more fond of bigger spaces, where they can freely roam around, and might not like being in an apartment too much. They also have a tendency to chew on pretty much anything that they can find, and if enclosed in your apartment all day, may end up destroying your furniture and shoes.

There you have it, a detailed analysis of the differences between a Labrador and a Doberman. I said it in the beginning, and I say it again; they are both amazing dogs. Let’s take a quick review of the major traits that I have compared above.

In the end, it all comes down to your own preferences, the kind of household, family structure, and the job you have, and what you are looking for in a pet. I wish, I could decide for you, but I really can’t. My final verdict is that even though for someone like me, a Labrador would make a better pet than a Doberman, that is not because the Labrador is better. They are both different, and exceptional in their own ways.