From sniffing bums to licking each other’s ears, dogs have some fairly unique methods of communication. While these methods may confuse and confound us, for canines, they work. And because these things are so foreign to us, we often wonder about their reasons — hoping they don’t signal something bad like health problems.

There are many reasons why dogs lick each other’s ears, and some may surprise you. Keep reading to learn more about this behavior.

Why Do Dogs Lick

Dogs rely heavily on their sense of smell and taste to explore the world. They lick each other (and humans) to convey affection and concern. Licking is a part of eating, grooming, and cleaning wounds. Dogs lick to self-soothe and to soothe others. Mothers groom their puppies to encourage them to eliminate. Licking to communicate is an innate behavior that dogs carry for a lifetime.

The modern-day dog descends from the gray wolf, a pack animal. Before dogs were domesticated, they lived in packs. Stray dogs will often form packs. Animals that live in a pack are social and need to establish effective communication. While dogs communicate vocally and through body language, licking is also common.

Licking is a way to socialize or show affection. Puppies will play with each other by playfully licking and biting. Puppies learn from their mother that licking is a sign of affection and a tool for cleaning themselves. As a result, they will lick their canine companions for the same reasons.

Why Dogs Lick Each Other’s Ears

Although licking is an age-old behavior amongst dogs, what does licking each other’s ears signify? Consider the following:

Dogs lick themselves to clean. Mothers groom their puppies, and as the puppies grow older, they groom themselves. It is common to see puppies or even adult dogs grooming each other. It’s a form of social bonding that also serves as a public health measure.

Dogs cannot reach their ears, so having a companion to lick your ears clean is a boon. Licking for grooming purposes doesn’t occur frequently or last long. It may also occur in turns, i.e., one dog licks the other’s ears and vice versa.

Dogs and cats both lick as a sign of affection. Many people ever refer to these as “kisses.” When puppies are born, they receive affection from their mothers through grooming. Even amongst each other, puppies of the same litter lick and bite each other playfully to show affection. Licking the ears is both affectionate and a way to groom their companions.

Ear licking is also a way to seek attention. Dogs who get bored and lonely might frequently lick each other’s ears. If your ears are within reach, your dog may even come up to you and lick them. To a dog, attention is attention — unless you’re one of those weird people who don’t react to having your ear licked, attention is what your dog will get. Remember that if attention is the reason for the ear licking, it will happen often.

When wolves return from the hunt, they will regurgitate the meat for the pups to eat. Puppies lick the mouths of the adults to get them to regurgitate the meat that would otherwise be too tough for the pups to eat. Licking instincts are rooted in your dog’s DNA. The ears may seem like an unusual spot to you, but dogs don’t discriminate. Since they usually explore the world with their mouth, licking the ears isn’t surprising.

Dogs will lick their humans to mark them and will sometimes mark their housemates as well. Dogs from the same family, or those who are mates, might lick each other to mark each other. Affection and grooming are still the primary reasons, but licking leaves the scent on the other dog

When dogs meet for the first time, they usually sniff each other. Your dog might be trying to ensure their scent stays on their mate or littermates. In this case, the licking could occur anywhere.

As we have discussed before, dogs are pack animals even if they don’t live in pack settings anymore. Their instincts may still propel them to act out of respect for larger or older dogs. Licking like this is an appeasement gesture. If you have multiple dogs, you will notice that the younger or smaller ones will lick the older or bigger ones.

Dogs also lick each other as a way to greet each other. It is their version of a handshake. Similarly, dogs might even wake each other by licking each other’s ears. Dogs are social animals used to living in pack settings. While their domestic lives may reduce their interactions with other dogs, they still have their unique ways of socializing with each other.

Dogs have an excellent sense of smell and can detect health concerns with their nose. They can sniff each other’s ears and discover an infection, then try to clean it by licking. Dogs also lick themselves to self-soothe, so they might do this to other dogs to help them feel better.

If one of your dogs is suffering from a medical condition or prone to anxiety, his companions will try to find ways to make him feel better. You will notice that your dog tries to lick you to make you feel better when you are sick or upset. The same applies to their canine friends. When they see one of their companions in distress, they might try to lick their ears to soothe them.

Although it is rare, some dogs can also suffer from Obsessive-Compulsive Disorder. Compulsive licking usually occurs in response to stress and anxiety and can last a long time. OCD licking is constant and is not limited to other dogs’ ears. Dogs who lick from OCD will often lick themselves raw in spots, leading to skin infections and granulomas.

Dogs licking each other’s ears is usually harmless and a sign of affection. It is rare for dogs to engage in this behavior for other reasons, but exceptions occur. If you notice one of your dogs frequently licking the other’s ears, check to ensure there are no ear infections. If one of your dogs suffers from an ear infection, it is best to prevent the other from licking it. It is unhygienic and can also cause the infection to worsen. Excessive moisture in the ear can cause bacterial growth.

If your dogs are frequently licking each other’s ears and you’re worried it could cause an ear infection, find methods to divert their attention. When one dog tries to lick the other’s ears, divert its attention with toys. You can also put peanut butter on toys to make them more enticing.

Why Some Chihuahuas Have Floppy Ears 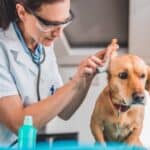 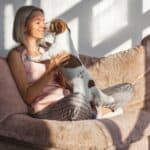 6 Reasons Your Dog Lick Your Arm So Much